The proteins in blood serum or plasma are many and are produced by various cells. The biosynthesis of the vast majority of plasma proteins takes place in the liver. A smaller part is synthesized in other cells: e.g. lymphocyte (immunoglobulins) and enterocytes (e.g. apoprotein B-48). Protein degradation takes place inhepatocytes and the mononuclear phagocytic system, where proteins are degraded predominantly after complex formation (e.g. antigen-antibody complex and hemoglobin-haptoglobin complex). Intracellularly, peptide bonds of proteins are hydrolyzed by proteases and peptidases to form amino acids. Another way serum proteins are removed is via excretion, which is facilitated by the kidneys and the gastrointestinal tract.

Plasma proteins are necessary for a variety of blood/plasma functions: 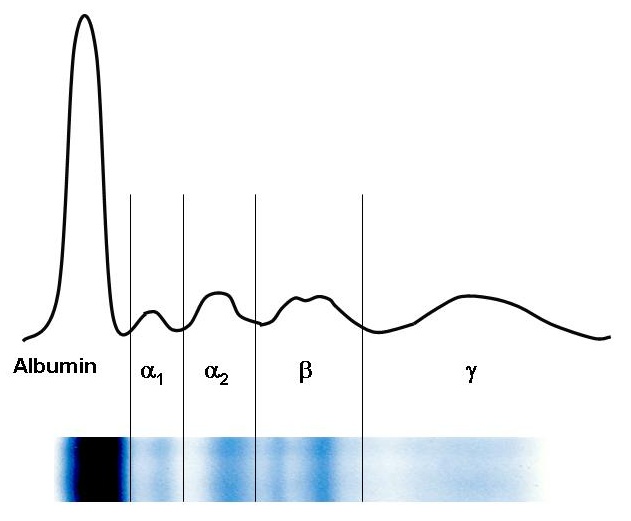 Albumin is the most common serum protein, it accounts for approximately 55 to 65% of total serum proteins (average blood concentration is 40 g/L[2]). It is synthesized in the liver and its production depends on amino acid intake.

The synthesis of albumin involves multiple steps. Preproalbumin, a precursor of albumin, is synthesized by hepatocytes within the cytoplasm. Subsequently, preproalbumin enters the endoplasmic reticulum, where it is transformed to proalbumin: the most abundant intracellular form of albumin. Next, proalbumin enters the Golgi apparatus, where it is transformed to albumin. It is then excreted out of the cell.[3]

The acute phase reaction is a physiological process that manifests itself in the systemic release of inflammatory mediators due to the development of pathologic processes (inflammation, trauma, surgeries, myocardial infarction, tumors, childbirth, excessive exercise, etc...). All the just mentioned situations can induce the increase of the concentration of certain proteins (positive acute-phase reactants) or their decrease (negative acute-phase reactants). However, the specific proteins involved and their degree of involvement will vary based on the underlying cause (e.g., bacterial infection will increase different proteins than trauma).

These mediators serve to establish an appropriate response to a certain pathologic process and mutual communication and regulation of ongoing events. Additionally, these proteins produce the general symptoms associated with the inflammatory response (fever, muscle, and joint pain). Substances whose synthesis arises as a result of a known pathology or when their concentration corresponds to the degree of tissue damage are of clinical importance. Such substances are called markers. By determining their presence and concentration, diagnoses can be confirmed, tissue damage extent can be evaluated, and therapy course can be monitored.

They can be divided into the following groups based on their effect or purpose:

The purpose of some APP is to neutralize foreign substances (including microorganisms) that cause inflammation. Examples may be:

During inflammation, immune cells (such as phagocytes) release cytotoxic compounds that may damage not only the pathogen but also healthy tissues, which would cause undesirable side effects. To avoid this damage, during the inflammatory response, the organism produces proteins that inactivate proteolytic enzymes and reactive oxygen species (ROS) mitigating the damage to its tissues. Such compounds include:

Coagulation factors and proteins that induce tissue regeneration such as fibrinogen

The purpose of some positive reactants, such as procalcitonin (PCT) remains unknown. Despite the unknown purpose, its increase of plasma concentration may be of great importance when determining the nature of acute-phase reaction. Therefore, even some substances with unknown physiological functions may be clinically useful.

The rate of increase of acute-phase proteins[edit | edit source]

These are proteins with a very short biological half-life. Changes in their plasma concentrations are evident as early as 6-10 hours after the onset of the pathology. The rise usually peaks during the second and third days. The main representatives are CRP and SAA. More recently, PCT is used in clinical practice

C-reactive protein (CRP) is one of the most important acute-phase proteins in diagnostics. This protein primarily functions in opsonization - it forms insoluble complexes (precipitates) with C-polysaccharide of pneumococci (thus earning the name C-reactive protein).[4]

Physiologically, the plasma concentration of CRP should not exceed 8 mg/L.[5] Acute bacterial infections (and rarely mycotic infections) cause a quick and sharp increase of CRP (usually above 60 mg/L, typically up to 200 mg/L, higher concentrations reveal a higher extent of infection). On the other hand, a viral infection usually leads to a minor increase of CRP in plasma (usually below 40 mg/L, sometimes the CRP values remain unchanged).[6] Plasma concentration of CRP increases as early as 4 hours after the beginning of the acute-phase reaction. Moreover, within the first two days, its concentration can increase to more than 1000-fold its physiological concentration. Peak concentration is reached between 24 and 48 hours. The determination of plasma concentration of CRP, therefore, is helpful in early decision with antibiotic therapy.[4] Additionally, the biological half-life of C-reactive protein is approximately 24 hours; therefore, CRP concentrations in plasma closely reflect the course of the acute-phase reaction.[7] If antibiotic therapy is successful, CRP plasma levels will quickly decrease. Otherwise, CRP levels will remain high or keep increasing.

Plasma concentrations of CRP can be used to identify the beginning post-surgery infections. Although CRP may be elevated after the surgery even without any infection, the third day after the infection, the CRP values should return to normalcy. If the return of CRP to its physiological values is slow (or absent), an ongoing infection may be present.

A mild increase of CRP may be observed in myocardial infarction. Generally speaking, mildly elevated CRP values (usually up to 10 mg/L) may be a marker of increased cardiovascular risk.[8] CRP values may be increased in autoimmune diseases and may be used in their long-term monitoring.[9]

The main disadvantage of CRP evaluation is its relatively low specificity. Additionally, CRP does not reflect the magnitude of the acute-phase reaction as well as procalcitonin does. These two markers are, to an extent, complementary.

Recently, procalcitonin (PCT) has reached a major interest in clinical practice. This 116-amino-acid-long protein (13,000 g/mol) is synthesized by the C cells of the thyroid gland as a precursor of calcitonin. During inflammation (e.g., generalized bacterial inflammation), this molecule can be synthesized by other cells throughout the body, especially by neuroendocrine cells of the lungs and intestine, but also in other organs [10]. As a result, during a bacterial infection, the plasma concentration of this protein increases. Procalcitonin synthesized during infection or sepsis is not converted into calcitonin.[11] The exact pathophysiological role of procalcitonin remains unknown, but it has been speculated that it can play a role in inflammation regulation and that it has an analgesic effect. The half-life of procalcitonin is 1 day and its concentration in plasma rises up to 20-fold of its physiological values as soon as 2 to 3 hours after the initiation of the acute-phase reaction. The increase of procalcitonin concentrations can be seen only in generalized bacterial, mycotic, or protozoal infections, but not during viral infections. A minor increase of PCT in plasma can be seen after polytrauma, burn patients, or after major surgeries of the abdomen.

PCT can be assessed using highly sensitive PCT-LIA (Luminescence Immunoassay). This method uses two monoclonal antibodies, one of which has an affinity towards the C-terminal sequence of procalcitonin, and the other has an affinity towards the central part of the procalcitonin. Antibodies against the C-terminal sequence are immobilized on the surface of the test tube, while the antibodies against the central part of procalcitonin are soluble and then these are traced with a fluorescent dye. This method requires a luminometer; and approximately 20 μL of serum or plasma.

A quick method for the assessment of PCT is immunochromatography for procalcitonin (PCT-Q). This method requires 200 μL of serum or plasma and the result is available within 30 minutes. This test is recommended for quick diagnostics of acute pancreatitis.

PCT can be elevated after surgeries, multiple traumas, heat-induced tissue damage, or cardiogenic shock. Additionally, elevated PCT can be seen in neonates within the first 48 hours past birth.[11]

The comparison of PCT, CRP, IL-6, and WBC shows (all of which can be used as markers of acute inflammation) that PCT is both the most sensitive and selective marker to diagnose and distinguish bacterial and non-bacterial infections.[12]

These are proteins whose concentrations increase 12 to 36 hours after the beginning of the acute-phase reaction and peak at the end of the first week. This group encompasses orosomucoid, α1-antitrypsin, haptoglobin, and fibrinogen.

These encompass the complement proteins C3 and C4, and ceruloplasmin, among others. Their plasma concentration increase 48 to 72 hours after the beginning of the acute-phase reaction and peak 6 to 7 days afterward. These markers are not as valuable in diagnostics as early markers of the acute-phase reaction, but they inform physicians about inflammation that has been present recently or an infection that has been progressing for a long time.

The main examples are albumin, prealbumin, and transferrin. Such markers are diagnostically less important than positive APP for monitoring and evaluating the course of the inflammatory response. However, they are often used as a criterion for protein synthesis in the liver and as indicators of malnutrition.

Antibodies (immunoglobulins) are specific blood plasma globulins with β-γ electrophoretic mobility. They are synthesized by plasma cells as a humoral component of the immune response to a particular antigen. An immunoglobulin molecule has the ability to specifically bind the appropriate antigen against which it has been generated for. After binding, an immune complex is formed. In addition, immunoglobulins perform other functions including, for example, complement binding, binding to neutrophilic leukocytes and macrophages, activation of phagocytosis. Immunoglobulins are divided into 5 classes IgG, IgM, IgA, IgD, and IgE. In addition, the IgG class is further divided into 4 subclasses - IgG-1, IgG-2, IgG-3, IgG-4. Also, there are 2 IgA subclasses: IgA-1 and IgA-2. The basic structure of an immunoglobulin molecule consists of two identical heavy chains (H-chains), denoted by the individual classes γ, μ, α, δ, and ε, and two light chains (L-chains): κ and λ, which are common to each class. Each immunoglobulin molecule contains either κ or λ chains, not both. During the first infection with bacteria or protozoa, IgM antibody production occurs within 2 to 3 days. This is eventually replaced by IgG production with the same specificity within 5 to 7 days. Subsequent infections will cause a rapid increase in IgG levels and a small increase in IgM levels. Significant changes in the concentration of immunoglobulins manifest in electrophoretic examination such as in:

A basic measurement of proteins in plasma or serum is the assessment of total serum/plasma protein. However, this examination's merits are rather limited. More information can be retrieved if the proteins are first separated (usually via electrophoresis) and then quantified.

Serum protein electrophoresis (SPEP) is a separation method based on the movement of charged particles within an electric field. The compounds of interest need to be charged (i.e. they must either be ions, or ampholytes). Most proteins have ampholytic nature; therefore, their net charge can be positive or negative with the variance of pH of the buffer during electrophoresis. Once a mixture of various charged molecules is exposed to a stationary electric field, individual ions will start moving towards either electrode. The velocity of movement of ions depends on the following factors:

Usually, a mixture of protein is separated during electrophoresis at pH 8.6 (using alkaline buffer). Because the isoelectric point of most serum proteins is near 5 to 6, at pH 8.6, all proteins are negatively charged, therefore, they will move towards the anode (positive electrode).

Blood serum electrophoresis usually separates proteins into 6 to 7 fractions: prealbumin (seen rarely), albumin, α1, α2, β1, β2, (sometimes poorly resolved, may be seen only as β fraction), and γ fractions. With the exception of albumin and prealbumin fractions, which contain only single protein each, these fractions consist of multiple proteins with similar electrophoretic mobilities.