An antibody is a proteinaceous substance belonging to the immunoglobulin family. It specifically binds to the antigen. The resulting bond has the character of non-covalent interactions. During a specific humoral-type immune response, these substances are formed by B-lymphocytes and  plasma cells, which arise from B-lymphocytes as part of terminal differentiation. Immunoglobulins are found in vertebrates in blood serum, body fluids and also on the surface of B-lymphocytes. Antibodies have short half-lives - from 2 to 23 days. They play a crucial role in the body's defense.

Antibodies are used to defend against:

They activate some components of the immune system: 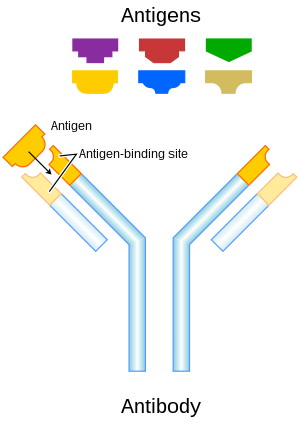 Each antibody is composed of two identical heavy chains (designated H as heavy) and  two identical light chains (L according to light). Light and heavy chains differ in the number of amino acids and  molecular weight. The chains are linked together by covalent disulfide bridges. The whole macromolecule has the shape of the letter ypsilon with swinging arms. We always find one disulfide between the light and heavy chains; there is usually a different number between the two heavy chains - depending on the class and subclass of the antibody. Immunoglobulin chains can be divided into several according to certain similarities in the structure of homologous domains.

They consist of a  variable and a constant domain - these are called VL and  CL. They occur in two types: κ and  λ. These show some differences in the constant range. In one immunoglobulin molecule, both chains are always of the same type. In humans, the type κ is more common.

They always have one variable domain and three (IgA, IgD, IgG) or four (IgE, IgM) constants. Similar to light chains, VH and  CH1-4 are referred to herein. For the division of antibodies into classes (IgA, IgD, IgE, IgG, IgM), the type of heavy chain that is present in the molecules is authoritative. There are five of these species - they are usually denoted by Greek letters (α, δ, ε, γ, μ). They differ in both composition and size. The constant region, formed by constant domains (Fc fragment) in the predominant heavy chains is identical in all antibodies of the same class. The variable region varies according to the B-cell clone by which it is produced. The sugar components of the molecule bind to the heavy chain.

The light and heavy chain variable domains form a binding site. In fact, both chains do not occupy the conformation shown in the figure but are twisted into compact globules, so-called immunoglobulin domains. The cause of this internal rotation is disulfide bridges. Opposing domains always have a homologous amino acid sequence.

Immunoglobulin molecules can be cleaved by the plant enzyme papain. This takes place on a heavy chain in the so-called hinge area. The antibody can be divided into three parts:

Antigens can bind to Fab fragments, and Fc fragments bind to receptors on the surface of leukocytes. Similarly, antibodies are cleaved by pepsin, but then one Fc fragment and one bivalent Fab fragment are formed.

The antigen specifically binds to the variable regions of the heavy and light chains. These allow immediate contact. These are actually cleats of the chains at their N-termini. They are the cause of spatial complementarity, reminiscent of the specific bond between the enzyme and the substrate.

The antigen-antibody complex is not bound covalently, but only by non-chemical interactions. The formation does not correspond to stoichiometric conditions. If a precipitate is formed, its maximum amount corresponds to the equivalence zone - however, if there is an excess of any of the components, the amount of precipitate already decreases, because the optimal spatial network is not arranged (see figure). However, in some other types of interactions, immunocomplexes may be soluble.

It is very different. Some are so large that we can observe them with an electron microscope. Small complexes have a short half-life, do not bind complement and are not pathogenic. Medium-sized complexes are deposited in tissues and can thus be a characteristic feature of various diseases.

It can also cause:

In some cases, binding of the appropriate immunoglobulin may partially or even completely neutralize the bacterial toxin.

Antibody production and their other functions[edit | edit source]

The human body is capable of producing more than a million different antibodies. This huge diversity is not only caused by genes (there are only hundreds of them) - but each L-chain is the product of at least three separate genes, the H-chain of four.

Antibodies are active in several ways in defending the body. Immunoglobulins bound to surface antigens, e.g. in a microorganism, attract the initial fragments of the complement cascade (C1) and thus activate it in a classical way. This causes the death of the bacterium by two mechanisms:

Immunoglobulins also form one of the components of lymphocyte receptors, BCR and  TCR:

It is composed of its own surface immunoglobulin, with Ig heavy chains (most commonly IgM or IgD) crossing the membrane and associated signalling molecules - they also cross the membrane, these are referred to as Igα and  Igβ. They are associated with Janus-type cytoplasmic tyrosine kinases (JAK). The binding of the antigen to at least two BCR molecules brings the associated proteins closer together, activates the tyrosine kinases and triggers the signalling cascade.

Composed of an immunoglobulin-like antigen-recognizing module - it is composed of transmembrane α and  β or γ and  δ chains and associated with the CD3 complex of associated proteins. T-lymphocytes with α-β type TCR receptors can only recognize antigen when bound to the surface of antigen-presenting cells, in complex with MHC II proteins.

According to the construction of the constant part of the heavy chain, we divide antibodies into classes. There is a significant difference between individual Ig classes in the representation of carbohydrates:

IgG is the most important class of antibodies. It makes up ¾ all antibodies in the serum, its concentration is 10 g/l. It creates 4 subclasses (IgG1-4), which differ from each other in their opsonization properties, binding to complement and the time for which they are active. It is also the only class of antibodies capable of crossing the placenta. Therefore, newborns have the same values ​​as adults. The lowest level in a healthy individual is between the 3rd and 6th months of postnatal life (transient hypogammaglobulinemia). This leads to the susceptibility of newborns to infectious diseases.

IgA antibodies are also called mucosal antibodies. This is because B-lymphocytes are produced , which occur in the mucous membranes. Their serum concentration is 1.5 g/l, but overall they are the most abundant antibodies in the body. Their half-life is about 1 week.[1]

IgA antibodies are structurally similar to IgG. Their molecule consists of 2 light and 2 heavy chains. Light chains consist of 1 variable and 1 constant immunoglobulin domain. The heavy chain consists of 1 variable and 3 constant domains. Unlike IgG, they can occur as monomers , more often as J-chain-linked dimers. The dimeric form of IgA occurs in serum, when IgA is secreted to the mucosal surface, it is still associated with the so-called secretory component. It is a protein attached to a normal IgA dimer and protects the antibody against cleaving enzymes.[1]

IgA does not have the ability to activate complement.[1]

IgM antibodies make up 10% of all antibodies in the serum, with a concentration of 1-1.5 g/l. IgM monomer is an integral part of the B-cell membrane (BCR). IgM has a short half-life, unlike IgG, they remain in plasma only shortly after the antigen is eliminated.

The whole IgM antibodies form a pentamer, the individual subunits are connected in a circle by cystine bridges and one J chain. Due to this structure, they do not penetrate into the tissues, they remain in the vascular bed. Theoretically, this arrangement creates 10 antigen-binding sites, in practice five are usable, and the others are spatially blocked. The subunits have a similar structure to IgE antibodies, their heavy chain consists of 1 variable and 4 constant immunoglobulin domains.

At the onset of a specific immune response, they are generated first, their production does not require isotype switching. If a fetus infection occurs, IgM is present at birth. There is a small amount of secretory IgM production.

IgM has no opsonization function. It is especially effective against bacteria and  viruses

Monomeric antibody. It is relatively under-represented in serum. It has a relatively low affinity for antigens. It is found mainly on the surface of B-lymphocytes, where it has the function of a receptor for antigen - it forms BcR (B-cellular receptor). It induces the release of histamine from mast cells and basophilic leukocytes. After binding to the antigen, it also participates in the development of hay fever or allergic asthma.

Of all the antibodies, it has the shortest half-life. We find it in an amount even lower than IgD (serum concentration 0.5 g / l) - this also causes its short catabolic half-life. It is homocytotropic - it soon binds to other cells of its own body (mast cells, basophils) to FcεRI receptors. In the bound state, it is far more stable than a free one. It releases mediators of inflammation (histamine, serotonin, prostaglandins, leukotrienes).

IgE antibodies are responsible for early hypersensitivity reactions. Their increased concentration is common in allergic (atopic) reactions. They also have a role in antiparasitic defense (stimulates processes of expulsion): mediators, vasodilation, coughing, gutting, increased intestinal peristalsis, diarrhea. They occur especially in the spleen, tonsils, mucous membranes of the lungs and mucous membranes of the gastrointestinal tract.