Bacteria are ubiquitous prokaryotic organisms with a size of 0,3–10 μm.

Bacteria belonged to the evolving chain of life on Earth. They originated about 3 billion years ago and affected both the development of the environment and the development of other species, as infections are important factors in selection. More than 2000 species of bacteria have been described. They do not have a nuclear membrane or nucleolus. Transcription and translation take place almost simultaneously in the cytoplasm. They have an irreplaceable role in ecosystems: 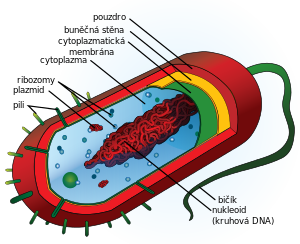 The cytoplasm of prokaryotes has a similar composition to eukaryotic cells. However, there are no membrane structures in it. Bacteria lack the classic cytoskeleton.

Different ribosome structures can be used in antibiotic treatment. Such antibiotics include, for example, streptomycin, tetracycline, chloramphenicol, erythromycin, etc.

The number of ribosomes is proportional to the cell growth rate (constant translation rate of about 13 amino acids per second). At present, 1 mRNA of its kind (1000 in total) is present in the cell. They have a short lifespan (several minutes), but at the same time they have a quick adaptive response. Transcription and translation can take place simultaneously..

One or more small circular chromosomes that are not essential for the survival and division of the bacterium are called plasmids. They are genetic endosymbionts. The plasmid has the ability to integrate into the chromosome. There may be 1-100 plasmids (plasmid number) in the cell. They may contain genes that alter the properties of the bacteria.

The cell itself is not able to create a plasmid - it can obtain it:

Degradation and oxidation of toxic substances, antibiotic resistance, heavy metals, production of antibiotics, toxins, formation of restriction and modification enzymes. They are used for their great replication capacity as vectors in genetic engineering.

Spores can be found in some bacteria (Bacillus, Clostridium).

Bacterial DNA is found freely in the cytoplasm, it is not enveloped by a membrane, so we are not talking about the nucleus. It consists of one circular chromosome. It is in the so-called nucleolar region and is attached in one place to the cytoplasmic membrane (OriC). This place is called mesosome.

The DNA of the double helix is ​​enclosed in superhelicity - physiological is negative, ie more loose, negative superhelicity is maintained by enzymes topoizomerázami (I – releases, II – produces with ATP consumption). The double helix consists of about 3 Mbp with a length of about 1-2 mm (the degree of spiralization depends on the transcriptional activity of the genes that lie in the section). The size of the bacterial genome is species-specific, ranging from six to eight thousand genes.

During division, DNA attaches to the mesosome. DNA duplication is subject to negative regulation - dilution of the replication inhibitor in a growing cell volume. When DNA is damaged, the SOS regulatory system is activated. There is only one haploid chromosome in the resting non-growing cell, mRNA unmodified - high transcription rate.

The bacterial wall is made up of several layers. Because the cytoplasmic membrane is an essential component of all bacteria, other components of the bacterial wall may or may not be present. Their presence may increase the pathogenicity of the microbe.

It consists of a phospholipid bilayer permeated by transmembrane proteins and glycoproteins. It does not contain cholesterol and at lower temperatures there is a higher proportion of unsaturated fatty acids. It has the function of transmembrane transport, the respiratory function (it represents the mitochondria), it anchors the rotor of bacterial flagella.

The main components of the bacterial wall are peptidoglycan polymers (mureins), composed of long disaccharide and shorter peptide chains, which together form a kind of lattice. The wall ensures the shape of the bacteria and allows them to survive in a hypotonic environment.

Its composition depends on whether the bacteria appear to be G+ nebo G-.

It is present in most bacteria, it does not occur in mycoplasmas and L-forms of bacteria.

Information on the structure of the bacterial wall is essential for the choice of antibiotics in the treatment of bacterial infections.

They occur only in some bacteria. Their structure and function differ from eukaryotic locomotor organelles.

Extracellular polymers only occur in some bacteria (eg. E. coli). The presence may be a determining factor in the pathogenicity of the microbe (Haemophilus influenzae). Formation is influenced by the environment. Glycocalyx has a polysaccharide character (pneumococci, klebsielly, hemophilia…). Bacillus anthracis is made up of polypeptides. It is shown by negative coloring (ink). Colonies have a mucous appearance.

Only in some bacteria. It consists of polysaccharides. It has a protective function.

Distribution of bacteria according to flagella

[edit part] Bacteria multiply by asexual division, very fast. The length of one reproductive cycle is 20–150 min (the more favorable the conditions, the shorter the cycle). Reproduction is regulated by the amount of nutrients and concentrations of bacterial metabolism products. Asexual division begins with cell elongation and replication of the bacterial ring chromosome. Replication begins at the OriC – the site of attachment of the chromosome to the plasma membrane. The genetic identity of clones (daughter cells) is limited by random mutations. The formation of a new section of membrane between these two attachments pushes the newly formed daughter chromosomes apart. Thus, there may be a situation where the cells move away sufficiently and a septum is formed, or the two daughter cells separate from each other - the so-called plate division.

It runs in both directions against each other, it is semi-conservative. Synthesis and repair are controlled by DNA-polymerase. Leading strand leads from the 5 'to the 3' end, synthesis continuously. Lagging strand – the synthesis of Okazaki fragments – they are connected by ligase. The enzymes involved in bacterial DNA replication are:

The DNA-dependent RNA polymerase binds to the sigma factor promoter.

Ribosomes are smaller and structurally different from eukaryotic ribosomes (antibiotics act selectively only on bacteria), so it is very fast – ribosomes attach immediately to unfinished mRNA

Bacteria have the ability to adapt to environmental change (intrusion into the host), which is a two-step process – sensor > activator / represor

Bacterial mutations are point or larger changes - deletions, inversions, insertions. Many mutations lead to disruption of the metabolic pathway – auxotroph (does not grow on a culture medium where the product is missing). There is also the possibility of beneficial features – the ability to withstand bacteriophages, chemicals or ATBS. Mutations are divided into spontaneous and induced mutations

They are small, circular DNA molecules independent of the bacterial chromosome with separate replication. They carry several dozen genes that are not essential for the bacterium:

Recombination is the interruption and reconnection of DNA with the exchange of its segments. May be:

New genes are introduced and exchanged between a pair of homologous DNA sequences. We distinguish here transposons, integrons.

Movement within the genome and from the plasmid to the chromosome, is called „jumping genes“. By moving tr. certain genes can be started and stopped. They differ from the virus in that they lack a reproductive cycle, from the plasmid's inability to self-replicate and exist outside the chromosome. After incorporation – mutation, may carry stop codons, termination sequences, promoters.

Some bacteria change their properties by rearranging their own genes. We then distinguish between local inversion and gene conversion, eg in gonococci (Neisseria gonorrhoeae), when the antigenic composition changes, new serotypes are formed. There are a number of genes for antigens, only one is functional and the others are defective - multiplication and rearrangement of genes → a functional gene becomes defective and one of the defective ones becomes functional.

The shape of bacteria 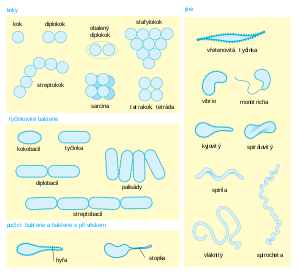 Types of bacteria and their way of life

Bacteria are equipped with numerous chemoreceptors → they respond by movement (positively / negatively) to:

They act as decomposers in the process of recycling substances in nature. It feeds on decomposition products and dead organic matter. As parasites they can cause infectious diseases in plants and animals.

They are able to obtain energy through photosynthesis or oxidation of inorganic substances. The enzymatic equipment of bacteria is diverse - it corresponds to the environment to which they have adapted with their development.

They are able to live on minimal soil and synthesize all the substances needed for life.

Biochemical loss mutations cause bacteria to be able to grow only in an environment that contains a substance that they are unable to synthesize.

According to the need of oxygen we divide bacteria into:

The importance of bacteria in medicine

E. coli is a rod-shaped bacterium that moves with the help of flagella. It is part of the intestinal microflora of all warm-blooded animals. It has its place in the large intestine and the lower part of the small intestine. As part of the intestinal microflora, it is beneficial to humans. It produces a number of substances that prevent the spread of pathogenic bacteria. In addition, it is involved in the production of certain vitamins. Humans have been colonized by this bacterium since birth.

This bacterium plays an important role in insulin production. (Insulin from pigs for slaughter used to be used for treatment. Due to allergic reactions, insulin production was switched to using genetically modified E. coli.) In addition, it is used in the preparation of human growth hormone, Lyme disease vaccine, amino acid production, parathyroid hormone and calcitonin. Probiotic E. coli strains can be used to treat infections caused by adherent invasive E. coli and in the treatment of Crohn's disease.

In genome engineering bacteria can help us due to the fact that they contain a small amount of DNA – plasmids. We isolate plasmids from the bacteria, attach parts of the DNA from the chromosomes of animals and plants to them, and use them to produce proteins that the bacteria themselves are unable to produce. In this way, for example, insulin and other important substances can be synthesized with the help of bacteria. Abroad, they produce insulin and growth hormone in this way.