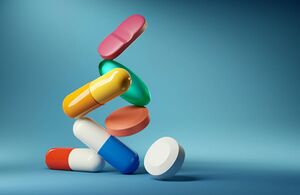 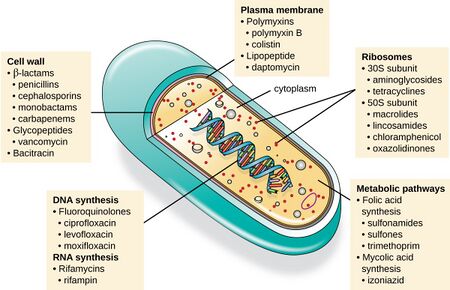 Mechanism of action of antibiotics

Antibiotics are substances that inhibit the growth (multiplication) of microorganisms (bacteriostatic) or kill them (bactericidal). They are produced by bacteria or fungi. Their semisynthetic derivatives are also effective. More broadly, they include other antimicrobial agents, i.e. chemotherapeutics (synthetic substances) - sulphonamides and quinolones.

The division between bacteriostatic and bactericidal is not entirely accurate, as many bacteriostatic antibiotics are also bactericidal in higher concentrations (chloramphenicol in meningococcal infection). Conversely, some bactericidal antibiotics do not kill certain bacteria even at high concentrations (penicillin G for Enterococci). Another aspect is the classification of antibiotics into groups according to their pharmacotherapeutic effect: antistaphylococcal, antipseudomonad, antianaerobic, antituberculous, etc.

The basic requirement for antibiotic therapy is optimal antimicrobial effect with minimal toxicity to the host, i.e. high selectivity of action. This can be achieved in several ways: 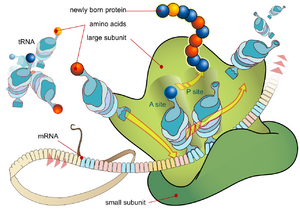 Synthesis of protein on ribozomes (translation)

Bacteria, unlike animal cells, have a cytoplasmic membrane covered by a cell wall that varies in structure, thickness and quality from strain to strain. The structure of the cell wall determines the Gram staining pattern and distinguishes Gram-positive and Gram-negative microorganisms.

The cell wall is essential for the survival of the microbe. It maintains its shape and ensures an optimal intracellular environment (high intracellular pressure). Damage to it (e.g. by lysol, detergents) or inhibition of the formation of any of its components leads to a breakdown of its function, even to cell lysis. This is particularly possible in grampositives.

Gram-positive microbes have a cell wall composed of a thick layer of interconnected peptidoglycan chains. The base of the peptidoglycan is a polysaccharide chain consisting of N-acetylglucosamine and N-acetylmuramic acid, to which is attached a polypeptide chain terminated by the 2 amino acids D-alanyl-D-alanine (D-Ala-D-Ala). The compact barrier is formed by cleavage of the terminal D-alanine and linking the rest of the polypeptide chain to the chain of the adjacent peptidoglycan - transpeptidation. This reaction is catalyzed by an integral penicillin binding protein (PBP). The synthesis of free peptidoglycan takes place on the inner side of the cytoplasmic membrane, transpeptidation on the outer side.

The cell wall of Gram-negative microorganisms is different. It consists of a layer of peptidoglycans (weaker than in gram-positives) supplemented by an outer phospholipid membrane that may prevent the penetration of hydrophilic antibiotics (penicillin G) to the binding protein. Hydrophilic antibiotics affect Gram-negative bacteria only if they are able to penetrate the transmembrane pores (porins) of the outer membrane (e.g. ampicillin, amoxycillin).

The ability to violate the integrity of the cytoplasmic membrane of bacteria (Gram-negatives due to polymyxins) or fungi (due to polyenes, azoles, amphotericin B) leads to the leakage of endogenous substances extracellularly and the subsequent death of the microorganism.

The selectivity of the effect is due to inhibition of protein synthesis by bacterial 70S ribosomes.

Normal protein synthesis on ribosomes (translation) occurs in several steps. The stimulus for initiation is the binding of the mRNA initiation codon to the smaller subunit of the ribosome (30S). The tRNA with a complementary triplet of bases (anticodon) is extracted from the free-living activated amino acids (bound to the tRNA) and binds to the mRNA initiation codon, forming the so-called initiation complex. In the next step, the acceptor site A (aminoacyl) on the larger subunit of the ribosome (50S) is released. This is bound by a tRNA that carries an anticodon complementary to another triplet on the mRNA. The enzyme peptidyltransferase is part of the larger subunit. It catalyzes the cleavage of the initial (N-terminal) amino acid from its tRNA and transfer to the next activated amino acid bound at the A site to form a peptide bond. The initial tRNA is released from the ribosome into the cytosol. The process described above produces a dipeptide bound to the tRNA. Now an elongation factor called translocase intervenes, which shifts the tRNA-bound dipeptide to the so-called donor (peptidyl) P site along with the entire mRNA chain, performing the translocation. The process repeats until a stop codon is placed on the small subunit. The information carried by the mRNA is read simultaneously by several ribosomes grouped along the mRNA strands called polysomes.

The MIC is the smallest measured amount (concentration) of an antibiotic that inhibits the growth and multiplication of bacteria in the test medium. The MBC corresponds to the lowest measured concentration of the antibiotic in vitro that will kill the exposed bacterial culture within 24 hours. Both concentrations are determined for bactericidal and bacteriostatic agents. For strong-acting bactericidal antibiotics, the differences between MIC and MBC are small. Proof of the reliability of the bactericidal effect is given by a subsequent culture test on agar media where no bacterial colonies are allowed to grow.

In order for the in vivo effect of an antibiotic to be sufficient, the minimum concentrations of the antibiotic in the target tissues must be consistent with the MIC and MBC values. In some cases (aminoglycosides, quinolones) the intensity of the antibacterial effect is directly proportional to the plasma and target tissue concentrations. High concentrations are not beneficial for the therapeutic effect, on the contrary, they burden the patient with the risk of adverse and toxic reactions. For most antibiotics, the duration of exposure is important for the therapeutic effect.

An important feature of some antibiotics (aminoglycosides and β-lactams) is the post-antibiotic effect (PAE). This refers to the period of time during which bacterial multiplication ceases under conditions where the bacteria are no longer exposed to the antibiotic (no measurable concentration of the antibiotic in body fluids or tissues). The nature of this phenomenon has not yet been reliably explained.

Adverse effects occur at usual doses and recommended pharmacotherapeutic plasma concentrations. Toxic effects occur after high doses, due to high plasma concentrations, possibly with increased patient sensitivity. They can usually be avoided or their clinical manifestations mitigated. The risk of toxic effects is acceptable in the presence of life-threatening diseases, unless another, safer antibiotic is available.

Another risk is the development of resistance (resistance) of microorganisms to the antibiotic.

The policy on the use of antimicrobials relates to:

The treatment of chronic infections is based on a correct diagnosis and identification of the infectious agent. This procedure allows for so-called targeted antibiotic therapy. First, the causative organism is isolated and then its susceptibility to antibiotics is determined. From the possible active substances, the one with the narrowest spectrum of action and the lowest possible toxicity (penicillin G in the case of pneumococcal infection) is selected. Chronic infections tend to be caused by highly resistant agents (pseudomonads or staphylococci).

In acute infections, targeted antibiotic therapy is rather the exception. In these cases, we usually choose empirical treatment (without bacteriological evidence of the causative agent). Empirical treatment consists of choosing the antibiotic that most closely matches the expected spectrum of pathogenic microorganisms and has the necessary pharmacokinetic properties. For example, different antibiotics are chosen for the treatment of wound infections, usually caused by staphylococci or streptococci, than for the treatment of urinary tract infections, usually caused by enterobacteriaceae, where the antibiotic needs to be renally excreted and reach high concentrations in the target tissue.

For life-threatening infections, where it is necessary to induce a sufficient effect as quickly as possible without knowing the causative agent, broad-spectrum antibiotics (imipenem, ciprofloxacin) or combinations of antibiotics that together cover a broad spectrum (cefotaxime + piperacillin) are indicated. This procedure is used for sepsis, peritonitis, infected gangrene, extensive infected burns, dangerous postoperative infections, endometritis, adnexitis and febrile abortion. Knowledge of the underlying or intercurrent disease is equally important for the correct choice of antimicrobial agent. It is necessary to search for risk factors, especially history of allergic reactions. Changes in the function of the eliminating organs due to pathology or abnormal conditions, e.g. low or high age, immune status, etc., are important. We relate this information to the pharmacological properties of the antimicrobial substance, i.e. its pharmacokinetics and pharmacodynamics (in particular potential adverse and toxic effects).

The ever-expanding range of antibiotics and the lack of insight into their therapeutic benefits tempt physicians to prescribe drugs with an unnecessarily broad spectrum and potent effect. In addition to the development of multidrug resistance, this trend has also led to a substantial increase in financial costs. A more fundamental change should be the introduction of a categorisation of antibiotics into groups: a - essential = essential b - alternative c - reserve and the development of binding treatment guidelines for specific diseases.

It is based on the knowledge of the causative agent, the localization of the infection and the condition of the patient. Usually, continuous treatment for 7-10 days is sufficient. Therapeutic success is demonstrated by a decline in clinical and laboratory signs of infection (mainly temperature). However, in some chronic processes (osteomyelitis, tuberculosis, etc.), antibiotic therapy may take months. In an effort to reduce the risk of adverse effects, improve patient cooperation (compliance) and reduce the cost of therapy, single-dose regimens have been developed for the treatment of minor, uncomplicated infections (e.g. gonorrhoea, lues). For this purpose, bactericidal antibiotics with a longer t1/2 (e.g. ceftriaxone, ciprofloxacin) or antibiotics with a sufficiently long postantibiotic effect (spectinomycin in gonorrhoea) are suitable. A perfect proof of efficacy and safety of this procedure is a prerequisite. Prematurely discontinued antimicrobial therapy is one of the main factors involved in the emergence of resistance in bacterial strains.

We distinguish between single dose (dosis singula, pro dosi), daily dose (dosis pro die) and total therapeutic dose (dosis curativa). The size of the dose is determined by the nature of the infection and the properties of the antibiotic (its pharmacokinetics and pharmacodynamics), the current condition of the patient (determined mainly by the function of the eliminating organs), the age of the patient and the route of administration. In clinical practice, the dosage recommended by the manufacturer is usually used, but may be influenced by the commercial interests of the company. For this reason, recommendations from independent clinical studies are considered to be the most relevant.

Dosage adjustments can be made according to two principles:

The route of administration depends on the pharmacokinetic properties of the antibiotic, i.e. its absorption, distribution and elimination, as well as the patient's condition and the nature of the infection.

Combination of drugs implies the use of two or more antibiotics at the same time. It is indicated for several reasons:

1. sequential blockade - by simultaneous inhibition of successive metabolic processes essential for the life of the bacterium (trimethoprim + sulfonamide),

3. increasing antibiotic penetration into the bacterium (combination of β-lactam antibiotics with aminoglycoside).

The basic principle of monitoring antimicrobial therapy is to monitor the clinical status of the patient. Above all, it is necessary to look for signs of therapy failure, for the development of adverse or toxic effects, which may be reversible in the first phase. Monitoring of plasma concentrations is recommended:

To ensure rational antibiotic pharmacotherapy, it is necessary to know the results of culture and resistance determination.

It manifests itself clinically by persistence of temperature, pain, inflammatory manifestations or completely new symptomatology. The most common causes of failure are:

The most commonly used abbreviations of antibiotics[edit | edit source]