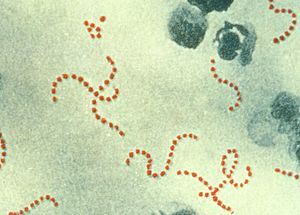 Streptococcus pyogenes is G+, facultatively anaerobic,β-hemolytic coccus, which grows in pairs or forms chains. He belongs to Group A '(according to Lancefield). It is primarily pathogenic to humans and is the only natural source of infection. It is the cause of infections of the respiratory tract, skin, systemic infections and the cause of post-streptococcal sterile sequelae.

Wall polysaccharide based on N-acetylglucosamine and rhamnose, which determines belonging to group A (serological classification according to Lancefield). Antibodies that form against it can attack the surface of the heart valves. It can be detected in a throat swab using a rapid test (so-called Streptest) already in the office and thus help the doctor identify the cause of the infection and initiate appropriate treatment.

It is the main antigen determining the virulence of the strain. It is a fibrous structure protruding from the bacterial wall, there are different serotypes. It allows adhesion to the mucosa and protects bacteria from phagocytosis. It is associated with the development of rheumatic fever or glomerulonephritis (probably due to antigenic similarity to the membrane of the renal glomeruli). It has anti-phagocytic properties - it contains sites for the binding of the regulatory factor complement in H and fibrinogen. Inhibits the complement cascade.

F-protein and other adhesive molecules

They cause Scarlet fever and function as superantigen.They over-stimulate the cells of the immune system, there is a rise in temperature, overproduction of various mediators of inflammation, suppression of the antibody response, etc., toxic shock may occur. They increase sensitivity to endotoxin.

It is responsible for β-hemolysis on blood agar. It kills leukocytes that phagocytose streptococcus, non-immunogenic.

There are enzymes that activate fibrinolysisand allow penetration into tissues. They used to be used for treatment of thrombosis.

It is another enzyme that facilitates spread in tissues.

It cleaves DNA from broken cells. Antibodies are formed against it, which can be detected and are therefore used for diagnosis.

It is an enzyme that prevents complement from functioning properly.

Children with young adults (about 10% of the population) often have asymptomatic carriers. However, the presence of streptococcus is limited by the natural microflora and antibodies against protein M in the bacterial wall.

The so-called sterile sequelae are diseases that occur after streptococcus is no longer present. The cause of their formation is complex, they probably involve the effect of some bacterial products (eg streptolysin O and S) and affect the patient's immune system. The disease is caused by the similarity of bacterial antigens to host antigens and due to the deposition of immunocomplexes, ie antigen-antibody complexes, in tissues. The body then begins to damage its own tissues. These include:

The development of these consequences can be prevented by timely and properly managed antibiotic treatment.

The prevalence of "Streptococcus pyogenes" in the pediatric population is 15 to 20%, depending on the region, and lower in the adult population. Asymptomatic carriers are not at risk of developing supurative or non-supurative complications and are not considered an essential reservoir for the spread of streptococcal infection. Therefore, there is no need to identify or treat these asymptomatic carriers. It is not recommended to perform control cultures after therapy (cost-benefit).[2][3]

S. pyogenes is well sensitive to antibiotics, the drug of first choice is penicillin. In the case of penicillin allergy, treatment with macrolide antibiotics (eg clarithromycin) or lincosamides is possible. If the infection is severe, accompanied by tissue necrosis, surgery is appropriate.

Vaccine against infections caused by S. pyogenes is not currently available.

Diagnosis is performed by culture, microscopy and serology. Can be supplemented with biochemical and bacitracin tests.