Phagocytosis is the ability of cells to absorb foreign particles, microbes or damaged cells.[1] Phagocytoses are capable of cells involved in non-specific immunity of organism - antigen presenting cells, monocytes, from which individual species macrophages (Kupffer cells, histiocytes, microglia and others), and white blood cells (neutrophilic leukocytes, eosinophilic leukocytes). These cells are capable of diapedesis and transition to damaged tissue, where they form shells and absorb unwanted particles and cells.

Cells primarily intended for phagocytosis are referred to as professional phagocytes. These include neutrophils, eosinophils, monocytes → macrophages. They form the basis of cellular non-specific immunity and play a central role in inflammatory response. 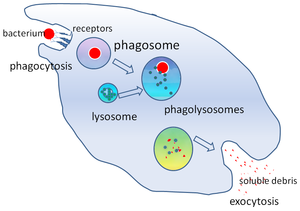 The rate difference in intervention is that granulocytes act immediately and macrophages only after signal activation, for example: (cytokines, T-lymphocytes, interferon- gamma; TNF). Neutrophils live short (6–12 hours), macrophages long at various stages - in the circulation or in tissues. The fraction of circulating neutrophils corresponds to the fraction of neutrophils adhered to the vascular wall. Of the total number of neutrophils, only about 7% are peripheral and the rest can be found in the bone marrow, where they can be gradually washed out as needed by the body. The ratio of circulating and medullary neutrophils is altered by inflammatory cytokines and bacterial products.

The phagocyte is trapped on the surface of endothelial cells of inflamed tissues thanks to adhesive molecules that are expressed under the influence of inflammatory cytokines → penetrates the tissue (diapedesis = extravasation) → active movement to the site of damage. Movement is controlled by chemotactic, substances released at the site of inflammation.

Phagocytes target the site of inflammation according to a chemotactic gradient.

For all these substances, there are relevant receptors on the surface of phagocytes; stimulation of the receptors causes chemotaxis and subsequent activation of phagocytosis. Phagocytes in the tissue actively move towards the site of inflammation (they secrete hydrolytic enzymes → they break down the components of the intercellular mass). This shift occurs through reversible adhesive interactions - the contractile fiber system (actin, tubulin). The neutrophils that completed the task soon die and the remains are removed by other phagocytic cells (macrophages). Dead neutrophils form a pus. Macrophages repeat phagocytosis several times.

Phagocytes recognize structures on the surface of the microorganism, but not on the damaged cells themselves. These recognition structures include, for example: lipopolysaccharides, teichoic acids (in all G + and G- bacteria), mannans (in yeast). Non-immunological phagocytosis

Antibodies bound to the microorganism recognized.

Activation of complement on the surface of microorganisms
Deposition of fragments of complement proteins (especially C3). Complement is recognized. receptors. Antibodies and complement fragments act as opsonins - they refer to the particle as foreign. Mannose-binding lectin (MBL), fibronectin, fibrinogen, CRP, amyloid P,… also act as such.

Induced by Fc-receptors and complement receptors.

The process of phagocytosis[edit | edit source]

The phagocyte first contacts a foreign particle through a small part of its surface through its receptors. It gradually bypasses it with its pseudopodia until the particle is finally completely surrounded by the surface membrane of the phagocyte - enclosed in a newly formed vacuole = phagosome. The process depends on the intracellular rearrangement of contractile proteins. Phases of phagocytosis:

During the formation of the phagosome and especially after its fusion with lysosomes (azurophilic granules), which contain a lot of bactericides (defensins), hydrolytic enzymes (cathepsins, lysozyme) in pH 4–5,…

During phagocytosis, the neutrophil dies (pus is formed), yet it secretes a number of cytokines that act on other cells. It is a producer of vasodilators, and thus helps the immune system by causing swelling, redness, fever, improving blood flow to the tissue,…