It is oxygen-carrying pigment in the red blood cells. Its molecular weight is 64,450. Hemoglobin is a globular molecule which is made up of four subunits. Each subunit contains heme (an iron-containing porphyrin derivative). Each heme molecule is conjugated to a polypeptide which is called the globin. In each hemoglobin molecule there are 4 chains of polypeptides (2 pairs). In hemoglobin A, which is normal adult human hemoglobin, the two polypeptides are called α chains and the other two, β chains. One can also write Hb A, α2, β2 .

Hb is synthesized inside developing RBC's(In immature RBCs Cytosol) during Intermediate normoblast stages- It begins in the proerythroblasts and continues slightly even into the reticulocyte stage. Chemical steps in the formation of hemoglobin:

The average hemoglobin A content in blood is around 15 g/dL. In the whole body of 70-kg man, there are around 900 g of hemoglobin. 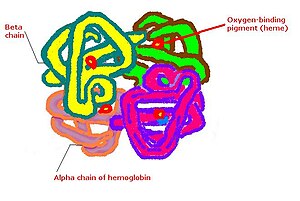 After birth, fetal hemoglobin is replaced (most of the time) by hemoglobin A. In certain people, it persists throughout life. Its oxygen content is greater than adult hemoglobin (Hb F binds 2,3-BPG less avidly). It facilitates movement of oxygen from maternal to the fetal circulation (at later stages of gestation - more oxygen is needed).

When old red blood cell (after 120 days) are destroyed, the globin portion is split off, the heme portion is converted to biliverdin and after that it is converted to bilirubin. Bilirubin is a bile pigment which is released into the blood and later secreted by the liver. The iron from the heme is either reused for hemoglobin synthesis or excreted out by the body.