A typical property of most lipids and steroid substances is their poor solubility in water. They therefore occur in the blood plasma in the form of hydrophilic lipoprotein particles - complexes of triacylglycerols (TG), cholesterol u (CH) and its esters (CHE) with amphiphilic phospholipids (PL) and proteins. The second possibility is the binding to albumin, which occurs in the case of free non-esterified fatty acids (FFA). 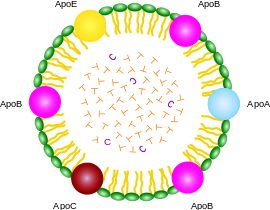 Lipoproteins are spherical particles formed by a nucleus and a shell (wrap,envelope).

Hydrophobic triacylglycerols and cholesterol esters are concentrated in the core of the lipoprotein particle. The envelope is composed of molecules of more polar phospholipids and unesterified cholesterol and one or more molecules of specific proteins called apolipoproteins, shortly apoproteins. Protein binding to lipids is non-covalent, so that apoproteins and lipids can be easily exchanged between particles. Apoproteins are indicated in capital letters and Roman and Arabic numerals are reserved for further classification, eg apo A I, apo A II, apo B 100, apo B 48. Lipoprotein particles in the blood differ in the content of the lipid component and the type of apoprotein.

Either different lipid content or different protein charge sizes can be used to separate lipoproteins.

Chylomicrons are the largest lipoprotein particles with the lowest density. During electrophoresis, they remain at the start and float ("float" on the surface) during ultracentrifugation. TAGs represent almost 90% of the total lipid component of chylomicrons; the rest consists of phosphospholipids, cholesterol and its esters with higher fatty acids. Protein accounts for about 1-2%. Chylomicrons are a product of enterocytes and serve to transport food triacylglycerols from the intestine through the lymphatic system to the bloodstream. By the action of lipoprotein lipase in the capillary endothelium, fatty acids are released from the TAG of chylomicrons and delivered to muscles and fat cells. Part of chylomicrons is also exogenous cholesterol whitch can serve as a source of a cholesterol as well as the cholesterol produced in our body (endogenous). Under normal circumstances, they are not detectable in serum after 12 hours of fasting. Their presence in the blood is manifested macroscopically by the milky turbidity of the serum, which we call chylose. If we leave the serum in the refrigerator overnight, the chylomicrons come to the surface and form a milky turbid layer on the surface of the serum chylomicron test.

VLDL (very low density lipoproteins) are formed mainly in liver. They have a slightly higher density than chylomicrons. The lipid component is around 90% and 10% proteins. The core of VLDL is rich in triacylglycerols, which are synthesized in the smooth endoplasmic reticulum of hepatocytes. To a lesser extent, cholesterol is also incorporated into the newly formed VLDL, and other molecules of cholesterol esters are then obtained from HDL particles in the circulation. The role of VLDL is to provide fatty acids released from triacylglycerols by lipoprotein lipase to muscles and fat cells. After hydrolysis of triacylglycerols lipoprotein lipase, VLDL changes to IDL and then to LDL. The presence of VLDL in serum results in opalescence.

LDL (low density lipoproteins) are formed from IDL particles after hydrolysis of the remaining triacylglycerols liver lipase, but some are released into the systemic circulation. The only apoprotein on the surface is apoprotein B-100. The lipid component in them makes up almost 80% with a predominant content of cholesterol esters. Proteins are represented by 20%. Therefore, the LDL density also increases. Their main function is to transport cholesterol to peripheral cells. Removal of LDL from plasma is accomplished by LDL receptors, which are located on all cells, mostly on the surface of hepatocytes. In healthy individuals, LDL particles contain about 2/3 of total cholesterol. This fraction is made responsible for the deposition of cholesterol in the subendothelial space of blood vessels and thus for the development of atherosclerotic changes (LDL; "bad" particles). Cholesterol in LDL particles (LDL-cholesterol) is significantly involved in the development of atherosclerosis. Due to the increased level of LDL in the blood, their increased penetration through the vascular endothelium into the intima of the arterial wall, where their structure is modified in various ways. Modified LDL are phagocytosed by macrophages, which are transformed into so-called foam cells. This process is the first phase of the atherosclerotic process. The highest atherogenicity is characterized by small dense LDLs, which are smaller and denser with a diameter below 25.5 nm and easily penetrate the endothelium, have a reduced affinity for LDL receptors and easily undergo various transformations. The occurrence of small dense LDL is associated with increased concentrations of triacylglycerols. The determination of LDL-cholesterol is especially recommended for evaluating the risk of atherosclerosis if the levels of total cholesterol are elevated and is the basis for deciding on the method and monitoring of treatment.

HDL (high density lipoproteins) ensure the removal of excess cholesterol to the liver. They are produced by the liver, to a lesser extent by the intestine, as so-called "nascent" disc-shaped HDL, consisting only of a phospholipid bilayer and apoproteins. Disc-shaped HDL particles take cholesterol from peripheral cells and convert to HDL of the cholesterol-rich spherical type, which is transported to the liver. HDLs are the only ones able to bind free cholesterol from the cell membranes in the subendothelium and transport it back to the liver. This way, HDL particles are involved in the reverse transport of cholesterol from the periphery to the liver, from where it, as it is, is excreted into the intestine (HDL cholesterol is not used for synthetic or construction purposes). This results in the antiatherogenic action of HDL particles (HDL; "good"; particles). An increased concentration of HDL-cholesterol reduces the risk of atherosclerotic changes in the arteries but a reduced concentration below 1.0 mmol / l represents an increased risk for the development of atherosclerosis.

Lipoprotein (a) is a lipoprotein whose concentration in the blood is genetically determined. It is similar to LDL particles, but in contrast, a special apoprotein (a), which is partially homologous to plasminogen, is attached to apoprotein B100 by a disulfide bond. It slows down and prevents the activation of plasminogen to plasmin, thereby blocking the breakdown of fibrin. Therefore, elevated concentrations of Lp (a) have a proatherogenic effect and concentrations above 0.3 g / l are considered to be an independent factor increasing the risk of atherosclerosis.