Thyroid hormones – 3, 5, 3'- triiodothyronine (T3) and 3, 5, 3 ', 5'- tetraiodothyronine (thyroxine T4) - are iodinated amino acids. In the blood, they are transported mainly bound to plasma protein and act through nuclear receptors in the target organ. They regulate gene expression, tissue differentiation and overall development. In the body, they regulate gene expression by mechanisms similar to steroid hormones. 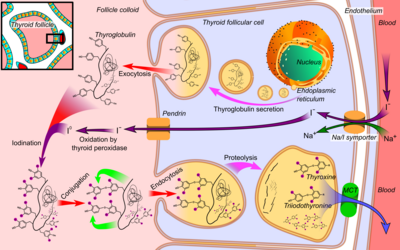 Thyroglobulin is a precursor of T4 and T3. It is a large iodinated glycosylated protein. It consists of 2 subunits. It contains up to 115 tyrosine residues, each of which can be iodinated. 70% of iodides is in the form of inactive precursors - monoiodotyrosine (MIT), diiodotyrosine (DIT). 30% in the form of iodothyronyl residues - T4 and T3. When there is enough iodine, T4 predominates over T3. Thyroglobulin is synthesized in the basal parts of thyroid cells and moves into the lumen of thyroid follicles, where it is stored as an extracellular colloid. It then re-enters the cells and is hydrolyzed (by acidic peptidases and proteases) to the active hormones T4 and T3. These are released from the basal parts of the cells, apparently by facilitated diffusion. Iodide from inactive precursors - monoiodotyrosine (MIT), diiodotyrosine (DIT) is released by deiodase (NADPH-dependent enzyme).

It consists of several steps:

Most T4 and T3 in the blood are bound to thyroxine-binding globulin (TBG-major) and thyroxine-binding prealbumin (TBPA). The bond to the transport proteins is non-covalent. TBG is formed in the liver and its synthesis increases after stimulation with estrogens. Phenytoin and salicylates compete with the binding of T4 and T3 to TBG. T3 binds to target cell receptors with ten times greater affinity than T4 and is therefore considered the major metabolically active hormone. At the periphery, about 80% of the circulating T4 is converted to T3 or reverse rT3. Other pathways of hormone metabolism are complete deiodination and inactivation by deamination and decarboxylation.

The mechanism of action[edit | edit source]

Hormones bind to high-affinity specific receptors in the nucleus of target cells. A significant effect is to increase overall proteosynthesis and induce a positive nitrogen balance. Like steroids, thyroid hormones induce or repress proteins by increasing or decreasing gene transcription. T3 and glucocorticoids enhance STH gene transcription. Very high concentrations of T3 inhibit proteosynthesis and cause a negative nitrogen balance.