Cystic fibrosis or mucoviscidosis is a multisystem genetic condition, which in its classical form manifests itself in chronic progressive diseases of the respiratory tract and lungs , insufficiency of external secretion of the pancreas , high concentration of electrolytes in sweat and male reproductive disorders. 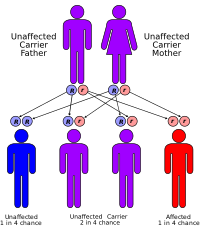 Cystic fibrosis is the most common life-threatening hereditary disease of the white race. The incidence in the Czech Republic is estimated at 1: 2,500, so 35–45 children with CF are born each year (but all cases are not diagnosed).

The defective cystic fibrosis transmembrane conductance regulator CFTR gene mutation results in a high concentration of chlorides and sodium in the sweat. In the respiratory tract, GIT and reproductive system, increased concentrations of chloride anions lead to excessive sodium reabsorption. Sodium is passively followed by water, which dehydrates the mucus and thus increases its viscosity. Most clinical manifestations of CF can be easily explained by mucus thickening. Periciliary fluid should normally be hypotonic, in CF it is isotonic, which impairs the ability of bactericide and the action of antimicrobial peptides (defensins). This explains the initial bacterial colonization. The infection stimulates the cells to produce more mucus, thus worsening the airway obstruction.

Fatty acids play another role – there is a disparity between arachidonic acid (there is more) and docosahexaenoic acid in the body. This plays a role mainly in the regulation of inflammation.

The clinical picture depends on the age at which the first symptoms appear:

They can manifest at any stage of life. In infants it is usually critical, with severe Bronchiolitis. Atelectasis and pneumonia also occur. In later life the most common manifestation is a cough (dry, irritating or productive, associated with purulent expectoration). It is caused by exacerbations of lung infections. Young children swallow and vomit sputum. Some still cough, others have a cough-free period. Exacerbations are rarely accompanied by fever. A sensitive indicator of worsening airway damage is tachypnea.

The causes of respiratory infections are most often S. aureus, Hemophilus, Pseudomonas or Burkholderia (very resistant to ATB). Pseudomonas commonly occurs in the external environment and patients are mainly inhabited by its mucosal form. The prevalence of pseudomonas infections increases with age. They are often transferred from one CF patient to another, and therefore strict separation of CF patients is recommended. Pseudomonas is not dangerous for healthy individuals. Some strains ofBurkholderia cepacia cause the so-called cepacia syndrome (septic with dispersed pneumonia), which quickly leads to death from abscessing pneumonia and sepsis. Fungal complications (Aspergillus). are not rare either. These infections cause serious chronic changes - permanent damage to the capillaries and the walls of the airways. Chronic bronchitis is complicated by bronchiectasis, Atelektasis and emphysema or chronic pansinusitis, often accompanied by nasal polyposis.Stick- shaped fingers develop early.

manifests itself mainly by failure and this subsequently adversely affects the course of respiratory infections. The main cause is insufficiency of the external secretion of the Pancreas, that the food is not sufficiently cleaved. Children have a balloon-raised belly that contrasts with the wand. The stools are bulky, greasy and foul-smelling. Children have a good appetite, but they do not increase (disproportionately to what they eat). This most often occurs during the transition to artificial nutrition, but pancreatic insufficiency may not be present and will manifest later, or if there is a great appetite, failure may be compensated.

There are also deficiencies of vitamins A, D, E, K, minerals a trace elements.

manifest themselves in varying degrees of severity. They are caused by obstruction of the bile ducts. They can result in cirrhosis and portal hypertensis. It sometimes manifests as cholestatic jaundice, cholelitiasis and GER are common. Recurrent pancreatitis is mainly described in patients without a secretion defect. Other manifestations

Diagnosis is based on:

A clinical suspicion arises from the main symptomps of cystic fibrosis, which must give rise to suspicion:

The sweat test is based on stimulation of sweating by using the pilocarpine iontophoresis, collecting of the sweat and a analysis of chlorides. Normal values of chloride are 10–30 mmol/l, cystic fibrosis is characterised by values above 60 mmol/l. During pilocarpine iontophoresis, a direct current of 4 mA is used. Via this current, the pilocarpine is driven into the skin and it reaches the sweat glands, thus stimulating sweating. Sweat is collected after the iontophoresis is finished in the place of the positive electrode (the anode).[2] All patients with a positive test should undergo an analysis of the genotype.

Genetic testing is most commonly performed on leukocytes from venous blood of children and adults, or from the cells of the amniotic fluid or the chorionic cells in case of a prenatal diagnosis. It is necessary for the confirmation of the diagnosis. It makes it possible to detect carriers in a high risk family, based on which a targeted prenatal diagnosis can be offered.

Examination of pancreatic function is not necessary for the diagnosis of cystic fibrosis, it is however necessary to decide on a possibility of substitution treatment. Quantitative examination of faecal fat loss is used. Examination of stool for presence of elastase via ELISA.

Airway secretion microbiology should be performed at every examination, in order to infection in a timely manner.

X-ray of the lungs is characteristic, it is performed when an infectious complication is suspected, and it is also performed regularly once every year. Bronchovascular markings are multiplied, hiluses are enlarged. Pus filled bronchiectasis and emphysematous bullae indicate severe damage. Signs of emphysema (especially in the side image) occurring mainly retrosternally and retrocardially are significant. HRCT can be used for better diagnosis.

Blood gas tests are also regularly used for an early detection if respiratory insufficiency. Pulse oximetry also works as a guide (in case of saturation under 92 % we indicate Astrup).

Inflamatory markers are regularly monitored, aswell as liver tests twice per year, annual ECG tests, vitamin levels of A and E. In children older than 10 years, we also examine glucose intolerancy oGTT, bone age and USG of the liver.

Since October 2009, a test for cystic fibrosis has been part of prenatal screening.

The treatment must be intensive and comprehensive, the child must be dispensed (ideally once a month, at least quarterly). The treatment of respiratory manifestations consists mainly in the fight against infection and care for airway patency. It is important to prevent, such as vaccinations, especially against the flu, and and to support coughing, for example with "Flutter", which is a „ball“, that vibrates when you exhale and thus improves the movement of mucus in the bronchus.

When exacerbating a respiratory infection we initiate targeted, intensive antibiotic therapy. To achieve a therapeutic serum concentration, a CF patient needs higher doses. For the first seizure of Pseudomonas we use per os ciprofloxacin (30 mg/kg/day) and colistin by inhalation. Fluoroquinolones are rarely used in pediatrics because they damage the growth cartilage. They are indicated only for CF and vital indications. In children chronically infected with pseudomonas, we give ATB 3-4 times a year for 14 days, etc. ATB, regardless of the clinical condition (combination -aminoglycoside + beta-lactam, or cotrimoxazole). We essentially avoid monotherapy because it often leads to resistance.

Anti-inflammatory treatment consists mainly in the administration of NSAIDs (corticoids are effective but have many side effects). Ibuprofen is given at a dose of 20-30 mg / kg twice a day. Airway patency, dilution of secretions, is ensured by inhalation of mucolytics (N-acetylcystein, bromhexin, ambroxol). Purulent secretion dissolves recombinant human deoxyribonuclease very well (dissolves DNA from decayed PMNs), administered by inhalation.

Bronchodilatators are less common than other chronic obstructive diseases because they can sometimes cause bronchial colapse. They are indicated exclusively for patients with a positive bronchodilatation test.

Home oxygen therapy is used in patients with persistent hyposaturation.

Lung transplantation is the last resort for patients who do not hope to live for more than 2 years. It is indicated when it is impossible to influence the course with conventional treatment, a decrease in FEV1 below 30 and at the patient's request. Bilateral sequential lung transplantation from cadaveric donors is usually performed. Lung lobes from living relatives begin to be transplanted (2 donors - half a lung each). 70-80% survive the first year after transplantation, 50-55% survive 5 years. Most patients have a significantly better quality of life after transplantation.

It is important to take care of good nutritional status, starting from the first days of diagnosis. The patient needs about 40% more energy (of which 35-45% is to pay for fats, mainly vegetable fats). Emphasis is placed on hearty breakfasts and snacks, second dinners, adequate fluid and salt supply. If the condition does not improve orally, we choose a nasogastric tube or percutaneous gastrostomy. We serve fat-soluble vitamins (vitamin K – we serve 2-5 mg per week until one year of age). Pancreatic substitution in the form of microtablets coated with an acid-resistant layer, which dissolve only in the distal duodenum – contain various concentrations of pancreatic enzymes (mainly lipase). Medicines are given before each meal (except fruit).

The forecast has improved significantly in recent decades. The length of survival is determined by the rate of progression of the lung disease. Today they are born to hope to survive 40 years.

The relatively high incidence of G551D and CFTRdel21kb mutations in the CFTR gene in patients with cystic fibrosis in the Czech Republic may be related to the representation of descendants of the Slavic and Celtic ethnic groups in the current Czech population.[3] [4] Among linguists and historians who do not find support for such an interpretation of genetic research in their disciplines, there is more skepticism about the interpretations described above.[5]