Pneumothorax is defined as the presence or air or gads in the pleural cavity, that is, in the potential space between the visceral and parietal pleura of the lung, resulting in partial or total collapse of affected lung.

This means that the pneumothorax develops for no apparent reason in an otherwise healthy person. This is the common type of pneumothorax. It is caused by rupture of a cyst or a small sac ( bleb) on the surface of the lung. This is due to a tiny tear of an outer part of the lung. These are like small balloons of tissue that may develop on the edge of a lung. The wall of the bleb is not as strong as normal lung tissue and may tear. Air then escapes from the lung but gets trapped between the lung and the chest wall.

Traumatic pneumothorax occurs after an injury to the chest: 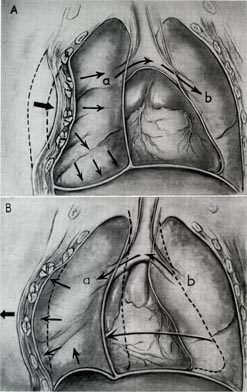 Fail Chest is the condition when during a thoracic trauma three or more ribs are broken at more than one place. This causes a paradoxical motion. Fail chest does not mean that the patient will also suffer from pneumothorax but eventually due to the paradoxical motion and the sharp ends of the ribs due to the trauma there is a high probability of traumatic pneumothorax.

Pneumothorax while underwater: While SCUBA (self contained underwater breathing apparatus) diving the pressure exerted on the lungs gets higher with depth (1 Atm /10meters). In a case when a diver holds his breath and he ascends the air in his lungs will expand and this will cause first the alveoli to burst and if the pressure build up increases the lung will tear and there is a possibility of pneumothorax and collapsed lung. 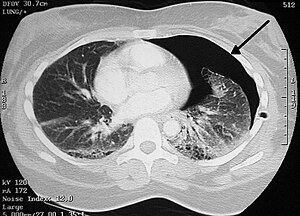 Deep sulcus sign can only be found when the patient is in the supine position since is the only case when the air will collect to the anterior part of the chest. It presents in the costophrenic angle and may have a sharp angular appearance (Star)

Treatment of pneumothorax it depends on the scale of the pneumothorax and also if an underlying disease is present:

- usually no specific treatment needed.
- Observation is recommended and after 7-10 days chest x-ray should be done.
- If pain present painkillers may be needed.

- The common method of removing the air is to insert a very thin tube through the chest wall with the aid of the needle ( Some local anesthetic is injected into the skin first to make the procedure painless. Lidocaine) A large syringe with a three-way tap is attached to the tube that is inserted through the chest wall. The syringe sucks then expelled. This is repeated until most of the air of the pneumothorax is removed.
- Sometimes a larger tube is inserted through the chest wall to remove a large pneumothorax. This is more commonly needed for cases of secondary spontaneous pneumothorax when there is underlying lung disease. Commonly , the tube is left place for few days to allow the lung tissue that has torn to heal.