Bronchiolitis is a severe acute obstructive respiratory disease characterized by edema the mucous membranes of small bronchi and bronchioles and increased mucus production caused by viral infection. A characteristic manifestation is acute respiratory distress with the rapid development of acute global respiratory insufficiency. It mainly affects children in the first two to three years of life. Boys are more often affected (up to 2 times more often). The highest frequency is in January to April (maximum in March). [1] [2]

The most common causative agent is RSV ( respiratory syncytial virus ). The disease most often affects infant in the first half of the year. The reason for the high incidence in infants is the fact that the antibodies or antibodies produced from the mother do not protect children against RSV during this period.

The severity of the course worsens in children with other cardiopulmonary diseases, in immunodeficient and in congenital metabolic disorders.

Initially, 'mixed dyspnoea' or an image similar to obstructive bronchitis (but does not respond to bronchodilators), pulmonary hyperinflation, and poor auditory findings predominate. Soon after, 'tachypnoea' progresses and dyspnea develops (alar deflection, retraction of intercostal spaces, grunting…). Auditarily, there are inspirational cracks in the lungs in combination with indistinct expiratory screams and whistles. The increase in respiratory work gradually reduces muscle performance, followed by hypoventilation, 'cyanosis' and 'global respiratory insufficiency' . [2] 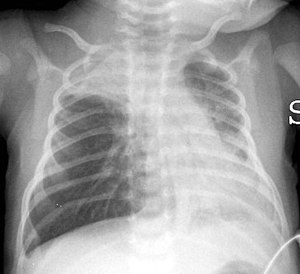 Thoracic X-ray of a 16-day-old child - marked hyperinflation of the lungs with flattening diaphragm, bilateral atelectasis in the right lung tip and in the left basal area.

Important to distinguish from obstructive bronchitis, bronchial asthma, cystic fibrosis, tracheobronchial anomalies or foreign body aspiration. [1] Sometimes severe obstructive (asthmatic) bronchitis may have a similar picture during this period, but expiratory wheezes are present, so bronchodilators and corticoids have a greater therapeutic effect.

Oxygen supply is necessary, sufficient hydration is necessary and in case of respiratory insufficiency mechanical ventilation. Furthermore, bronchodilators (β-mimetics) and corticosteroids are recommended (their administration is still controversial), as is the administration of ribavirin (antiviral). Evaluation of treatment: important assessment of gas exchange and tissue oxygenation (pulse oximetry), important examination of blood gases is important and ABR (detects hypercapnia - global respiratory insufficiency) - it is possible to prevent imminent respiratory failure. Worsening dyspnea, progressive hypoxemia, hypercapnia and apnea are indications for ICU admission and mechanical ventilation. ATB are indicated for bacterial superinfection (hemophilus, peumococcus) - in critically ill patients with high-temperature bronchiolitis and leukocytosis. [3]

Prognosis: mortality is low (2-4%). A higher incidence of wheezing and airway hyperresponsiveness is reported after bronchiolitis. [3]

It is a finding of unilateral hyperlucent lung in the absence of other pathologies of the lung parenchyma (congenital lobar emphysema, emphysematous bullae, bronchogenic cysts, bronchiectasis). The main pathogenetic event is acute bronchiolitis with obliteration of the smaller airways, which usually leads to dilation and destruction of the lung parenchyma with air - trapping and hypoperfusion of the affected segment or lobe, manifested by radiographic hyperlucency. [4]

Prophylactic administration of palivizumab (a monoclonal antibody against RSV) is recommended in selected high-risk groups of children with prematurity, heart disease or lung disease. It is given once a month for 5 months of the winter period, ie during the period of the highest frequency of RSV infections. Profit palivizumab balances its extreme price. Another form of prevention is the vaccination of all age groups against Influenza A. [4]