Monitoring of the internal environment in intensive care

Lactate is a conjugate base of lactic acid, which is formed during anaerobic glycolysis by the conversion of pyruvate by lactate dehydrogenase (LD). The level of lactate in the blood is determined by the ratio between its production and its breakdown (gluconeogenesis) in the liver. Hyperlactataemia, and later lactic acidosis, arises either from overproduction or from insufficient utilization of lactate. Lactate is involved (in descending order): skin, erythrocytes, brain, muscles, intestinal mucosa, leukocytes, platelets. Lactate is further transported by the blood to the liver, where it is used for gluconeogenesis (Cori cycle), a smaller part of lactate is used by the kidneys (for gluconeogenesis and urinary excretion), the rest is metabolized by the myocardium and other organs. The accumulation of lactate in the muscles causes a decrease of the pH, and this causes muscle fatigue and pain.

Lactate is transported by the blood to the liver, where it is back-oxidized to pyruvate. Pyruvate is converted back to glucose in the liver with energy consumption.

The acute phase reaction is a physiological process that manifests itself in the systemic release of inflammatory mediators, due to the development of pathological processes (inflammation, trauma, surgery, myocardial infarction, childbirth, tumor processes, stress, excessive physical activity).

Mediators serve to ensure the overall response of the organism, communication and regulation of ongoing events. It also forms general symptoms (fever, fatigue, malaise, muscle and joint pain). Substances, whose synthesis arises as a result of known pathology or when their concentration corresponds to the degree of tissue damage, are of clinical importance. We call such substances markers (by determining them we can confirm or exclude the diagnosis of another disease.

The set of acute phase proteins is quite diverse. Nevertheless, depending on the effect, most of them can be classified into one of the following groups:

Components of the immune response

Some acute phase reactants are directly involved in the elimination of noxious substances, which has caused inflammation. Other proteins have a role in removing damaged cells or modulating the immune response. This includes e.g.

During the acute phase, substances are mainly released from phagocytes and disintegrating cells to destroy the noxious substance, that caused the inflammation and to "dissolve" the damaged tissue. They are mainly proteolytic enzymes and reactive oxygen species. The effect of these substances should be limited, so that they act only where they have - i.e. so that the collateral tissue damage is as small as possible. Therefore, we find among the reactants of the acute phase.

Proteins that reduce the production and availability of reactive oxygen species

These are not only scavengers of reactive oxygen species in the true sense of the word, but also proteins that bind and stabilize transition metals and their complexes. This reduces the formation of ROS in the Fenton reaction and similar processes. These include:

In addition to the hemoglobin and hemopexins mentioned above, this probably includes serum amyloid A (SAA)

The significance of some acute phase positive reactants remains unknown, although they may be clinically important proteins (used as inflammatory parameters). For example, procalcitonin (PCT).

Early acute phase proteins are proteins with a very short biological half-life. Changes in their plasma concentrations are evident as early as 6-10 hours after the onset of the disease. The rise usually peaks during the second and third days. The main representatives are mainly C-reactive protein (CRP) and serum amyloid A (SAA). More recently, procalcitonin (PCT) is used in clinical practice. 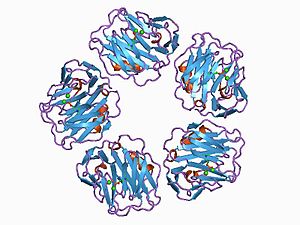 C-reactive protein (CRP) is one of the most important acute phase reactants. It is a protein that plays the role of opsonin. It got its name due to the fact that it precipitates with the so-called C-polysaccharide of pneumococci.

The plasma concentration of CRP increases already 4 hours after the induction of the acute phase reaction and during the first two days its concentration increases more than 100 times. The maximum concentration is reached in 24-48 hours, the half-life of CRP is approximately 24 hours.

Physiological plasma concentration is up to 8 mg/l. The rapid and high rise in CRP (typically to values above 60 mg/l) is accompanied mainly by acute bacterial infections, less usually also fungal infections. Viral infections, on the other hand, are characterized by a relatively small increase in CRP (usually below 40 mg/l). Therefore, determining the plasma concentration of CRP helps to decide whether to start antibiotic treatment. Successful antibiotic therapy results in a rapid decrease in CRP, while an increase persists with unsuccessful treatment.

By determining CRP, the risk of postoperative infection can be detected. On the third day after the operation, its concentration should drop rapidly to normal. A persistent increase or only a partial decrease, followed by a further increase, indicates the presence of infection or other inflammatory complications.

A slight increase in CRP is also accompanied by myocardial infarction. In general, mildly elevated CRP levels (usually around 10 mg/l) are among the signs of high cardiovascular risk. Monitoring CRP levels is also useful in monitoring autoimmune diseases.

The disadvantage of CRP is its low specificity. Unlike procalcitonin, it does not indicate the severity of the organ disorder, but only the presence of the infection. These two markers do not replace each other, but complement each other.

In recent years, procalcitonin (PCT) has been used as an acute phase reactant in research and clinical practice. This 116 amino acid protein, with a molecular weight of 13,000, is physiologically produced by thyroid C-cells as a precursor of the hormone calcitonin. However, especially in generalized bacterial infections, other cells, mainly neuroendocrine cells of the lung and intestine, but also cells of parenchymal organs and in sepsis practically all tissues and cell types begin to produce it. The concentration of this protein in the plasma then rises sharply. PCT released during sepsis is not converted to calcitonin. The exact physiological significance of procalcitonin is far from clear; it is thought to be involved in the regulation of inflammation and to have analgesic effects. The half-life of procalcitonin is 1 day, and after immune stimulation, its serum concentration increases about twenty-fold within 2-3 hours. The increase can be observed only in generalized bacterial, fungal and protozoal infections, it does not occur in viral infections. Less significant increases can be found in polytraumas, burns and after extensive abdominal operations.

Acute phase proteins with a medium response time are proteins whose concentrations change 12–36 hours after the onset of the disease and the maximum is reached at the end of the first week. These include α1-acid glycoprotein (orosomucoid), α1-antitrypsin, haptoglobin and fibrinogen.

Late acute phase proteins are represented by complement components C3 and C4 and ceruloplasmin, which do not develop changes until 48-72 hours after the onset of the disease. The increase in concentrations is less pronounced in comparison with the two previous groups of proteins and peaks only after 6-7 days.

Acute phase negative reactants are proteins whose levels decrease during acute exercise. The main representatives are albumin, prealbumin and transferrin. They are less important than positive reactants for monitoring and evaluating the course of the load response. However, they are often used as a criterion for protein synthesis in the liver and as indicators of malnutrition.