Urea is the most quantitatively important degradation product of amino acids and proteins. It is formed in the liver from ammonia released by deamination reactions in amino acid metabolism. It diffuses well through cell membranes, so its concentration is the same in both plasma and intracellular fluid.

It is excreted from the body mainly by the kidneys, namely by glomerular filtration and tubular resorption, which is variable. It is lower with increased diuresis and increases with reduced diuresis. 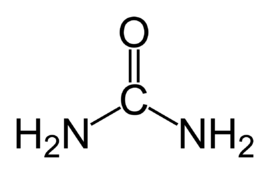 Serum urea levels may increase with increased protein intake. 5.74 mmol (0.34 g) of urea are formed from 1 g of protein. Increased urea concentration without changing other low molecular weight nitrogenous substances (especially creatinine) is a sign of intense protein catabolism, which increases during starvation, febrile conditions, malignancy. Protein catabolism is reduced in children, so their urea levels are significantly lower. Serum urea concentration increases in kidney disease, which is accompanied by a significant reduction in glomerular filtration (below 30%), while in such cases the creatinine concentration is also increased. The urea test is not suitable for detecting incipient glomerular filtration disorders. However, it is important in patients on regular dialysis treatment.

Based on the urea concentration in serum and urine, a nitrogen balance can be calculated.