Myocarditis is a disease characterized by an inflammatory infiltrate of the heart muscle with necrosis or degeneration of adjacent myocytes. They form a very clinically variable group, from the most severe forms of severe heart failure or sudden death, to a mild or asymptomatic course of the disease. Inflammatory heart diseases rarely affect the pericardium pericardium , myocardium or endocardium itself, , more often the inflammation affects the whole heart, ie we speak of pancarditis. 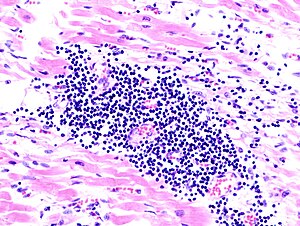 Viral myocarditis is now considered a three-phase disease: the viral infection phase, the autoimmune phase and, in genetically predisposed individuals, the phase with transition to dilated cardiomyopathy. These 3 phases can flow smoothly into each other with a difficult to distinguish transition. However, each phase differs in pathogenesis, diagnosis and, to some extent, therapeutic approach.

Viruses enter the body through the gastrointestinal (enteroviruses) or respiratory tract (adenoviruses). The critical phase of viral infection is the entry of the viral genome into myocytes. This is made possible mainly by binding to the immunoglobulin receptor on the surface of myocytes (CAR = coxsackie-adenovirus receptor). The virus proliferates and subsequently the immune system.is activated . Virus titers gradually fall and antibodies levels rise . However, the activation of the immune system can continue despite the elimination of the virus.

Fragments of viral proteins on the surface of myocytes are bound to newly synthesized HLA class I molecules. Monocytes release cytokines (IL-1, IL-6, IL-12 a TNF-alfa), which, among other things, activate T cells and stimulate B - Lymphocytes proliferation and differentiation and antibody production. The formation of an antigen-antibody complex activates the complement system. IL-2 activates cytotoxic T cells, which preferentially destroy myocardial cells with viral protein fragments. Naturally cytotoxic NK cells are activated by interferon and specifically destroy only virus-infected myocytes. Both T-lymphocytes and NK cells thus reduce the number of contractile cells.

Cytokines activate enzymes such as gelatinase, collagenase or elastase, at the same time support fibroblast activity and lead to fibrosis associated with dilated cardiomyopathy.

Myolysis of the heart muscle in the acute phases of the disease is confirmed by evidence of increased levels of the cardiac isoenzyme creatine kinase MB = = CK-MB mass and troponin. LDH and transaminase levels are also elevated .

Finding a viral agent is usually difficult. Possibility is a serological examination or analysis of material from endomyocardial biopsy by PCR (variant rt-PCR to detect enteroviruses).

Immunological examination evaluates the signs of activation of the organism's cellular response or subpopulation of T-lymphocytes. We assess the humoral immune response by determining the total levels of IgG, IgA and IgM and examining specific autoantibodies, such as anti-alpha-myosin. These autoantibodies usually occur secondarily.

Myocarditis is characterized by low ECG waveform voltage in all leads and flattening or inversion of T waves. In the left precordium, there is a noticeably small to faded Q oscillation. Sometimes depressions of the ST sections and expansion of the QRS complex are evident. Characteristic of myocarditis are heart rhythm disorders = satrial or ventricular extrasystoles, ventricular tachycardia, AV block (grade III AV block has been described in borreliosis, rubella, coxsackie and RS viruses). The ECG changes during the disease and therefore its dynamics must be monitored. Template:The changing ECG curve over time is typical of acute myocarditis!

Cardiac biopsy is not routinely used to determine myocarditis . The reason is the risk of the procedure and the relatively low yield of the examination. Cardiac biopsy is indicated in patients with subacute or chronic disease to distinguish it from dilated cardiomyopathy before deciding to initiate immunosuppressive therapy.

The so-called endomyocardial biopsy is performed, for which the so-called Dallas criteria are developed, which represent a uniform histological grading. According to histology, active myocarditis is defined by the presence of inflammatory infiltrate and necrosis. Immunocytochemical methods using monoclonal antibodies have recently been used to detect various types of lymphocytes in the myocardium.

X-rays show non-specific cardiomegaly, at the beginning there may be a normal finding. We can also use myocardial scintigraphy using the radioisotope gallium.

Various causes of circulatory failure can mimic acute myocarditis. Newborn heart failure can cause hypoxia, hypoglycemia, metabolic defects and severe sepsis. Myocarditis may be associated with febris rheumatica, systemic connective tissue diseases and other autoimmune diseases. Anomalous distance of the left coronary artery from the lungs is usually associated with severe circulatory failure in myocardial ischemia. Patients with endocardial fibroelastosis, Pompe disease or medionecrosis of the coronary arteries may also have symptoms similar to acute myocarditis. Many other congenital heart defects, such as aortic coarctation nebo aortic stenosis, are manifested by severe heart failure. Echocardiography reliably determines the diagnosis.

The therapy is mostly symptomatic, its extent and intensity depend on the severity of the patient's condition and the complications accompanying the disease.

The goal of acute heart failure treatment is to maintain adequate cardiac output, ie sufficient tissue perfusion. In acute conditions with significant left ventricular dysfunction, we choose inotropic treatment, usually dopamine nor a combination of dopamine + dobutamine. Vasodilatory therapy is important, which reduces the work of the left ventricle.ECMO is indicated for severe heart failure that does not respond to conventional resuscitation therapy.

In the treatment of chronic heart failure in children is still the drug of choic digoxin. ZTherefore, offensive digitization is inappropriate. Treatment for heart failure includes ACE inhibitors (captopril 0.1 to 1 mg / kg for up to 8 hours) and diuretics. Captopril reduces afterload and at the same time serves as a scavenger of free oxygen radicals and thus reduces the extent of myocardial necrosis. In the chronic phases of the disease after the transition to dilated cardiomyopathy, gradually increasing doses of β-blockers (carvediol) have been used recently.

Heart rhythm disorders are a serious complication of prognosis myocarditis and must therefore be treated intensively. Amiodarone except antiarrhythmic effects of inhibiting production of TNF-α and IL-6.

Antiviral therapy for viral myocarditis (ribavirin) in acute viremia reduces viral replication in the myocardium and reduces myocardial damage. Treatment with interferon γ in patients with myocarditis and a proven adenoviral or enterovirus etiology results in improved left ventricular function. However, its effect is limiting in this treatment only in the early phase of the disease, later administration is no longer important. Some authors even warn against interferon, as it can support the body's autoimmune response. In the acute phase of the disease, a beneficial effect on the improvement of left ventricular function was observed after administration of high dose gamma globulins. Gamma globulin is administered at 2 g / kg by infusion over 24 hours.

The effect of immunosuppressive therapy is ambiguous. Treatment was found to have a positive effect in patients with evidence of circulating cardiac autoantibodies and in the absence of the viral genome in the myocardium. Immunosuppressive therapy (prednisone, azathioprine, cyclosporin A) is usually initiated in the subacute or chronic phase of the disease and should be reserved for the autoimmune phase of myocarditis. Administration of immunosuppression in the early stages of a viral infection may worsen the course of the disease.