Myocarditis is a process characterized by inflammatory myocardial infiltration with necrosis or myocyte degeneration, inflammatory changes in the interstitium and vascular structures of the myocardium. The pericardium (perimyocarditis) is also often affected[1]. Myocarditis must be considered a serious disease, unfortunately there is often a misdiagnosis in children with non-specific ECG or X-ray findings.

Myocardial damage occurs either by direct invasion of the infectious agent (viral replication), by the action of a toxin (diphtheria kardiotoxin…) or by an immune response against viral antigens[1]. 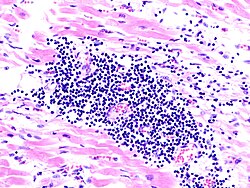 From an asymptomatic course to a fatal uncontrollable heart failure.[1] Severity increases with the age of the child.

Myocarditis in infants
It is usually severe, the child is in a serious condition, suffocating, cyanotic, there is usually fever, gray skin discoloration, cardiac failure, muffled echoes, murmur from mitral insufficiency, even cardiogenic shock.

Myocarditis in older children
The symptoms tend to be milder. In some cases, the first symptom may be an arrhythmia (a typical AV block is needed for rheumatic fever), but in about a third of patients a sudden onset of pulmonary edema or shock. Tachypnoea, increased fatigue and arrhythmias usually occur.

We emphasize the correct diagnosis. Follow - up measures can have significant consequences for the child (spa therapy, restriction of sports activities, etc.)

Laboratory finding
Increase in inflammatory markers (may not be in viral myocarditis), CK-MB and troponins, ALT, AST. We also do diagnostic virological and ASLO.

Imaging methods
ECG normal, but non-specific changes (low voltage, arrhythmias) may be present, typically changing over the course of days. The X-ray of the heart is usually normal, the heart shadow may be dilated [1]. At ECHO we see dilatation, decreased left ventricular function and significantly reduced ejection fraction[1]. As another imaging method, we can use isotope examination ((gallium isotope is captured in inflammatory deposits of the myocardium[1]). Myocardial biopsy is rarely used.

In the case of heart failure, about a third of patients die, a third become chronic and a third recover. Progression to dilated KMP is common, immunologically conditioned (mainly from chronic active myocarditis). Chronic persistent myocarditis does not lead to failure, but to problems (chest pain, palpitations).

Subsequently, the treatment focuses on the symptoms of heart failure.

Digoxin is used during the first day 0.04 mg / kg / day in 3 doses (1 / 2-1 / 4-1 / 4) and then 0.01 mg / kg / day in 2 doses. It is not age-restricted and can be given to newborns after birth. It slows down the frequency of the myocardium and improves diastole. Symptoms of intoxication include vomiting, bradycardia and progressive AV block on the ECG. In case of intoxication we use an antidote (Ig against digoxin - antidigitalis globulin).

Immunosuppressants
Application of immunoglobulins in high doses It is necessary to avoid the acute phase, during which we could increase the extent of necrosis. In the acute phase of viral myocarditis, we can use antiviral drugs (ribavirin) or interferon therapy. We also administer analgesics (eg paracetamol), either after or in an infusion.