Mechanism of action diuretics are associated with membrane transport. Diuretics may affect this transport in different parts of the nephron. They can also inhibit some transporters outside the kidneys. Their effect in the kidneys is most pronounced due to the highest concentration of these transporters.

Diuretics acting in the proximal tubule

This group of diuretics includes carbonic anhydrase inhibitors, which inhibit bicarbonate reabsorption in the proximal tubule with subsequent bicarbonate diuresis. Significant bicarbonate losses can lead to metabolic acidosis. However, the effect gradually decreases over several days. The cause is increased NaCl reabsorption, which leads to acidosis. 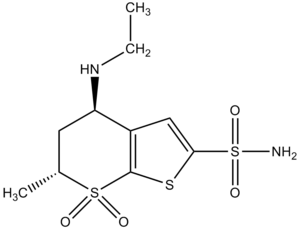 The two main representatives are:

The main indication is glaucoma therapy. The ciliary body secretes bicarbonate into the intraocular fluid by a mechanism similar to tubular reabsorption, but in the opposite direction. It can also be blocked by carbonic anhydrase inhibitors, leading to a decrease in the amount of intraocular fluid. Dorzolamide is given as eye drops. Another indication is the correction of metabolic alkalosis and prophylaxis and treatment of altitude sickness. 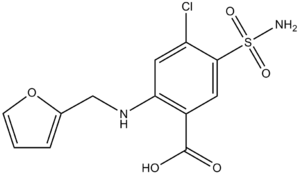 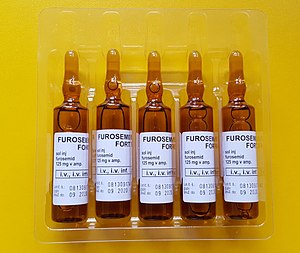 Loop diuretics act by blocking Na + transport in the ascending part of Henle's loop. This disrupts the osmotic stratification of the kidney and significantly increases diuresis. Compensatory mechanisms in the distal tubule and collecting duct lead to the exchange of Na + for K +, which can lead to severe hypokalaemia. It is therefore necessary to monitor the level of potassium, or increase its intake by infusion of KCl, or combine loop diuretics with potassium-sparing. With K + ions, Cl− ions are also lost, which can cause hypokalemic, hypochloremic metabolic alkalosis. At the same time, tubular resorption of Ca2 + and Mg2 + also decreases.

Furosemide is one of the most commonly used.

Diuretics acting in the distal tubule

Here we rank mainly thiazide diuretics (thiazides), for which we distinguish: 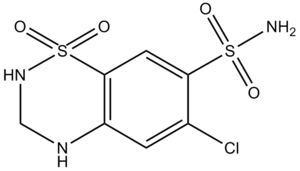 The main representatives are: 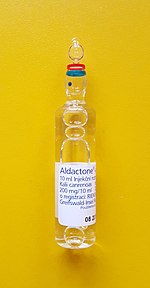 Potassium canrenoate (Aldactone®) 125 mg in an ampoule for i.v. application

Potassium-sparing diuretics act as aldosterone antagonists in the collecting duct and lower distal tubule. It can be a direct antagonism - for example, spironolactone acts as a blocker of the mineralocorticoid receptor. In contrast, for example, amiloride inhibits Na + transport by ion channels in the luminal membrane, thus reducing sodium resorption. This also reduces the loss of potassium into the urine, as the resorption of Na + from the collecting ducts creates a negative electrical potential in their lumen, which facilitates the secretion of K + and H + into the urine.

The main representatives include:

[edit part] Osmotic diuretics are drugs that increase the excretion of water (diuresis). The proximal tubule and the descending limb of the loop of Henle are freely permeable to water. In these segments, the osmotically active osmotic diuretics, which are not reabsorbed, lead to water retention in the nephron. As a result, these substances lead to osmotic diuresis.

The main example of an osmotic diuretic is mannitol, which is administered as a 10-20% solution.

Mannitol is not metabolized and undergoes glomerular filtration (within 30-60 min after administration) without significant tubular secretion or reabsorption. Since mannitol is poorly absorbed in the GIT, per os administration is avoided. If performed, it would cause severe diarrhea. Hence, mannitol is usually administered intravenously. Due to osmotic diuretic administration, accelerated tubular fluid flow (and hence less tubular epithelium contact) leads to decreased Na+ resorption, resulting in increased natriuresis. The natriuresis is minor in comparison to the osmotic diuresis, so hypernatremia may occur.

Osmotic diuretics are used when increased water excretion with minimal Na+ excretion is required. For example, it can be indicated to treat conditions associated with impaired renal hemodynamics or to maintain urine volume and prevent anuria, which may occur during hemolysis. Osmotic diuretics can also be prescribed to decrease intracranial or intraocular pressure as they reduce the rate of aqueous humor production. Finally, mannitol can be used along with loop diuretics to induce forced diuresis in intoxication (to decrease the plasma concentration of the toxin).

Osmotic diuretics should be avoided in patients with anuria (since no urine is produced, diuretics will not reach their typical site of action, but they will only affect other organs) or heart failure.

Aquaretics are receptor blockers for ADH.