Heart (cor) is a muscle organ with four chambers that acts as a continuously operating pump. It drives the blood through the blood vessels to all parts of the body and thus allows nutrition and metabolism in the tissues

The heart is placed behind the sternum in the mediastinum, two thirds to the left of the midline and one third to the right. The weight of the heart averages around 300–350 g in men, and in women it weighs around 250–300 g. [1] An increase in the heart's weight above 400 g in men and above 350 g in women is called hypertrophy.[1] The heart can hypertrophy in various pathological conditions or also in athletes. The whole muscle organ is enclosed in a envelope called the pericardium with a serous cavity.

General anatomy of the heart

The heart muscle has the shape of an irregular cone and it is oriented ventrolaterally to the left with its tip (the longitudinal axis of the heart points from the mouth of the superior vena cava from top to right from back to front to left). The tip of the cone is projected into the 5th intercostal space near the medioclavicular line. The position of the tip changes with age and respiratory activity (approximately one intercostal space). In children it is moved one intercostal space higher and laterally, in older people it is located in the 6th intercostal space.

The projection of the heart is presented by four main points:

At heart we can describe:

The atria and ventricles are macroscopically separated from each other by:

From a histological point of view, the heart wall is made up of 3 layers, they are the endocardium, myocardium and epicardium.

Endocardium (inner layer; tunica intima) lines the heart cavity, is in contact with the flowing blood, smoothly changes into the tunic of the vascular intima, forms the heart valves. It consists of 4 layers: 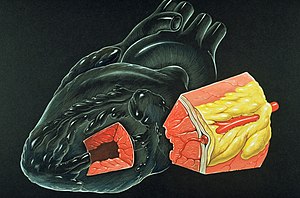 The myocardium (tunica media) is cardiac muscle that ensures regular heart contractions . It is the thickest part of the heart wall, which it forms together with the endocardium and epicardium . The strongest myocardium is found in the left ventricle, where the blood pressure is the highest, and where oxygenated blood is ejected into the systemic circulation.

The basic building block of the heart muscle is the cardiomyocyte. These are Y-shaped muscle cells. The cell nuclei are located in the center of the cell and they are elongated. The cell nucleus may contain one to two nucleoli

It is innervated by the autonomic nervous system, which controls the frequency of contractions. The contractions arise spontaneously in the cardiac conduction system (cardiac automation).

The myocardium is nourished by coronary arteries that arise directly from the aorta. If it is not adequately supplied with nutrients, complications occur in the form of diseases, especially myocardial infarction and coronary heart disease.

Epicardium (outer layer of the heart wall; tunica serosa) is the mesothelial lining forming the visceral leaf pericardium. It is furthest from the heart cavity, communicating with about 50 ml of pericardial fluid. Coronary arteries takes place in the subepicardium.

The vena cava superior opens into the right atrium at the back from above, in ostium venae cavae superioris. Vena cava inferior comes from below in ostium venae cavae inferioris . The point of entry of both hollow veins is called "sinus venarum cavarum". The Sulcus terminalis is a shallow depression to the right of the mouth of both veins, separating them from the rest of the vestibule. On the hollow side, it corresponds to the "crista terminalis", which is supported by a strip of muscle.

The blood flowing from the inferior vena cava to the heart is directed by the walls into the valvula venae cavae inferioris, analogously the blood from vena cava superior is directed in the other way by the tuberculum intervenosum.

The right atrium is the area in front of the sinus venarum cavarum and contains several formations:

The medial wall is formed by the septum interatriale, with a noticeable fossa ovalis. During the embryonic development, it served as a transitional link between the two atria. The septum has fibrous, thinned part without muscle - pars membranacea septi. 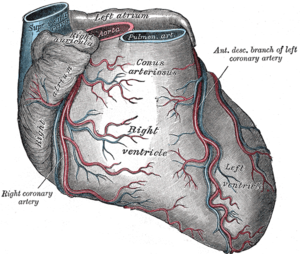 Heart from the right side

The inflow part begins in the ostium atrioventriculare dextrum with a triple valve (valva atrioventricularis dextra; valva tricuspidalis). We distinguish three tips on it - cuspides anterior, posterior et septalis . Against the tips musculi papillares are stretched, and with their pull that they generate through the chordae tendinae, they prevent the valve from tipping into the atrium. In the right ventricle, the most significant are m. papillaris anterior et posterior, and in variable quantities are also mm. papillares septales.

No trabeculae are present in this part, so the smooth part is called pars glabra. We distinguish the following parts:

Heart from the right side

In the left atrium, we distinguish the following units:

The left ventricle is round with a thicker muscle wall in cross section (approximately three times the mass of the muscle compared to the right ventricle).

The Inflow part is larger than the right ventricle, from the ostium atrioventriculare sinistrum forward down to the apex and to the anterior wall of the ventricle. We distinguish in it:

The Outflow part is shorter than in the right heart a it is located more ventromedially from ostium atrioventriculare sinistrum, it points caudally. We distinguish in it:

The heart is supplied by two main coronary arteries, extending as the first branches of the aorta. The venous return is provided by the veins merging into the trunk sinus coronarius, leading to the right atrium of the heart.

View of the cardiac skeleton and heart valves

Cardiac skeleton it is made of dense fibrous ligaments which is attached to the myocardium together with all the heart valves. The skeleton electrically separates the myocardium of the atria from the myocardium of ventricles (the only link between the atrial myocardium and the ventricular myocardium is the so-called Bundle of His passing through the trigonum fibrosum dextrum). It consist of several parts:

Heart valves are valves that ensure one-sided flow of blood in the heart. They are not innervated and they are avascular (they open and close based on a pressure gradient). From a histological point of view, these are endocardial duplications. They are formed by an internal fibrous plate (collagen and elastic fibers), on the surface they are covered by endothelium. They are connected to the fibrous rings of the heart skeleton. In the heart we find 4 heart valves, they are: 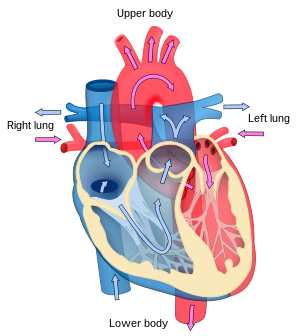 Blood flows from superior and inferior cava to the right atrium. Blood flows through the atrium to the tricuspid valve, through which it enters the right ventricle. In the wall of the right atrium is the first part of the heart conduction system, which creates excitement for regular heart contractions. Specifically, the SA and AV node.

Blood flows from the right atrium through tricuspid valve. In the ventricle, it first flows through the inflow part (trabeculae carnae) and after it continues to the outflow part (conus arteriosus). Through pulmonary valve it flows to pulmonary artery and its branches to the lungs, in which the exchange of blood gases takes place. The right ventricle pumps blood at low pressure (approximately 20 mmHg).

Blood flows from the left atrium through mitral valve. In the let ventricle it first flows through the inflow part (again composed of trabeculae carnae) and then it passes into the outflow part (represented by vestibulum aortae). Through the aortic valve it flows into the aorta ascendens and its branches into the whole body. The left ventricle pumps blood under high pressure within the systemic circulation (at about 120 mmHg).

Lymphatic vessels of the heart

The lymph vessels of the heart begin with three networks: