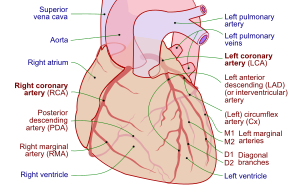 Coronary circulation supply oxygen and nutrients to the heart (especially the myocardium). It consist of two coronary arteries (right and left) that supply blood to the heart tissue and coronary veins that lead it away. The supply from the right coronary artery predominates in almost half of the people (45 %). Both arteries are involved in the supply of the heart in the same way in 35% of people and only 20 % of people have a more dominant left coronary artery.

Because the coronary arteries do not form anastomoses, this part cannot be bypassed when arterial obstruction occurs. Therefore the tissue behind the artery is subject to ischemia → myocardial infarction. At the level of arterioles, anastomoses exist. If the coronary artery occlusion process is slow, collateral may form and ischemia does not occur.

The venous blood runs mainly through (to the right atrium) the sinus coronarius, into which the vena cordis magna, vena cordis media and vena cordis parva flow. At the heart is a rich capillary network.

Collateral circulation - collaterals are underdeveloped in the heart, but in the case of impaired flow, they can develop a relatively large collateral bed.

Blood flow through the coronary arteries at rest is about 250 ml/min (5 % CO), at maximum physical activity up to 1,250 ml/min (it means this number can increase up to 5 times). Oxygen consumption in the heart is 30 ml/min (8-12% of total consumption). Cardiac cells take oxygen from the blood more efficiently than cells from other tissues.

Blood flow is in phases. Especially in the left ventricle, high systolic pressure (lower in the right ventricle) closes the blood vessels. The major proportion of coronary blood flow is in diastole, so the length of diastole limits total flow. This has a negative effect at high heart rates, which shortens the diastole. This decrease is compensated by the vasodilatory effect of increased metabolites production by the more intensively working myocardium. On the other hand, myocardial contractions help the outflow of venous blood from the coronary artery.

With increasing myocardial work, metabolic turnover and the amount of catabolites (lactate, H +) increase, which then have a significant vasodilatory effect. The most important vasodilator in coronary circulation is adenosine. Adenosine accumulates as an AMP degradation product that is not sufficiently regenerated to ATP in the absence of oxygen. Vasodilation is induced via the A2 receptor. Another vasodilating metabolic factor is O2 deficiency. The sympathetic nervous system indirectly causes vasodilation in the coronary artery too. By releasing adrenaline or noradrenaline (these catecholamines act on β2-adrenoreceptors), which increase the metabolic turnover of the myocardium. Thyroid hormones, drugs (digitalis), etc. also act.

The heart muscle does the work by contraction of its fibers. Work (in this case) means the displacement of a certain volume of blood against a certain resistance (can be expressed by the pressure necessary to overcome it) - pressure-volume work. The heart gives the blood a certain kinetic energy - acceleration work. The individual quantities from which the mechanical work of the heart is calculated change during the heart action (the integral is calculated for the calculation).

The immediate source of energy for the myocardium is ATP, which is hydrolyzed by ATPase stored in the myosin head. The myocardium obtains energy for ATP resynthesis exclusively aerobically. Oxygen consumption in the heart at rest is 0.08 - 0.1 ml O2 per gram of tissue per minute, about 24-30 ml/min - about 10% of total O2 consumption. During hard work, consumption increases about fivefold. Oxygen consumption is determined by the work of isovolumic contraction, contraction force and heart rate. The heart's work during the relaxation and ejection phases, myocardial activation and its basal metabolism has a smaller effect. Isovolumic contraction is more involved in oxygen consumption than isotonic contraction in the ejection phase of systole (mechanical work). Nutrient consumption by heart - high proportion of free FA, ability to metabolize lactic acid. In addition to ATP, the myocardium also contains creatine phosphate - a sensitive indicator of a sufficient supply of nutrients and oxygen to the heart. Creatine phosphate is an immediate source of energy for ATP resynthesis.