Diphtheria (croup) is a severe infectious disease, which is caused by the action of toxins coryneform microbes. According to the clinical picture, we recognize five forms. At present, it is rare in our country, mostly an imported disease.[1] 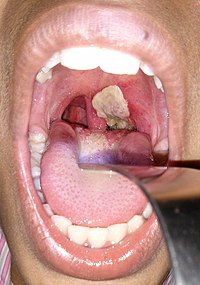 The etiological agens is the bacterium Corynebacterium diphtheriae (or C. ulcerans) − gram-possitive, immobile, non-sporulating rod. According to the morphology, appearance of colonies and biochemical properties, we distinguish three biotypes: gravis, intermedium a mitis.

Diphtheria affects only humans. The source is sick people or bacilus carriers. The infection is spread by droplet transmission, or indirect transmission - contact with contaminated objects. Injured skin or vagina can also become the gateway to the infection.[2]

In the Czech Republic, the incidence of diphtheria was significantly reduced by the introduction of compulsory vaccination (1946). Today it appears only rarely and is mostly imported. There is a risk of small-scale epidemics in communities with poor hygiene and habits, so it is desirable to monitor the occurrence and maintain good population immunity..[3]

C. diphteriae is not primarily invasive. After the incubation period (2−4 days)[4] the bacteria at the site of infection begin to multiply and produce diphtheric toxin (the ability of the strain to produce exotoxins is a condition for the development of the disease). The toxin spreads to the surrounding area, causes cell necrosis by blocking proteosynthesis and the formation of pseudomembranes (pseudomembranes) composed of dead cells, fibrin and leukocytes. It is also absorbed into the bloodstream, creating toxaemia and life-threatening complications.

This form is the most common clinical finding. It starts with fever, weakness and sore throat. The mucous membranes are swollen, the tonsils are reddish and later white-yellow pseudomembranes appear on them, cling firmly to the base and cannot be removed without damaging the tissue. The membranes can spread further into the airways and, together with swelling, cause suffocation. At this stage, the administration of antibiotics is sufficiently effective.

If the patient is not treated, the toxin enters the bloodstream and damages mainly the myocardial cells, the renal tubular epithelium and peripheral nerve fibers. The fever increases, the pseudomembranes are gray, and at a more advanced stage, there are green-black necrotic spots. It spreads to the surroundings through a soft palate and the palate arches to the larynx.[3][1] There is a paralysis of the soft palate – the patient has a ,,raucous“ voice while drinking the fluid leaks through his nose. Typical is a sweet breath and collum proconsulare (collum Caesari) – pronounced lymphadenopathy of the neck.

It is manifested by stridor and a barking cough. Pseudomembranes spread to the lower respiratory tract and the disease progresses rapidly.

It is characterized by pseudomembranes on the nasal mucosa and secretions from the nose. It is highly infectious.

We find painless ulceracerations that are covered in gray pseudomembranes and heal poorly. It occurs practically only in developing countries.[1]

Myocardial involvement sometimes occurs with a delay, in the recovery stage. It has various manifestations - such as arrhythmias, congestion, blockade of Tawar's arm, etc. Among the early neurological complications appearing in the acute stage, we include the already mentioned soft palate paresis Late neurological complications manifest as paralysis, which occurs 3 weeks to 3 months after the onset of the disease. They are symmetrical and include polyneuritis, another paralysis of the soft palate or, for example, paralysis of the oculomotor muscles. Tubular necrosis also often occurs in the acute stage.[1]

Suspension is based on characteristic clinical signs. The evidence is based on the cultivation of corynebacteria in a tonsil or laryngeal swab, which requires specific soil. It includes verification of toxigenicity by immunoprecipitation in agar with antitoxin (so-called Elek test).

Antidiphteric immunoglobulin (antitoxic antibody) is already given when diphtheria is suspected, so no culture card is expected. In the early stages, the patient can be treated with antibiotics, penicillin is suitable. In severe forms, crystalline penicillin is administered in doses of 2 to 5 million IU intravenously at 4-hour intervals. Lincosamides or ciprofloxacin are also effective. Support of vital functions is also important; corticosteroides are indicated for airway obstruction to reduce swelling or in case of tracheostomy.[1]

Prevention is based on vaccination with Al2O3-bound toxoid given in triple combination (with tetanus and pertussis) in childhood. The level of immunity can be verified by the Schick test (i.d. application of a very small dose of diphtheria toxin on the forearm) - local erythema develops in non-immune individuals. To differentiate the allergic reaction, a small amount of toxoid is applied to another site. It is advisable to apply a booster when entering the risk area.[2]