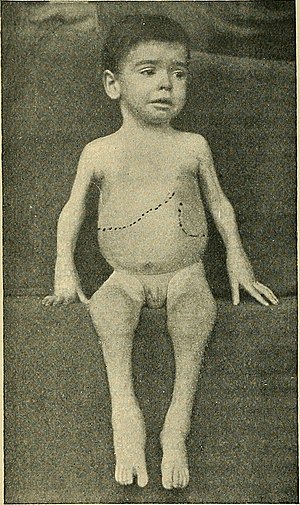 Juvenile idiopathic arthritis or juvenile rheumatoid arthritis is the most common systemic disease in children age. This disease begins before the 16th year of age and must last more than 6 weeks. The classifications of pediatric arthritis are different. The most recent is the so-called ILAR classification → JIA. Others are: systemic, oligoarthritis, polyarthritis, psoriatic arthritis, arthritis with enthesitis and other arthritis. Most often, the knees and other large bonds.

This is a common disease, which incidence is 2-20/100,000. Girls tend to be affected 2–3 times more often than boys. Juvenile idiopathic arthritis has its two peaks – up to 3 years of age and in puberty.

The disease is quite unknown, probably multifactorial. There are 2 main theories. Either it is an autoimmune disease, which is characterized by abnormal T-lymphocytes synovialitis.It is explained by immunogenetic influences that affect antigenic presentation (APC) a T-bb, thereby changing the course of the disease. The second option is the so-called genetic predisposition, where part of the short shoulder strap 6th chromosome, where HLA system is located, has a controlling role.

Other factors are stress, hormonal dysbalance, infection (mycoplasma, EBV) or disregulation of ANS.

There is sedation and hypertrophy of the synovial lining → pannus (granulation tissue formed by fibroblasts, blood vessels, round cell infiltration). Blood vessels are clogged with inflammatory cells and perivascular infiltrates are formed in them. Virgo grows from the osteocardiaginotic junction to the cartilage of the articular surfaces and destructs them. Erosion occurs only to possible defects. There is a disability of the subchondral bone with the formation of cysts ischemization on the basis of vascular impairment. Deformities of the articular ends of articulic bones are formed. The same process proceeds periarticularly and leads to the usuration of ligament and joint capsule, which causes stability of the joint.

Oligoarthritis is an inflammatory disability of low intensity in 4 or fewer joints. Extraarticular manifestations are rare (except for chronic uveitis). Mainly the lower limbs are affected, in 60% it is the knees, then the mushole, or the elbow. The affected joints tend to be swollen, warmer, minimally painful, there is a pronounced restriction of joint momentum (often morning stiffness). The prognosis is usually good.

After the first 6 months, the disease affects 5 or more joints. The image and prognosis are close to polyarthritis. However, the formation of flexion contractures and joint deformities is more common.

The beginning is mostly gradual, affecting more than 5 joints (mostly more than 8[1]) arthritis can be both remitent and persistent with a tendency to symmetrical disability mainly of large joints (knees, wrists, elbows, hocks), hip joints tend to be affected in 1/2 cases. Often there are diseases of the cervical spine and temporomandibular jointing. In small joints of the hand, it is a disease mainly of the interphalangeal joint of the thumb, 2nd and 3rd MCP of joints, proximal interphalangeal joints of all fingers. They are hot, soaked, rarely reddened. Deformities are divided into: type of buttonhole (boutonniére, PIP flexion and dip joint hyperextension), where there is flexion contraction of the fingers and type of swan neck (swan-neck, pip hyperextension + dip joint flexion).

Extraarticular impairment includes subcutaneous rheumatic nodes, hepatosplenomegaly and lymfadenopathy. Seropositive polyarthritis tends to be significantly destructive, corresponds to RA in adults, in seronegative polyarthritis we note a milder course, when it can even go into permanent remission.

Still's disease is a severe systemic disability at the beginning of JIA in 10% of children. There is fever (briefly exceeding 39 °C), tachycardia, macular exantema around the torso and upper extremities, hepatosplenomegaly, generalized lymphadenopathy and pericarditis.

Joint injuries are most often affected by large limb joints and small joints of the hand. It is important not to forget to examine ATM and the range of momentum of the cervical spine (subluxation at the atlantooccipital and atlantoaxial levels with compression of nerve structures).

Extraarticular symptoms include: abnormalities of growth and general development of the child, local growth disorders and chronic uveitis. Approximately 1/2 of patients experience calming and the next course is under the image of oligoarthritis, in 2nd 1/2 there is progression and severe joint involvement.

SEA syndrome is a myoskeletal disease with the beginning of 16 years of life, seronegativity on RF and ANA, entezitis and arthritis/arthritis are mostly found outside the axial skeleton.

Etiology and pathogenesis: the onset of symptoms occurs in late childhood and adolescence, 7 × more often boys are affected, there is a close link with the antigen HLA-B27 which is the trigger for intestinal infection. Clinical picture: Arthritis of peripheral joints appears at the initial stage – mainly in the lower extremities and entezitis – discrete swelling ,soreness, inflammatory affectation of SI joints (X-ray: diffuse osteoporosis of the surroundings, blurring of the boundary of the subchondral bone, erosion → and expansion of the joint slit → the demise of the joint slit and sacroiliac fusion), changes in the spine, calcification of thelig. longitudinale anterius, later vertebral synostosis under the image of the "bamboo rod".

This is arthritis with psoriasis. The disease is characterized by dactylitide – prst je tvaru buřtíku, tzv. „sausage digit“) the finger is the shape of a sausage digit and nail abnormalities, we observe dimming and transverse striations. The disease occurs mainly in girls of preschool age and around 10 years of age. Most often, the knee and small joints of the hand and foot (typically asymmetrically) are affected. The prognosis is worse compared to other forms of JIA.

Based on diagnostic criteria, of which there are a number of:

The disease begins to manifest itself before the 16th year. The patient suffers from arthritis of one or more joints, swelling, effusion, the presence of restriction of momentum, stiffness in movement, warmer joint. Arthritis lasts 6 weeks or more. During the first 6 months, the disease proceeds as polyarthritis, oligoarthritis or systemic form. It is important to exclude other forms of juvenile arthritis.

Arthritis lasting 3 months or more. Arthritis of the next joint is 3 months. Later, there is a symmetrical disability of small joints, effusions in the joint, contracture in the joint, tendosynovititis or bursitis, muscle hypotrophy and atrophy, stiffness in the joint, rheumatoid eye involvement and rheumatoid nodules.

If the patient has 4 of the listed manifestations with proven arthritis, we are talking about a certain JIA. If there are 8 or more criteria – classic JIA.

In outpatient practice, this can not be done, if a rheumatic disease is suspected, we send the child to a pediatric rheumatologist.

The goal of therapy is to find a drug blocking more COX-2 (inflammation) than COX-1 (stomach, kidneys, platelets). Selective COX-2 are expensive, but reduce THE (gastropathy, interstic nephritis, papillary necrosis, bleeding conditions, bronchospasm, etc.). The practitioner can indicate the treatment himself, usually doing so only after consulting a specialist. Therapy takes at least 6 weeks to evaluate the results. The most commonly used therapy is an indication of ibuprofen, KO, liver tests and urine are monitored. Diclofenac, tiaprofenic acid and indomethacin, also indicated, but indomethacin is not served for more than 3 weeks.

The second row of antirheumatics are slow-acting antirheumatics. About 2/3 of children with JIA do not respond to NSA treatment, so we usually serve this group with nsaids.

Indications of corticosteroids must be very responsible, the doctor must be aware of the possible consequences. It is administered topically (intraarticularly – an essential element of early-stage treatment), orally and parenterally. An absolute indication is a systemic form with life-threatening pericarditis and a severe form of uveitis.

Rheumatology, unlike adults, is used less frequently in children. Synectomy is the so-called exstirpation of the inflammatory lining of the joint. The procedures on soft tissues that are performed are called tenotomies and capsulotomy. Performances on the skeleton are usually operations that deal with uneate limb lengths after irritating overgrowth of long bones.

Mortality in JIA is below 1%, persistent arthritis activity occurs in 31-55% of patients, severe functional impairment in 9-30%.

Evaluation of the functional activity of the patient[edit | edit source]