Nuclei with an odd mass or odd atomic number have "nuclear spin" (in a similar fashion to the spin of electrons). This includes 1H and 13C (but not 12C). The spins of nuclei are sufficiently different that NMR experiments can be sensitive for only one particular isotope of one particular element. The NMR behaviour of 1H and 13C nuclei has been exploited by organic chemists since they provide valuable information that can be used to deduce the structure of organic compounds. These will be the focus of our attention. Since a nucleus is a charged particle in motion, it will develop a magnetic field. 1H and 13C have nuclear spins of 1/2 and so they behave in a similar fashion to a simple bar magnet. In the absence of a magnetic field, these are randomly oriented but when a field is applied they align parallel or anti-parallel to the field. The more highly populated state is the lower energy spin state, which is in alignment to the magnetic field.

A fMRI scan showing regions of activation in orange, including the primary visual cortex (V1, BA17). Functional MRI (fMRI) measures signal changes in the brain that are due to changing neural activity. The brain is scanned at low resolution but at a rapid rate (typically once every 2-3 seconds). Increases in neural activity cause changes in the MR signal via T2* changes; this mechanism is referred to as the BOLD (blood-oxygen-level dependent) effect. Increased neural activity causes an increased demand for oxygen, and the vascular system actually overcompensates for this, increasing the amount of oxygenated hemoglobin (haemoglobin) relative to deoxygenated hemoglobin.

Because deoxygenated hemoglobin attenuates the MR signal, the vascular response leads to a signal increase that is related to the neural activity. The precise nature of the relationship between neural activity and the BOLD signal is a subject of current research. The BOLD effect also allows for the generation of high resolution 3D maps of the venous vasculature within neural tissue. While BOLD signal is the most common method employed for neuroscience studies in human subjects, the flexible nature of MR imaging provides means to sensitize the signal to other aspects of the blood supply. Alternative techniques employ arterial spin labeling (ASL) or weight the MRI signal by cerebral blood flow (CBF) and cerebral blood volume (CBV). The CBV method requires injection of a class of MRI contrast agents that are now in human clinical trials.

Modern 3 Tesla clinical MRI scanner. Medical MRI most frequently relies on the relaxation properties of excited hydrogen nuclei in water and lipids. When the object to be imaged is placed in a powerful, uniform magnetic field, the spins of atomic nuclei with a resulting non-zero spin have to arrange in a particular manner with the applied magnetic field according to quantum mechanics. Nuclei of hydrogen atoms (protons) have a simple spin 1/2 and therefore align either parallel or antiparallel to the magnetic field

The spin polarization determines the basic MRI signal strength. For protons, it refers to the population difference of the two energy states that are associated with the parallel and antiparallel alignment of the proton spins in the magnetic field and governed by Boltzmann statistics. In a 1.5 T magnetic field (at room temperature) this difference refers to only about one in a million nuclei since the thermal energy far exceeds the energy difference between the parallel and antiparallel states. Yet the vast quantity of nuclei in a small volume sum to produce a detectable change in field. Most basic explanations of MRI will say that the nuclei align parallel or anti-parallel with the static magnetic field; however, because of quantum mechanical reasons, the individual nuclei are actually set off at an angle from the direction of the static magnetic field. The bulk collection of nuclei can be partitioned into a set whose sum spin are aligned parallel and a set whose sum spin are anti-parallel.

The magnetic dipole moment of the nuclei then precesses around the axial field. While the proportion is nearly equal, slightly more are oriented at the low energy angle. The frequency with which the dipole moments precess is called the Larmor frequency. The tissue is then briefly exposed to pulses of electromagnetic energy (RF pulses) in a plane perpendicular to the magnetic field, causing some of the magnetically aligned hydrogen nuclei to assume a temporary non-aligned high-energy state. Or in other words, the steady-state equilibrium established in the static magnetic field becomes perturbed and the population difference of the two energy levels is altered. The frequency of the pulses is governed by the Larmor equation to match the required energy difference between the two spin states. 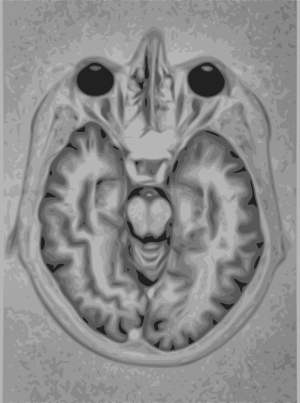 Clinical practice, MRI is used to distinguish pathologic tissue (such as a brain tumor) from normal tissue. One advantage of an MRI scan is that it is thought to be harmless to the patient. It uses strong magnetic fields and non-ionizing radiation in the radio frequency range. Compare this to CT scans and traditional X-rays which involve doses of ionizing radiation and may increase the risk of malignancy, especially in a fetus.

While CT provides good spatial resolution (the ability to distinguish two structures an arbitrarily small distance from each other as separate), MRI provides comparable resolution with far better contrast resolution (the ability to distinguish the differences between two arbitrarily similar but not identical tissues). The basis of this ability is the complex library of pulse sequences that the modern medical MRI scanner includes, each of which is optimized to provide image contrast based on the chemical sensitivity of MRI.

For example, with particular values of the echo time (TE) and the repetition time (TR), which are basic parameters of image acquisition, a sequence will take on the property of T2-weighting. On a T2-weighted scan, fat-, water- and fluid-containing tissues are bright (most modern T2 sequences are actually fast T2 sequences). Damaged tissue tends to develop edema, which makes a T2-weighted sequence sensitive for pathology, and generally able to distinguish pathologic tissue from normal tissue. With the addition of an additional radio frequency pulse and additional manipulation of the magnetic gradients, a T2-weighted sequence can be converted to a FLAIR sequence, in which free water is now dark, but edematous tissues remain bright. This sequence in particular is currently the most sensitive way to evaluate the brain for demyelinating diseases, such as multiple sclerosis.

The typical MRI examination consists of 5-20 sequences, each of which are chosen to provide a particular type of information about the subject tissues. This information is then synthesized by the interpreting physician.