Influenza virus is a RNA virus of the family Orthomyxoviridae that is responsible for the infectious disease influenza (or most commonly referred to as flu) in birds, various mammals (such as pigs) and humans. Typically, influenza is characterized by fever, sore throat, chills and other non-specific symptoms and although it can be mistaken for common cold, it is a much more severe disease. It is spread around the world in seasonal epidemics and according to World Health Organization, these annual epidemics result in about three to five million cases of severe illness, and about 250 000 to 500 000 deaths. 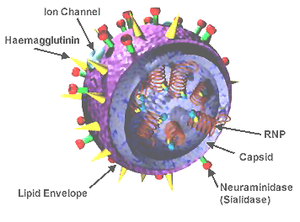 Influenza virions are 80–120 nanometers in diameter, spherical and enveloped. The lipid-containing envelope surrounds the helical nucleocapsid, which contains the viral genome and four viral proteins: NP, the major nucleocapsid proteins and three P proteins, all of which are involved in synthesis and replication of viral RNA. The viral RNA is single-stranded and of negative polarity and it first needs to be transcribed into a complementary strand.
Two major glycoproteins project from the surface of the virion: hemagglutinin (H protein) and neuraminidase (N protein) and both are integral membrane proteins. H protein facilitates the attachment of the virus and the release of viral genome into target cells, whereas N protein mediates the release of the newly synthesized virions from the infected cells. Both proteins function as antigens that trigger an immune response. Lastly, M (matrix) proteins are found beneath the viral envelope and they have multiple regulatory functions concerning viral replication, budding and assembly. 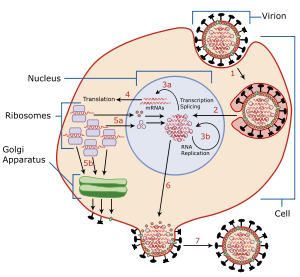 When a person is infected with influenza virus, antibodies are made against surface viral proteins, especially H protein. These surface antigens serve also for the classification of influenza viruses into types A, B and C. Only influenza virus types A and B are of medical importance and the difference between them is that type A virus has an animal reservoir. Furthermore, type A influenza virus is divided into subtypes according to viral H and N proteins. Among human influenza viruses, only three H (H1, H2 and H3) and two N (N1 and N2) subtypes are found and are designated, for example, as subtype H1N1 (the cause of swine flu in 2009)

Influenza virus is able to change H and N proteins on its surface, therefore changing its antigenic properties. This antigenic variability is the result of two processes:

This process involves minor antigenic changes in H and N proteins that occur each year and they are caused by random mutations in viral RNA and amino acid substitutions in H and N proteins. However, antigenic drift does not involve a subtype change and can occur in both type A and B influenza viruses.

This process involves a more serious change in antigenic properties of H and N proteins and therefore, a change in subtype. It involves only type A influenza viruses and it occurs more infrequently, for example every 20 years. When a cell is infected with two genetically distinct influenza viruses, parental genomes are replicated and progeny viruses contain genomic segments from both parents, a process called reassortment. When these changes occur, a new strain of virus appears and people are at high risk, since they are not immunologically protected. These conditions set the basis for the epidemic or pandemic outbreaks that happen every now and then.

Influenza is an airborne disease, therefore in humans it is spread by respiratory droplets. Since the virus can persist outside the body for some time, it can also be transmitted from hands contaminated with the virus. It affects solely the upper respiratory tract and rarely spreads to other organs. Likewise, viremia is rarely seen.

Typically, influenza has an acute onset characterized by:

Most affected people recover within a week without requiring medical attention. But influenza can cause serious illnesses (e.g. development of pneumonia) or death in people at high risk, such as children under two years old, elderly people and patients with chronic diseases or compromised immune system.

A diagnosis based solely on clinical signs and symptoms cannot be made since these symptoms can be present in numerous other infections (except in epidemic or pandemic cases). The demonstration of viral antigens in respiratory tract secretions and the quantitation of antibodies specific for H protein are two widely performed tests. The latter one, can help to identify the subtype of the virus.

Nowadays, two types of antiviral drugs are used against influenza: 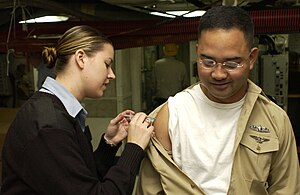 Influenza vaccine is used against seasonal influenza and is composed of three formalin-inactivated influenza viruses: two type A virus strains and one type B virus strain. The effectiveness of the vaccine varies due to the high antigenic variability of the virus. Therefore, vaccines are reformulated each year according to predictions and estimations of WHO. However, it is possible to get vaccinated but still get influenza, since the vaccine cannot include all possible strains of the virus. Unfortunately, a vaccine against influenza pandemic is not available yet but an ongoing research is still in progress.