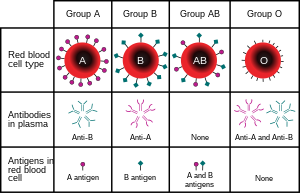 ISBT classification: 002. These include M, N, S, s and U antigens (+ over 40 other antigens). These antigens are formed by sialic acid-containing glycoproteins and are therefore referred to as sialoglycoproteins. Antigens are the product of two pairs of allelic genes (GYPA, GYPB). MNS antigens are responsible for the electronegative potential and integrity of erythrocytes, their interaction with cells,they are the receptor for cytokines, bacteria and viruses. They also belong to the group of antigens that can be destroyed by the enzyme (eg papain, bromelain, ficin, etc.).

ISBT classification: 003;
The system name P1Pk is more accurate.k. Since 2012, three antigens have been included in this system: P1, Pk a P1PK4.
The antigens are structurally similar to the antigens of the AB0 system, where they depend on the action of allelic transferases and the attachment of sacharides to precursor chains. In the Caucasian population, P1 has a frequency of 80% (it is higher in African population, lower in Asian population). .
P antigen is also present on other cells, such as leukocytes, in soluble form it can be found in plasma and cyst secretions. It also serves as a receptor for bacteria (eg for parvovirus B19). They also take part in lymphocyte differentiation and cell adhesion.

Theantibodies are mostly of the IgM class, active at low temperatures and tend to be clinically insignificant (rarely mild late post-transfusion reactions, no HONs have been reported). An anti-P autoantibody, IgG class, often referred to as Donath-Landsteiner hemolysin, may, however, be significant since it may cause severe haemolysis in patients with autoimmune haemolytic Anemia (in paroxysmal cold haemoglobinuria).

ISBT classification: 006;;
This system consists of more than 30 glycoprotein antigens (CD238), which differ in the structure of the protein. It is the first system discovered using the AGH test (in 1946). It got its name from the first described case report where the patient's last name was: Kelleher. Kell antigens are involved in the activation of peptides during vasoconstriction and can be inactivated by certain chemicals (eg dithiothreitol). They are the strongest immunogens right after antigen D. The most important allelic pairs are:

The KEL is located on the chromosome 7 (7q34) and is associated with the X-linked XK gene, the product of which is the Kx protein. If this protein is missing (due to hemizygotic mutation or deletion of the XK gene), all Kell antigens are significantly attenuated. Thus, immunized individuals can produce anti-Kx and anti-Km antibodies. This phenotype is called McLeod (or McLeod's syndrome) and is seen in acanthocytosis and muscular or neurological diseases. .
Rarely, the null K0 phenotype also occurs, where all Kell antigens are missing. Individuals with this phenotype may produce an anti-K antibody (s) after immunization that reacts with all Kell system antigens (except the K0 phenotype). The Kmod phenotype, typical for very weak expression of Kell system antigens, was also described.

The antibodies are clinically significant with the potential for causinng severe post-transfusion reactions and HON (the difference from anti-D is that the anti-Kell antibody causes immune destruction of erythroid progenitors). These antibodies are of the IgG class and result from immunization (although cases of "natural" post-infectious antibodies have been reported). They are among the so-called thermal antibodies and react well in an indirect antiglobulin test. Due to the high immunogenicity, transfusion compatibility test is recommended in girls and women of childbearing potential. Note According to the STL JEP recommendation, all blood donors must be typed for basic Kell antigens..
[2], [1]

ISBT classification: 009;
The first anti-Jka antibody was detected in 1951 in the serum of an American woman (surname Kidd). The carrier of these antigens is a glycoprotein whose function is a membrane transport of urea. These antigens are also part of other tissues (eg leukocytes, kidneys, brain, heart). This system consists of an allelic pair of codominant Jka and Jkb antigens, identified by the SLC14A1 gene (18q12.3)..
Frequency in Caucasian population: Jk (a +, b +) over 50%. The Jk phenotype (a-, b-), which results from homozygosity of the non-functional JK gene, is rare. Individuals with this phenotype can produce anti-Jk3 antibody.
The antigens of this system are highly immunogenic and their reactivity can be increased by the addition of an enzyme.

Antibodies are not common, but they are very dangerous. They usually occur after immunization, but there is a rapid attenuation (rapid phagocytosis of the erythrocytes sensitized by them). As a result, they are difficult to detect on further pre-transfusion examination (sometimes they only react with homozygous blood cells). It belongs to the IgG class, but a mixture with IgM, which activates complement, may also occur. They then cause severe hemolysis, both acute and late. Rarely, they cause HON in fetomaternal incompatibility. They react in an indirect antiglobulin test. Autoantibodies may also be present, especially in connection with the drug type AIHA..
[2], [1]

ISBT classification: 008
The first antibody was detected in 1950 in the serum of a polytransfused hemophiliac (Mr. Duffy). The Duffy glycoprotein (CD234) carries a basic pair of Fya and Fyb allelic antigens. These are the result of DARC gene expression (1q23.2).).
Duffy antigens serve as receptors for chemokines and facilitate invasion by certain types of plasmodia (eg, malaria agents). In the malarial areas, the Fy (a-b-) phenotype is widespread, which confers erythrocyte resistance to malarial infection and thus serves as a natural defense mechanism. This Fynull phenotype is caused by homozygosity for the null allele-mutation in the GATA-1 bound region of the Duffy gene promoter.
Frequency: Fy(a+, b+) 49%; Fy(a+, b-) 17%; Fy(a-, b+) 34%.
The weak form of Fyb is called Fyx. In laboratory tests using enzymes, antigens (with the exception of trypsin) are destroyed. The dose effect in homozygous types is also known.


Antibodies are IgG, react in NAT at 37 ° C, are a mixture of alloantibodies and can activate complement. They tend to be uncommon, but have the potential to cause post-transfusion reactions, occasionally HON.
[2], [1]

ISBT classification: 007
The antigens of this system were first described in 1946. The two main antigens of this system,Lea and Leb,they are not allelic and their origin is similar to that of the AB0 system. The product of the Le, FUT3 gene (19p 13.3) is a fucosyltransferase that alters the H-precursor type 1 chain (to form LeLea) and / or the H chain type 1 (to form LeLeb). The final phenotype thus also depends on the efficiency of the Se (FUT2) gene.


The synthesis of these antigens takes place in plasma, secretions and endodermal tissues. This Lewis substance (from plasma) adheres to erythrocytes and thus forms Lewis antigens (which are therefore missing from the erythrocytes of newborns). The potency of the antigen may vary during pregnancy or in association with gastrointestinal disorders (eg Helicobacter pylori infection). Lewis antigens also function as cellular ligands for E-selectins.
The most common phenotypes are Le (a +, b-) and Le (a-, b +). In the presence of the " le, se’ " genes, the Le phenotype (a-, b-) is formed. The Le (a +, b +) variant is rare in the Caucasian and African populations.

Antibodies are classified as so-called cold, so they react at lower temperatures. They are not considered clinically relevant, but rare cases of antibodies reacting at 37 ° C in an antiglobulin test and / or activating complement with the potential for a post-transfusion reaction (rather in anti-Lea) have been reported. .
[2], [1]

ISBT classification: 005
The specificity of anti-Lua was described in 1945, anti-Lub ten years later. Currently, 19 antigens are included in this system, all of which are located on two glycoproteins (CD239). These proteins are different transcripts of a single gene (the LU gene), have an immunoglobulin structure, and belong to receptors and adhesive molecules (laminin ligands).


Antigens are poorly developed at birth and increase with age. They are involved in the differentiation, adhesion, migration and proliferation of cells, in the release of mature erythrocytes into the peripheral blood. Lu glycoprotein is more commonly expressed on malignant cells. The frequency of Lu'Lua is around 5-8% in the Caucasian and African populations (it is rare elsewhere). In contrast, Lub ranks among the high frequency (HFA = High Frequency Antigen) in all populations. There is also a rare phenotype (Lutheran null), which can be caused by three types of genetic mechanisms:

Antibodies are uncommon and their clinical significance is not very great. They may cause mild late post-transfusion reactions, but are not associated with HON, due to poor expression on fetal blood cells. They tend to be IgM classes and react better at lower temperatures.
[2], [1]