Viruses are small, non-cellular organisms that contain only one type of nucleic acid and replicate only in living cells using host proteosynthesis . It differs from all other living organisms in the following points:

They are characterized by high species and organ specificity. We distinguish between plant, animal and bacteriophage viruses, which attack bacteria. Some viruses are also significantly involved in the development of neoplasms, we call them oncoviruses. Viruses can be vectors that transmit genetic information between cells. It is used in genetic engineering and gene therapy.

A. Mayer was the first to experimentally transmit a viral disease in 1879–1882, he dealt with the tobacco mosaic disease (see Genetics in the Data). He managed to prove that the juice from the rubbed leaves can transmit the disease to healthy leaves. Because he failed to grow any bacteria from the infectious extract, he thought the causative agent was "enzyme-like contagion." His work was followed by D. Ivanovsky, who in 1892 managed to prove that the juice from infected leaves remains infectious even after filtration through bacteriological filters. Mayer's collaborator M. W. Beijerinck has shown that the diluted juice, after filtration, regains its original "strength" after multiplication in living plant tissue. He expressed the idea that the cause of the disease is not a toxin, but something completely different from the hitherto known bacteria, he called it a "virus".

There are three main theories trying to explain the origin of viruses:

A Virion is a term used for one viral particle. They are bodies of various shapes. They can be spherical, rod-shaped, fibrous. The inner part of the virion is called the nucleoid. It is composed of nucleic acid and is surrounded by a protein shell capsid. The capsid is composed of protein subunits - capsomeres (1-10, 20,… proteins encoded by viral genes). Their shape allows them to attach to each other and form a larger unit. With regard to the type of symmetry, we distinguish two main groups of capsids: cubic and spiral (helicoidal). The unit is called a nucleocapsid. The simplest virions are only bare nucleocapsids (picornaviruses, papillomaviruses, adenoviruses). In addition to the capsid, enveloped viruses have an additional coat of bilayer proteins and lipids and virus-specific glycoproteins; these are built into the cell membranes of infected host cells and allow the identification of both virus and virus-infected cells.

Capsid of cubic symmertry in adenoviruses

In the vast majority of viruses, it consists of an outer lipoprotein complex and a species-specific internal protein (so-called M-protein anchoring the nucleocapsid). The lipoprotein complex consists of a lipid bilayer (derived from different parts of the host cells according to the site of origin of the virus) and viral glycoproteins. These glycoproteins consist of symmetrical formations called peplomers, usually protruding like protrusions from the viral envelope. Peplomers serve to facilitate the adsorption of viruses by the susceptible cell. Depending on the site of origin, viruses may be enveloped by the nuclear membrane (Herpesviruses), membranes derived from endoplasmic reticulum cisterns (Arenaviruses), or cytoplasmic membranes (Orthomyxoviruses).

The genome is made up of one molecule of nucleic acid (DNA or RNA). In viruses, nucleic acid carries information for self-replication and synthesis of other viral proteins, as well as infectivity. Infectivity is a measure of the ability to express this information in host cells. Both types of nucleic acid can occur as double-stranded (dsDNA, dsRNA) or single-stranded (ssDNA, ssRNA) and the "chromosome" is either linear or circular. The amount of nucleic acid is very diverse, the DNA of poxviruses could encode the synthesis of one hundred proteins, while the RNA of picornaviruses could only four. Parvoviruses have such a low DNA content that they are unable to reproduce themselves and are dependent on other viruses (adenoviral satellites).

Upon entering the susceptible cell, viruses begin the reproductive cycle. Susceptible host cells use the transcriptional and translational apparatus for their reproduction. A susceptible cell is one in which a complete reproductive cycle takes place and new infectious virions are released. This process can take place under the picture of intracellular infection. In a non-perceptive cell, the cycle does not start, and in a non-permissive cell, the cycle ends prematurely. Viruses multiply in the host cell and lyse it. The released virions attack other cells. This is called the lytic cycle. Sometimes NKs do not replicate and produce mature virions after the virus enters the host cell. The virus genome integrates into and replicates with the host cell genome. We call this the lysogenic cycle. When the DNA of a virus is integrated into the chromosome of a host cell, we call it a provirus. In mixed infections, genetic information recombines with each other. The process contributes to the variability of the genotype and phenotype of the viruses. 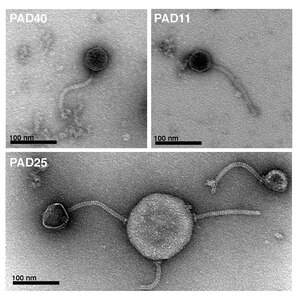 Electron microscopic image of bacteriophages of the Siphovirus and P. acnes families

The basic distinguishing feature of viruses is the nature of the host - according to this criterion there are viruses of bacteria (bacteriophages), protozoa, viruses of yeasts and fungi, plants, insects, and vertebrates. The classification system breaks down viruses according to the following parameters:

Viruses that are able to incorporate their genetic material into the host genome - such as adenoviruses - are used to introduce genes. These were originally isolated from the mucous membranes of the human respiratory tract. Adenoviruses cause, for example, respiratory diseases, conjunctivitis, and inflammation of the intestinal mucosa.

Another use of viruses in medicine is the preparation of vaccines - for example, the hepatitis A vaccine contains the non-infectious hepatitis A virus. One type of insect virus (baculovirus) is also used to make proteins. For example, proteins that are part of Cervarix (cervical cancer vaccine) are being prepared on the basis of this baculovirus system.