They arise from a 'pluripotent stem cell' of the bone marrow. Upon activation, they have the ability to produce so-called cytokines, which provide intercellular signaling and thus the cooperation of immunocompetent cells. A number of different molecules with signaling and receptor properties are formed on the surface of immunocompetent cells. Some are common to several cell populations, others are typical of only one cell line. They can be used as so-called "markers" to differentiate cell populations.

Complement is a "non-cellular" component of immunity, but it is of great importance. It is a group of blood serum proteins that bind to the antigen-antibody complex. It enhances the destruction of cellular antigens by phagocytes ( 'opsonization' ) or may itself have destructive effects (eg membrane disruption). 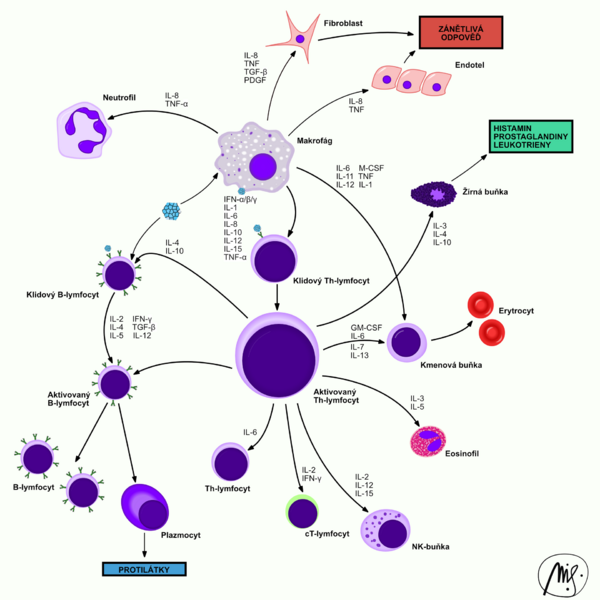 Monocytes are 'large cells' , do not contain markedly staining granules, and their nucleus is not segmented. They can be divided if necessary.

Macrophages are used in stimulation, such as "APCs" ("antigen presenting cells"), as well as in the final phase of the immune response, where they remove the consequences of attack (damaged tissues, cells, metabolites, antigen-antibody complexes). ', etc.).

They contain a large number of cytoplasmic lysosomes, which play an important role both in the intracellular elimination of microbes, toxins and wastes, and in the preparation of antigen for cell-specific immunity. On the plasma membrane, they have a receptor equipment that allows them to contact the microorganism and interact with lymphocytes. The most important ones include:

'Antigen presenting cells (APCs) are all cells that are able to process an antigen and present its' epitopes' (antigenic determinants) to T-lymphocytes. The molecules' HLA II are essential for this. class' .

Neutrophilic granulocytes (neutrophils, polymorphonuclear leukocytes or microphages) are white blood cells which, together with eosinophils and basophils, are granulocytes. 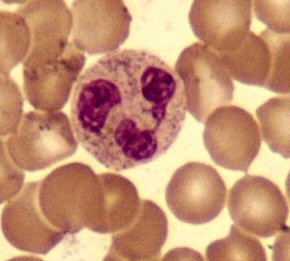 The importance of anti-infective defense lies in defense against extracellular bacteria. Neutrophils are able to perform effector functions immediately, without signals from other cells.

They make up 60-70% of peripheral blood leukocytes. They occur in the bloodstream for 6-12 hours and in the tissue for 4-5 days. Only 7% of the total number is found in the peripheral blood, 93% is found in the bone marrow (it changes under the influence of inflammatory cytokines and bacterial products). The major chemotactic agent is the chemokine IL-8.

The main function of neutrophils is phagocytosis. Their azurophilic granules contain many lytic enzymes. When killing microbes, they can cause so-called oxidative flare-ups with a sufficient supply of energy. At the same time, they secrete substances that lead to the development of an inflammatory response.

In addition to phagocytosis, neutrophils also form extracellular networks - NETs (Neutrophil Extracellular Traps). Neutrophil granulocytes die other than by necrosis and apoptosis - a process called NETosis (also called suicidal NETosis). The action of foreign pathogens or cholesterol and urate crystals induces changes within the neutrophil: loss of heterochromatin arrangement, disruption of nuclear segmentation, disintegration of the nuclear envelope, disintegration of mitochondria. The caryoplasm and cytoplasm mix, the cell membrane ruptures and they are released into the ECT as part of the future network. Upon spreading the mixture released from the cell, NET is formed, which is a thin fiber derived from nuclear chromatin with granular and cytoplasmic neutrophil enzymes. This complex network serves mainly to capture and immobilize microorganisms, associates with antimicrobial peptides and helps eliminate bacteria. NETs are involved in both physiological and pathological inflammation and can cause alteration if the regulation of their production is disturbed. The pathological consequences of NETosis are, for example inflammatory changes in the development of atherosclerosis, the development of lung diseases (e.g. COPD) and autoimmune disorders (especially lupus erythematosus).

Neutrophils are not among APCs!

The progenitor cell, not just neutrophils, has an adhesive molecule CD34. It is found in small numbers in the marrow for life.

Their nucleus is made up of 2–5 lobes, the number of lobes increases with the age of the cell (the youngest forms of neutrophils do not have a segmented nucleus and are therefore referred to as rods). There are small, light pink granules in the cytoplasm of neutrophils. Their main role is phagocytosis.

Neutrophils do not have the ability to divide further.

Cells whose granules are markedly stained with eosin (red) and the nucleus has a "bilobular" shape ("glasses"). Their main function is to defend against parasites . In the case of activation, the eosinophils degranulate and the substances contained in the granules can act in two ways:

Eosinophils are likely to be involved in the course of 'allergic reactions.

Basophil granules are stained with basic dyes (hematoxylin). They contain mainly histamine and heparin. They respond to the activity of eosinophils.

Mast cells ( 'mast cells) are probably basophil cells that have traveled to the tissues. Their granules are very similar to basophils.

These are only 'lymphocytes' . Recently, there has been controversy over whether B-lymphocytes should be included in non-specific immunity, as their receptors may change over the course of a cell's life.

They form a "heterogeneous group" of cells (differing in size and morphology) and make up about 20-45% of all blood leukocytes.

'T-lymphocytes' are formed in the thymus by the division of precursors that have entered the thymus from hematopoietic tissues (especially bone marrow) in the prenatal period. Here, they "learn" to recognize their own and foreign antigens using ' HLA Antigens' . Cells that are unable to respond to strangers or react too aggressively to their own receive apoptotic signals and die. T-ly play a key role in the "resolution" of antigens, working very closely with APCs. 'They initiate and moderate specific immune responses' . The specificity of T-ly is given by their "T-cR" (T-cellular receptors).

According to their involvement in the immune response, we distinguish:

'B-lymphocytes' form and mature in the bone marrow. For their full activation, it is necessary to encounter a specific antigen that occurs in the secondary lymphatic tissues. It is recognized by their "B-cR" (B-cellular receptor).

They work very closely 'with T-ly' , they are controlled by their cytokines.

Upon encountering the antigen, a portion changes to "" plasma cells ", which move into the bone marrow and produce antibodies.

Course of the immune response