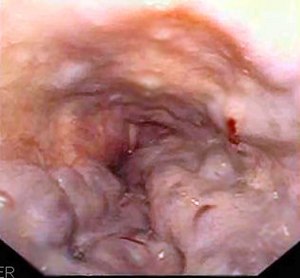 The cause of varicose veins is long-lasting portal hypertension. Increased pressure leads to dilation of portocaval junctions, specifically between the left gastric vein (basin v. Portae), the oesophageal vein and the azygos vein (basin v. cava superior). There is a significant risk of bleeding from oesophageal area when the portal pressure rises above 12 mm Hg. Large varices (> 5 mm) and thin-walled varices bleed more often.

A rupture of the varix leads to bleeding into the oesophagus, which irritates the stomach and usually results in bright red hematemesis. Subsequent melena is associated with the passage of blood through the digestive tract. With massive bleeding, signs of hemorrhagic shock begin to appear. Bleeding from esophageal varices is diagnosed by endoscopy.

Bleeding from oesophageal varices is the cause of death in half of patients with advanced liver cirrhosis.

In the first line of hospitalisation in the ICU, ensuring central venous access and administration of erymass (RBCs) to compensate for blood loss. Subsequently, the bleeding is stopped endoscopically, by sclerosing, EVL. Due to the origin of varicose veins, sclerosing, operative removal of varicose veins, must be targeted at the cardiac veins. every 4 h, oesophageal variceal somatostatin (5 days).

With continued bleeding, endoscopic therapy is repeated, exceptionally, with unstoppable massive bleeding, the Sengstaken two-balloon nasogastric tube is introduced. The first balloon attaches to the stomach, where it compresses any bleeding, and the second balloon inflates in the oesophagus, compressing the varices. The balloons are left in situ for a maximum of 24 hours, otherwise ulceration will occur. Aspiration can be a complication.

Recurrence of bleeding is very common (up to 2 years 60–100% of patients) and β-blockers are used preventively (non-selective, in sufficient dose), from invasive solutions then repeated ligation/sclerosis of varices or TIPS/surgical portocaval joint surgery.

TIPS (transjugular intrahepatic portosystemic shunt) works to prevent the formation and bleeding of oesophageal varices because it normalises portal hypertension. The design is three-step:

Complications of performance are the emergence or worsening of encephalopathy, or clutch stenosis.

Bleeding has a high lethality and frequent recurrences (prevention of necessities).

Ascites is an increased amount of free fluid in the abdominal cavity (the normal is up to 150 ml). Ascites is often accompanied by dyspepsia, flatulence, shortness of breath and difficulty moving. An umbilical hernia may occur due to increased intra-abdominal tension. A small amount of ascites may not cause any subjective difficulties. 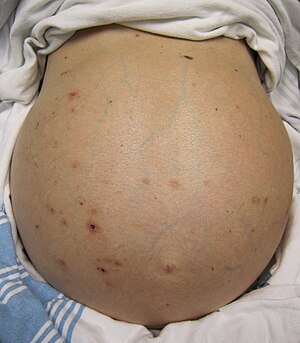 The most common cause of ascites is liver cirrhosis.

In portal hypertension, the pressure in the hepatic sinusoids increases, leading to the penetration of albumin into the extravascular space. Fluid leakage into the hepatic interstitium increases. The fluid is drained by the lymphatic system, and if drainage is not sufficient, excess fluid escapes through the liver surface into the peritoneal cavity and ascites forms.

Large ascites can be tense or non-tense. The abdomen is immobile when tense ascites occurs. Ascites that do not respond to the maximum possible diuretic treatment are referred to as refractory ascites.

Ultrasound examination also shows a small increase in peritoneal fluid. Ascites is imaged as an anechogenic fluid on ultrasound. Ascites is also imaged on other imaging methods (CT, magnetic resonance imaging). At the first occurrence of ascites or sudden deterioration of the patient with chronic liver disease, diagnostic ascites puncture and examination of laboratory parameters of ascites fluid are indicated in order to exclude spontaneous bacterial peritonitis and determine serum-ascites albumin gradient (SAAG> 11 g / l → PH).

Spontaneous bacterial peritonitis is a bacterial infection of the ascites without a detectable, surgically treatable source of infection. This is a common complication of ascites (30%) of cirrhotic origin.

It includes a laboratory test, in which we look for increased ammonia, which is a high level of ammonia in the blood.

The ideal treatment is liver transplantation, because after its implementation, changes in the body are usually fully reversible. It is also possible to limit protein intake and administer lactulose or lactitol, which serve to induce osmotic diarrhea. ATBs are also given against the intestinal microflora, which reduces the amount of ammonia produced by the intestinal bacteria. For example, rifaximin is used, which acts only on the intestinal microflora and has no systemic effects and associated systemic side effects.

Hepatorenal syndrome is a functional kidney failure in liver disease with portal hypertension. It occurs almost exclusively in patients with ascites.

The basis is systemic circulatory changes in portal hypertension.