Calculi/concretions are solid formations ("stones") formed in organ outlets, especially in the places of their enlargement (gallbladder, renal pelvis, bladder, etc.). Concretions can occur in the body in various numbers (individually, multiple). Their size can range from a grain of sand to an object several centimeters in size. Their chemical composition depends on the place of their origin.

Lithiasis is defined by the presence of stones in the body. Several types of lithiasis are known according to the place where the stones occur. 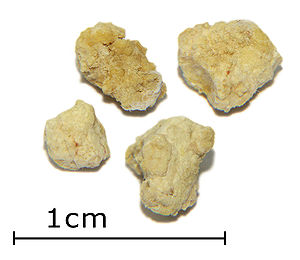 The shape of the stone is usually spherical or elliptical when stored loosely. If the formation completely fills the cavity of their origin, it takes the shape of the cavity. If there are more stones in one cavity pushing on each other with their surfaces in contact, the stones will be flattened, the so-called faceted concretions. 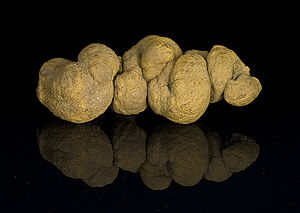 Formation of stones and its causes[edit | edit source]

The increase in the concentration of the stone-inducing substance is mostly caused by endogenously (metabolic disorders - diathesis), but factors may also be involved exogenously (dehydration urolithiasis, diet with excess cholesterol in cholelithiasis, increased production of bilirubin in hemolysis).

It is caused during inflammation - either by mixing the colloid with exudate or by getting in touch with a wettable surface (peeled epithelium, bacterial colonies, necrotic tissue, etc.).

In general, the manifestations and complications of stones in the body are referred to as lithiasis.