STH secretion is controlled by two hypothalamic hormones that are secreted into portal hypophysical blood:

Since neither GRH nor somatostatin can be directly measured, the change in STH secretion should be considered as a manifestation of the sum of the two hypothalamic hormones. In addition to this regulation, a number of other factors contribute to the regulation of STH secretion (see below).

GRH stimulates both synthesis and secretion of STH in the somatotropes of the adenohypophysis (by the formation of cAMP). GRH of both 40 and 44 amino acids are present in the human hypothalamus. GRH segregating neurons are located in the nuclei arcuati and their axons end up in the outer layer of the eminentia medialis. GRH is synthesized from a larger precursor of 107 or 108 amino acids (differences in the presence or absence of serine at position 103). Human GRH closely resembles many gastrointestinal peptides, including secretin, gastrin, vasoactive intestinal peptide (VIP) and gastric inhibitory peptide. The half-life of GRH is 50 min. Administration of GRH results in rapid STH secretion (within minutes), peaking after 30 minutes and persisting for 60-120 minutes.

Somatostatin inhibits STH secretion (reducing the production of cAMP in somatotropes) and TSH (by increasing the direct inhibitory effect of thyroid hormones on adenohypophysical thyrotropes). Somatostatin-secreting cells are located in the periventricular region of the hypothalamus immediately above the optical chiasma and their nerve endings are diffused in the outer layer of the eminentia medialis. Somatostatin is a tetradecapeptide and, in addition to the hypothalamus, is also present in Langerhans pancreatic islet D-cells, gastrointestinal mucosa and parafollicular (C-cell) thyroid cells.

The precursor to somatostatin has 116 amino acids. In the hypothalamus there is a major somatostatin-14, in the intestine there is somatostatin-28. Somatostatin also has strong inhibitory effects on other hormones, including insulin and glucagon(paracrinically in Langerhans islets), gastrin, secretin and VIP (in the gastrointestinal mucosa). Somatostatin secretion increases with increased levels of MET and IGF-I (see below). A long-acting synthetic analogue of somatostatin (octreotide acetate) is used in therapy (for excess STH conditions).

STH washes into the blood in pulses. This irregular, intermittent secretion is associated with sleep and depends on age. It peaks at 1-4 hours after falling asleep (during sleep phases 3 and 4). These nocturnal secretory pulses account for about 70% of the total amount sequestered per day and are higher in children, decreasing with age. GRH secretion is episodic and its increase is correlated with increased STH secretion. Somatostatin secretion is rather tonic. 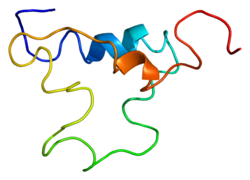 The effect of growth hormone is mainly mediated by insulin-like growth factors (IGF-I and IGF-II) (STH also has some direct effects - via cAMP). IGF-I (originally somatomedin C) and IGF-II (originally somatomedin A) are major and, in humans, probably the only somatomedins in the blood. Both have a structure similar to a proinsulin molecule and both bind to plasma proteins (which prolongs their half-life in the blood). To date, six IGF-binding proteins (IGFBPs) have been identified and distributed differently in different tissues. All are present in plasma. About 95% of IGF circulates in the blood in binding to IGFBP-3, the serum level of which is directly proportional to the concentration of MET and nutritional status of the organism. The lack of MET causes lower concentrations of both IGF-I and IGF-II, but excess MET increases IGF-I without affecting IGF-II.

The only gene for prepro- IGF-I is localized on the long arm of chromosome 12. IGF-I is a 70 amino acid base polypeptide. Its receptor (type I receptor) is located on the cell membrane and resembles an insulin receptor (two alpha and two beta chains). Binding IGF-I to type I receptors stimulates tyrosine kinase and then autophosphorylates the tyrosine molecules, resulting in cell differentiation or division (or both). IGF-I receptors are 'down-regulated' at increased concentrations of IGF-I. Conversely, decreased IGF-I concentrations lead to a proliferation of IGF-I receptors. The most important site for IGF-I synthesis is the liver (but it is also produced by other organs, such as cartilage). It appears to be passed on to adjacent cells that are affected by paracrine (or is an autocrine factor that affects the cell from which it originates), so it may not have the greatest effects in the blood.

Before birth, IGF-I secretion does not depend on growth hormone (see below), but after birth it is stimulated by MET and IGF-I has a marked stimulating effect on growth. IGF-I concentrations in the blood rise in childhood and peak at the time of puberty, then decline to low levels in old age. IGF-I is currently produced by recombinant DNA technology. Administration of IGF-I increases nitrogen retention and decreases blood urea nitrogen and stimulates growth in STD-resistant patients (Laron nanism)

IGF-II is a neutral peptide consisting of 67 amino acids. The prepro-IGF-II gene is located on the short arm of chromosome 11 (near the preproinsulin gene) and is expressed in adults only in the chorioidal plexus and meninges. The type II receptor preferentially binds IGF-II and is identical to the mannose-6-phosphate receptor, a single-chain transmembrane protein. Most of the effects of IGF-II appear to be mediated by interaction with the type I receptor, and independent effects of IGF-II via the type II receptor have also been described. IGF-II is largely independent of MET and is important in the growth of the hairdryer before birth.

Alongside GRH and somatostatin, other factors regulate STH secretion:

With permission of author Clara Mědílková