The incidence of ALS in the population worldwide is 1–2:100,000 (prevalence 4–6:100,000  ), and this is relatively uniform across nationalities. The disease usually affects individuals between the ages of 50 and 70. year of age, occurrence is rare before the age of 40. ALS is more common in men than in women by a ratio of 1.3:1.  The disease occurs mostly sporadically, in 5–10% it occurs as a hereditary form (see Forms of ALS ).

Etiopathogenesis is not fully elucidated. Viruses , autoimmune mechanisms , and the toxic action of glutamate and free oxygen radicals are suspected( ROS ).

Microscopically, one can see atrophy of neuron bodies and spherical formations contained in their cytoplasm . These formations are formed by strongly argentophilic bundles of neurofilaments, which may also contain other cellular elements, e.g. mitochondria . Small, round, eosinophilic bodies, so-called Bunina bodies , and eosinophilic inclusions similar to Lewy bodies can also be seen in the cytoplasm of neurons .

A typical picture is a combined paresis of central and peripheral type. Muscular atrophy, fasciculation , but also tendon-bone hyperreflexia and spastic phenomena are present. Usually, the image is asymmetrical on one upper or lower limb, especially acral .  fine motor skills of the hand and its muscle strength are primarily affected, gradually the muscles of the forearm and arm are affected. The disease progresses relatively quickly , without remissions, and gradually affects more muscle groups of the limbs and trunk.  motoneurons of the cranial nerves are gradually affected, primarily the motoneurons located below in the brainstem are affected. Palsy of the oculomotor nerve is thus relatively rare, unlike damage to the hypoglossal nerve .  Disability IX.–XII. of the cranial nerve, the image of bulbar syndrome is created . However, bulbar syndrome can sometimes be the first symptom.

Sensitivity, sphincter activity and psyche are normal even in severe ALS.

ALS is a fatal, incurable disease , with an average survival time of 2–3 years.  There are also forms with slower progression. The cause of death is respiratory muscle failure or bulbar syndrome, in which the cough reflex is extinguished, aspiration and suffocation may occur.

According to isolated or predominant motoneuron involvement[edit | edit source] 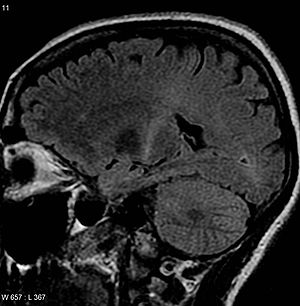 MR - Increased signal of the inner posterior part of the capsula interna, which can be transmitted to the subcortical white matter of the motor cortex. Demarcation of the corticospinal tract is manifested by the clinical diagnosis of ALS.

In addition to the anamnesis and neurological examination , an EMG recording is examined , which will demonstrate the loss of motor units and denervation manifestations of multiple segments.  CSF proteinuria may be slightly elevated (less than 200 mg/dL). Similarly, muscle-type creatine kinase may be elevated .

Causal therapy is not known .