The term paraneoplastic syndrome refers to the clinical manifestations of a tumor that are conditioned by its presence, but manifest in a tissue in which the tumor is not present. 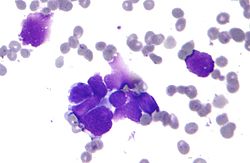 Tumors may exhibit the production of hormones, or functionally and structurally similar agents, even though they did not arise in tissue with physiological hormonal activity.

Cachexia as a part of paraneoplastic syndrome[edit | edit source]

Cachexia occurs in up to half of patients with cancer. In addition to visible weight loss and muscle weakness, it is also manifested by a weakening of immune reactions and anorexia.

The pathogenesis of tumor cachexia is not yet exactly known. The possibility of initiating gluconeogenesis by the tumor due to its increased glucose utilization, which leads to the breakdown of proteins and lipids to form glucose, is being considered. The condition cannot be affected by the administration of nutrients and vitamins. Many cytokines are probably involved in the whole process. TNF-α, IL-1β, and IFN-γ are of great importance.

other manifestations of tumors[edit | edit source]