Examination of the Thyroid Gland

The thyroid gland is one of the endocrine glands. It consists of two lobes, which are placed at the sides of the larynx and the upper part of the trachea. Both lobes are connected by isthmus. Under normal circumstances, the lobe length is 5–8 cm, the width 2–4 cm and the lobe thickness 1.5–2.5 cm. The isthmus is about 1.5 cm long. The whole thyroid gland weighs in the range of 30–40 g. The basic functional unit of the thyroid gland is the follicles. They are closed bags of irregular, spherical shape. The wall of the vesicles is formed by a single layer of epithelial cells. The follicles are filled with colloid. The main component of the colloid is thyroglobulin, which contains the main thyroid hormones thyroxine and triiodothyronine. The third thyroid hormone is calcitonin. It is formed by parafollicular cells stored in small groups in the interstitial ligament between the follicles. 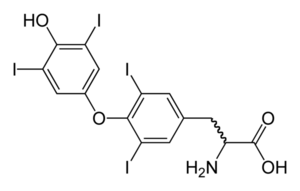 The thyroid gland plays a major role in controlling the metabolism of human body. It is unique in the sense that its function (production of triiodothyronine: T3, reversed triiodothyronine: rT3 and thyroxine) is dependent on the supply of iodine in food or water. In the blood, T3 and T4 are bound to globulin and prealbumin and then penetrate the plasma membrane into the cells. However, up to 90% of thyroxine is converted to triiodothyronine before binding to the cytosolic receptor. The hormone-receptor complex is then transported to the nucleus, where it affects the synthesis of mRNA and thus the synthesis of various types of proteins. Parafollicular cells are involved in the regulation of calcium and phosphatemia by producing calcitonin.

The secretion of thyroid hormones is regulated along the Hypothalamus-adenohypophysis-thyroid gland axis.

Thyroid problems are not uncommon, they affect women more often. Hormone production may be excessive (hyperthyroidism) or insufficient (hypothyroidism), the volume of the gland may be increased, which may cause oppression of vital structures in the neck, or the formation of nodules, behind which the tumor growth may hide.

Diagnosis of thyroid disease is a process that can involve many procedures, including clinical examinations, blood tests, various imaging methods, biopsy, and more. The basis is, of course, an anamnestic examination. In addition to the current problems, important indicators include the data on thyroid diseases in the family (the family incidence is present in almost half of the cases of thyroid diseases), the places, where the patient lived (due to possible iodine deficiency), the medication (some can cause thyroid disorders), and the history of past diseases, injuries and operations (thyroid diseases can initiate).

A test that clarifies how well the gland absorbs and processes iodine (iodine uptake sensing). The patient is orally administered a substance with a radioactive isotope iodine (iodine 123) and a special device monitors the extent to which and where the element is processed in the thyroid gland. This imaging method identifies the so-called "hot" and "cold" nodules in the gland.

It can detect nodules in the gland hidden during palpation, it is used to evaluate the nodule and spread. It distinguishes a cyst filled with fluid from a solid. However, it does not distinguish a benign nodule from a malignant one. With the help of ultrasound, we can measure the size and estimate the volume of the gland.

A tissue sample of the thyroid gland for microscopic examination is taken by a puncture with a thin needle.