Sexual adolescence in a woman manifests in the development of secondary signs and the onset of menstrual cycle. All the changes are conditioned by the fluctuating secretion of estrogens and gestagens from ovaries.

The endocrine function of the ovaries is controlled by regular cyclic release of pituitary hormones: FSH (follicle-stimulating hormone) a LH (luteinizing hormone). Macroscopically, the beginning of the cycle is considered to be mestruation (bleeding) caused by peeling of the upper layers of the uterine mucosa. On day 6, FSH secretion increases. Under its influence, the maturation of the follicle in the ovaries starts. The theca cells of the follicles produce estrogens. LH levels also rise in the middle of the cycle. .The follicle ruptures and releases the egg into the abdominal cavity near the uterine tube. The cavity of the follicle is filled with blood and fluid (corpos haemorhagicum). Later, the cavity is filled with proliferating theca cells (corpus luteum). At the same time, progesterone production is increasing.

In the first phase, the endometrium proliferates considerably under the influence of estrogens (proliferative phase). After ovulation with an increase in progesterone, the glands multiply and the mucosa is ready for egg nidation (secretory phase). If fertilization does not occur, the upper layer of the endometrioum is separated - menstrual bleeding.

The major estrogen in humans is estradiol. Other physiologically active are estrone and estriol . As these substances belong to the category of steroid hormones (hydrophobic), they are almost 100% transported in the blood bound to the so-called SHBG (sex hormone binding protein, globulin). Although oral estradiol is active after oral administration, it is better to use semisynthetic derivatives (mainly ethinyl estradiol ) for the high first-pass effect . 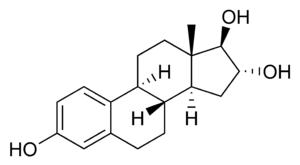 There is mainly a stimulating effect on the vagina, uterus and mammary glands. Medium doses lead to breast tension, endometrial hyperplasia and subsequent excessive bleeding . They can have a teratogenic effect when given during pregnancy. Long-term estrogen use is also associated with more frequent gallbladder disease.

Gestagens (progestins) are a group of female sex hormones with antiestrogenic and antigonadotropic effects. The most important is progesterone.

It is formed in the corpus luteum of ovaries and placenta (after 6-8 weeks of pregnancy; 30-40 times more), as an intermediate product in the synthesis of androgens and estrogens also in the adrenal cortex and in small amounts in the testes.

It is synthesized from cholesterol via the intermediate product pregnenolone, from which it differs in the A-ring arrangement.

It binds to the protein carrier in plasma. It is rapidly metabolized in the liver – it has a very low biological availability and a short half-time. Progesterone is p.o. ineffective due to active metabolism in the liver.

After conjugation with glucuronic acid (inactivation) in the liver, it is excreted in the urine as pregnanediol.

Compared to estrogens they have a minimal effect on the composition of plasma proteins (they do not affect plasma fibrinogen levels). They significantly affect sugar metabolism and stimulate fat storage.

The main indication is application as an anticonception. Long-term applications can also be used for long-term ovarian suppression, for example in the case of endometriosis. They have no effect on inducing abortion. The toxicity of progestins is low, although they may cause an increase in blood pressure and a decrease in HDL.

The main dangers of using contraceptives. Thromboembolic events (AIM, CMP, pulmonary embolization) in elderly female smokers and in women with a familial burden of thromboembolic disorders are described in particular detail . Today, the risk of these complications during therapy is lower compared to the incidence during pregnancy .

There is compelling evidence that these substances reduce the incidence of endometrial and ovarian cancer . The results in breast cancer are inconclusive. Cervical cancer is probably unaffected. The risk was high with older preparations with a higher estrogen content.