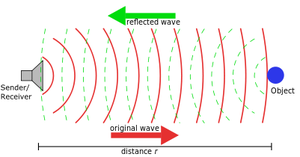 Ultrasound is sound waves with frequencies higher than the upper audible limit of human hearing. Ultrasound is a 'normal' sound in its physical properties, except that humans cannot hear it. This limit changes from person to person and is approximately 20 kilohertz (20,000 hertz) in healthy, young adults. Ultrasound devices operate with frequencies from 20 kHz up to several gigahertz. Ultrasound sonography is a method that uses sound waves to produce pictures of the inside of the body. This method helps diagnose the causes of pain, swelling and infection in the body’s internal organs, also to examine a baby in pregnant women and the brain and hips in infants. It’s also used to help guide biopsies, diagnose heart conditions, and assess damage after a heart attack. Ultrasound is noninvasive method, and does not use ionizing radiation.

An instrument called a transducer emits high-frequency sound, unable to hear to human ears, and then records the echoes as the sound waves bounce back to determine the size, shape, and consistency of soft tissues and organs.

These informations are produced on a computer screen in a real time. Ultrasound technicians, or sonographers, have special training in how to perform the test. Then a radiologist will interpret the ultrasound images. This technology can help diagnose and treat certain conditions.

Ultrasound also has therapeutic applications, which can be highly beneficial when used with dosage precautions relatively high power ultrasound can break up stony deposits or tissue, accelerate the effect of drugs in a targeted area, assist in the measurement of the elastic properties of tissue, and can be used to sort cells or small particles for research.

This article has been translated from WikiSkripta; ready for the editor's review.

Ultrasound waves can be produced by three kinds of generator:

High frequency causes the very short wavelength of the ultrasound waves, where pressure changes of the magnitude of MPa happen (danger of damage to cellular nuclei). On the borders between different tissues (with different speed of propagation of sound) a partial change of the direction of propagation happens, as well as their reflection (analogically to the law of refraction of light) → use in diagnostics.

Ultrasound generates an acoustic pulse that propagates with the speed of sound in the proper environment and a part of its energy is reflected on impact. The crystal then detects the reflections of the signal and determines the size of the echo, then the depth of the reflection from the time delay, too.

In ultrasound therapy, machines with the frequency of 0,8–1 MHz, the intensity of 0,5–3 W/cm2 and the exposition of 10 minutes are used most often.

In dentistry, vibrations with low amplitude (hundredths of mm) are used to remove tartar.

How ultrasound works in 60 sec: https://www.youtube.com/watch?v=I1Bdp2tMFsY

Ultrasonic cleaners, sometimes mistakenly called supersonic cleaners, are used at frequencies from 20 to 40 kHz for jewellery, lenses and other optical parts, watches, dental instruments, surgical instruments, diving regulators and industrial parts. An ultrasonic cleaner works mostly by energy released from the collapse of millions of microscopic cavitations near the dirty surface. The bubbles made by cavitation collapse forming tiny jets directed at the surface.