Rabies (Lyssa) is a viral infectious disease causing acute encephalitis. It is characterized by a long incubation period and a 100% mortality rate. Once clinical signs manifest, the disease is always fatal.[1]

The Czech Republic has been considered "Rabies-free" since 2004. It is possible to encounter imported rabies or rabies after a bat bite in the Czech Republic. There is an increased risk of rabies at the borders with Poland and Slovakia (these countries are not "Rabies-free").

The main vectors of the virus are various species of wild and domestic carnivores. Bats also play an important role in the epidemiology of rabies. Rabies is transmitted by contamination of a wound with infectious saliva from an infected animal. The main reservoir of rabies in Europe is the red fox, from which dogs are often infected. Oral vaccination of foxes has successfully eliminated rabies in western and central European countries. In our country, the last occurrence was recorded in 2002. 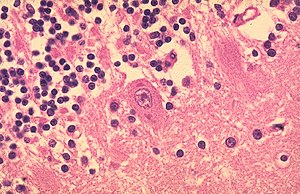 Characteristic Negri bodies in Purkinje cells of the cerebellum of a patient who died of rabies.

Rabies is caused by lyssavirus, a member of the rhabdoviridae group[2]. It is transmitted through when bitten by an infected animal through its saliva. The incubation period ranges from 10 days to several months. The most common range is 3-8 weeks but it can last for several years. The rabies virus is neurotropic, entering the cell via the acetylcholine receptor and replicating in the cytoplasm. Viral proteins then form intracytoplasmic inclusions visible in a light microscope and they are called Negri bodies (e.g. in Purkinje cells, but not necessarily in all cases). The virus spreads perineurally from the site of contamination to the CNS. It attacks the cerebral cortex, the medulla oblongata, the cranial nerve nuclei and the spinal ganglia.

The disease erupts after the virus begins a massive attack on brain cells. Depending on the virulence of the strain, it manifests itself in humans sooner or later:

After a few days:

Then comes the stage of pain when using his/her motor muscles, mainly swallowing and laryngeal muscles, the patient suffers from dysphagia and shortness of breath.

In the further course of the disease, excessive excitability appears:

Later, the anxiety and nervousness escalate, the patient becomes aggressive, rages, shows an absence of fear and other personality disorders. Most of these manifestations originate from pain following any stimulus that causes activation of nerve connections in the CNS.

The majority of those affected die of heart failure after fits of rage and especially in the convulsive stage. The disease always ends in death within a few days (usually 2 to 10 days after the onset of the disease[3]).

Viremia does not develop in rabies, and the virus, which spreads through the axoplasm of neurons, is protected for a long time from contact with cells of the immune system. In unvaccinated individuals, specific serum antibodies usually appear at the same time as the overt disease. An important sign of CNS infection is the finding of specific Ig in the cerebrospinal fluid.

The wound is first disinfected, and then the rabies vaccine is administered. Six doses must be administered - the last one after 90 days from the first. If they are injected in time, the virus does not enter the brain and the disease is cured.

A person who has come into contact with an infected animal must be vaccinated immediately. Vaccination can be taken at a later date, and usually the infected person has a decent chance if they start within a week of being bitten, but the risk of failure increases with increasing delay between the bite and the first dose. If the vaccination succeeds, the immunized organism will eradicate the infection before it reaches the brain.