Malnutrition is a pathological state caused by nutrient deficiency or excess. Advances stages are referred to as cachexia. The highest degree of cachexia is marasmus. Malnutrition can also be an isolated deficiency of one of the necessary nutritional factors (vitamins, trace elements, essential fatty acids). The causes of malnutrition include conditions associated with decreased intake, increased nutrient losses, or increased metabolic requirements.

Malnutrition is defined as a nutritional disorder due to absolute or relative nutrient deficiencies, excesses, or imbalances. Malnutrition can be classified in several ways:

Marasmus (simple starvation) is caused by an insufficient supply of energy and protein. It is accompanied by proportional reduction of fat and fat-free mass, and edema does not develop. Cachectic appearance is apparent at normal albumin concentration and preserved immunoreactivity is clinically evident. Nutritional support is able to restore anabolism. This occurs in anorexia nervosa.

Kwashiorkor is a stress-induced, cytokine-induced (TNF-α, IL-1, IL-6) malnutrition. The body is not able to use carbohydrates and lipids as an energy substrate. In combination with reduced protein intake, they must use visceral, plasma, and muscle proteins. The fat stores do not decrease and edema is present. Clinically, there is poor wound healing, pressure ulcers, and there is a risk for more frequent infections. This occurs in MODS and sepsis. Nutritional support is only able to slow down this type of malnutrition. 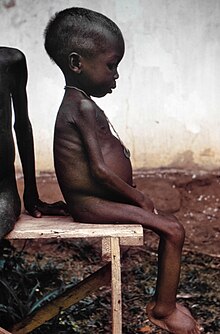 It is a combination of marasmus and kwashiorkor.