Intracranial hypertension is defined as an increase in intracranial pressure (ICP) above 20 mm Hg. Due to the strength of the calva, it can occur when any of the 3 basic intracranial compartments – brain tissue, cerebrospinal fluid and blood volume are enlarged.

The brain represents only 2 % of body mass, but cerebral perfusion represents 15 % of resting cardiac output, 20 % of O2 consumption. The brain is inherently an expansive structure and expands with each heartbeat. Because no valves are present during venous outflow from the brain, the change in intrathoracic pressure is reflected in the ICP value. A phenomenon that proves this statement is the pulsating large fontanelle even in some completely healthy children. The above-mentioned close relationship of intracranial pressure to intracranial pressure is the reason why we set PEEP values ​​as low as possible during artificial lung ventilation in patients with intracranial hypertension.

In an adult, the normal mean value of ICP is around 15 mm Hg, with a wider range of 2-20 mm Hg. For newborns, we tolerate values ​​< 10 mm Hg. The curve fluctuates slightly depending on the cardiac cycle.

The relationship between the volume of the skull and ICP is described by the Monro-Kellie doctrine – the cranial cavity has a fixed volume filled with three compartments - brain tissue, cerebrospinal fluid and blood, which are practically incompressible (due to the high proportion of water in brain tissue).

An increase in one of the compartments can be balanced by compensatory mechanisms: the movement of cerebrospinal fluid from the cranial cavity to the spinal canal, a decrease in the volume of blood in the skull (mainly in the veins) and certain elastic brain tissue. If the changes are slow, the elasticity and remodeling of the brain tissue will allow considerable compensation, for example in normotensive hydrocephalus. After exhausting these mechanisms, when one of the components increases ICP exponentially. The beginning of the failure of compensatory mechanisms can be observed during ICP monitoring, for example, by a transient increase in ICP, for example, during coughing or in response to suctioning from the airways, which should be a warning signal for the development of intracranial hypertension.

Cerebral perfusion pressure (CPP) is defined as the difference between arterial and venous pressure in the cerebral vessels. The magnitude of this pressure is essential to maintaining a good blood supply to the brain. Since venous pressure is difficult to monitor and is practically close to intracranial pressure, it is used to calculate the following equations:

From this equation, it follows that during the therapy of intracranial hypertension, in addition to monitoring one's own ICP, it is also necessary to maintain sufficient arterial pressure to maintain normal cerebral perfusion. 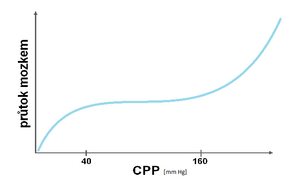 This property prevents the occurrence of ischemia or cerebral edema by providing relatively (CBF – cerebral blood flow) when the CPP changes in the regulatory lumen of the cerebral vessels. Physiologically, flow is stable in the CPP range of 40–160 mm Hg. Changes in flow depending on CPP are shown in the pressure-flow curve.

Cerebral blood volume (CBV) means the total amount of blood in the brain (arterial + venous blood) and represents approximately 5% of the intracranial volume. It is necessary to distinguish CBV from CBF (cerebral blood flow), as they represent a different starting point for own therapy. CBV is primarily involved in intracranial volume and pressure, whereas CBF does not primarily affect ICP. CBV is the volume of blood inside the vessels in the brain and is primarily determined by the lumen of arterioles and veins. By increasing CBV and thus ICP, CBF will decrease..

Clinicalsituations with increased metabolic activity such as convulsions or fever will be manifested by an increase in CMRO2, usually compensated by increased cerebral blood flow. Hypothermia reduce oxygen consumption. Conclusions for treatment options are then based on this assumption, i.e. reduction of the level of cerebral metabolism of sedation, antipyretics, antiepileptics so that the balance between CRMO2 and CBF is maintained. This is also a theoretical assumption for the so-called therapeutic barbiturate coma.

Based on the Monroe-Kelly doctrine, the cause can be an increase in one of three compartments - brain tissue, amount of cerebrospinal fluid and blood in the forehead. The causes can influence each other – the expansive process of the brain tissue can lead to obstructive hydrocephalus by obstructing the cerebrospinal fluid pathways or vasogenic edema by breaking the blood-brain barrier. Vasogenic edema can be complicated by cytotoxic edema, which can also be a consequence of ischemia due to various causes.

The cause of intracranial hypertension on the part of the brain tissue can be, for example:

80 % of CSF production takes place in plexus choroideus, the rest is produced by endothelial cells. It is an active process dependent on energy and the appropriate enzyme equipment. CSF is distributed to the cerebrospinal fluid and subarachnoid spaces. The CSF spaces are formed by two lateral chambers, the third chamber, the aqueduct, the fourth chamber and the spinal central canal. Resorption takes place through the arachnoid villi into the superior sagittal sinus. It is conditioned by the pressure gradient between brain pressure and venous blood pressure in the sagittal sinus. Another possibility is resorption in the area of ​​the spinal canal into the venous plexus in the sheaths of the spinal roots. A small portion of the CSF drains through the olfactory bulb and mucosa into the deep neck nodes.

An increased amount of blood in the intracranial space is present in all types of intracranial hemorrhage (subarachnoid hemorrhage, subdural hemorrhage, epidural hemorrhage, hCMP) and cerebral hyperemia (brain swelling). In cerebral hyperemia, there is a loss of autoregulation due to damage to the hypothalamus and brainstem, which leads to an increase in flow through the cerebral vessels, an increase in the volume of blood in the brain, which raises the ICP and, as a result, leads to obstruction of the venous outflow and thus a decrease in CPP and cerebral ischemia. This condition is more common in children.

Prodromal symptoms of intracranial hypertension include:

Clinical symptoms at a critical ICP value are hypertension, bradycardia and bradypnea ending in apnea.

A clinical examination in pediatrics includes a complete pediatric examination, including a tap on the calf (= sign of a cracked pot). As part of the neurological examination, it is necessary to evaluate the state of consciousness (GCS), musculoskeletal reflexes on DK, examination of the brainstem (cranial nerves), condition of the pupils (mydriasis, anisocoria), mobility of the bulbs (paresis, diplopia), evaluation of momentum in the area of ​​the facial nerve.

The basic and emergent examination for intracranial hypertension is CT of the head (we perform the examination only after securing and stabilizing the patient). A sign of cerebral edema on a CT scan is the effacement of gyrification, narrowing of the cerebral ventricles, and a decrease in the difference between the white and gray matter of the brain. An alarming symptom is the disappearance of the subarachnoid spaces, unfortunately this is already a late symptom. The EEG is usually postponed until after the CT examination due to the time requirement. Transcranial Doppler ultrasonography can also be used, and in infants, ultrasound through the "window" of the large fontanel.

With a unilaterally acting process, the displacement of the brain mass and the brain herniation can occur. 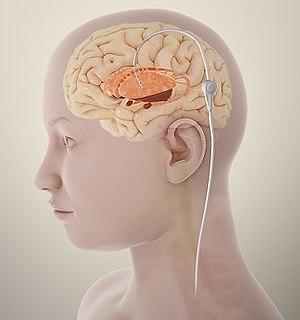 Nowadays, pressure sensors inserted directly into the tissues are used to monitor intracranial pressure. All methods are invasive with a risk of infection. All types of sensors are inserted by a neurosurgeon.

The gold standard in ICP monitoring is ventriculostomy – an intraventricularly introduced catheter that, in addition to accurate measurement of intracranial pressure, also allows pressure to be regulated by releasing cerebrospinal fluid.

Currently, intraparenchymal monitoring of intracranial pressure is most widely used (thin, introduced into the brain tissue with a small bore; high accuracy, simple installation). The pressure sensor is introduced from the hole above the non-dominant hemisphere (1 cm in front of the coronary suture) and in the sagittal plane interspersed with the pupil of the opposite side.

For supplementation within neurointensive care, we can use so-called multimodal focus monitoring, where temperature and pO2, pCO2 and pH sensors or microdialysis catheters can be introduced intracranially. Furthermore, monitoring of jugular blood oxygen saturation (SvjO2) is often used as part of multimodal monitoring, which makes it possible to determine the arteriovenous difference in cerebral circulation.

The risk of infectious complications increases significantly with the time of insertion of the sensor, it also increases with the frequency of evacuation of the cerebrospinal fluid during ventriculostomy. The risks of hemorrhage are 1.1 % with ventriculostomy, 2.8 % with intraparenchymal monitoring. Ventriculostomy obstruction occurs in 6.3 %. Sensor malfunction is very common, associated for example with inappropriate handling of the patient, its frequency is about 20%. ICP measurement also increases the risk of epilepsy, which is reported to be around 2-3 % with an intraparenchymal sensor. [1]

In addition to therapy for the primary disease, supportive therapy is used to reduce the risk of secondary brain tissue damage by increasing intracranial pressure. A manifestation of cerebral palsy is the clinical picture of a disorder of consciousness in an objective finding. Its severity is then guided by the indication for therapy.

The principles of care and monitoring are classified by some into graded protocols according to the manifestations of the severity of the disability. However, the classification of some therapeutic procedures varies in the literature.

Indications for intubation and artificial lung ventilation are:

Glasgow Coma Scale and Score is the basis for determining the impairment of consciousness.

We increase alveolar ventilation so that pCO2 values ​​of 4.0–4.5 kPa are reached when venous blood saturation in the jugular bulb is > 55 %.. The use of hyperventilation alone without the possibility of SvjO2 monitoring is risky – there is a risk of brain ischemia due to excessive vasoconstriction.

Treatment results are evaluated by the so-called Glasgow Outcome Scale (GOS) after 6 months: