Immunomodulators are drugs that stimulate the activity of the immune system. They modify the natural defense against infection and tumors. They are used in the therapy of tumors, infections, inflammation, autoimmune diseases, and AIDS.

Not only do they stimulate a response to a specific antigen, but their action is complex. The exact mechanism of action is usually unclear.

It has an immunomodulatory and antiviral effect. It inhibits viral replication and stimulates the maturation and differentiation of T-lymphocytes and the production of cytokines (INFγ). It is used to treat immunodeficient patients with severe or recurrent viral diseases (HSV, CMV, EBV, HPV), measles, or subacute sclerosing panencephalitis.
The most common side effect is an increase in serum uric acid levels (reversible). Furthermore, GIT difficulties, rashes, headaches, and arthralgia can be present. Hypersensitivity to uric acid or gout is a contraindication. It should not be given with immunosuppressants, medicines that increase uremia, and medicines that can cause kidney dysfunction.

It has antiviral and antitumor effects. Langerhans cells are activated after cutaneous application, inducing apoptosis. It is intended for the treatment of small superficial basal cell carcinomas, warts, and keratoses when no other therapy is possible.

A group of drugs that are made from the bodies of killed bacteria or parts of them. They can also be used in anticancer treatment (adjuvant treatment).

Treatment of tumors
The ability of mycobacteria to stimulate the immune system is used. Suspensions of attenuated Mycobacterium bovis (BCG) strains are used. Analogs of cell wall components can also be used (mifamurtide). They non-specifically activate the anti-inflammatory response, which indirectly elicits an anti-tumor response.
They are used for local treatment of bladder carcinomas and operable osteosarcoma in non-metastases.

This group includes substances produced by cells of the immune system, fibroblasts, endothelium, etc..., which can be collectively called cytokines.

Transfer factor
This is a peripheral blood leukocyte extract. It comprehensively stimulates the immune system. It activates chemotaxis and phagocytosis, induces cytokine production (anti-inflammatory effect), and normalizes the number of T-lymphocytes.
It is used mainly for secondary immune disorders.

Cytokines
These are important regulators of the immune responses. They are mostly produced using by recombinant human DNA. For example, a synthetic form of IL-2 (aldesleukin) is used. 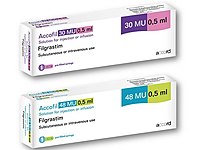 Interferon-α (IFN-α)
This is used in the treatment of chronic hepatitis B and C, cancer (leukemia, lymphoma, multiple myeloma, carcinoid, renal cell carcinoma, and malignant melanoma).

Tumor necrosis factor α (TNF-α)
This is used as an adjuvant or for palliative therapy of soft tissue sarcomas. E.g., tasonermin.

G-CSF (filgrastim)
Granulocyte stimulating factor. It is used to treat severe neutropenia (febrile, cyclic, idiopathic, after chemotherapy, in patients with advanced HIV infection). It is also used to reduce the duration of neutropenia in patients on myeloablative treatment before bone marrow transplantation.

This involves increasing an individual's defenses against a particular antigen. They are most often used for infectious diseases.

Methods used be divided into active and passive immunization.