A disease characterized by the presence of one or more ulcers in the wall of the stomach or duodenum.

The ulcer extends into the submucosa

Note: HP infection is the main cause of the gastric ulcer and HCl in duodenal hypersecretion.

Multiple duodenal ulcerations in a patient with Zollinger-Ellison syndrome 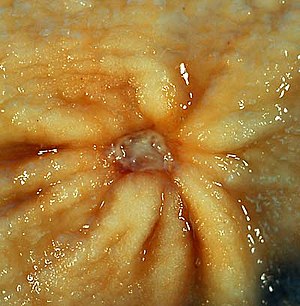 Ulcer disease is a chronic disease characterized by recurrent relapses over many years. The incidence of duodenal ulcer is 4-5 times higher compared to gastric ulcer. The etiology of the disease is not yet recognized.

Current prevention or treatment is possible as

Inhibition of factors leading to irritation and erosion of mucous membranes.

Advantages: they are very cheap, disadvantages: they leave the stomach contents very quickly, therefore they only lead to a temporary reduction in stomach acidity, they act briefly (1,5–2 hours).

They are used, for example, for heartburn. It cannot be used for a long time because: it could lead to systemic alkalosis, it is absorbed, CO2 is released upon reaction with HCl , which can lead to secondary mucosal irritation and hypersecretion of HCl.

Compounds acting as antagonists at the receptor level

Stimulation leading to HCl secretion is provided by 3 types of receptors:

Only the first two types can be damped.

Drugs with stronger affinity for gastric receptors are used (M1). It is used pirenzepine. Its effects are equal to H2 lytics, recurrences are less frequent.

Histamine H2 receptor antagonists, unlike their predecessor cimetidine, do not have antiandrogenic effects. Famotidine is more effective than ranitidine.

It is the first drug in this group to enter clinical use. Cimetidine has been shown endoscopically to lead to the healing of 85% of duodenal ulcers within 8 weeks of treatment, compared with 30% of those treated with placebo. The shortest time needed for healing is around 4 weeks, while the pain disappears within a few days. Healing of gastric ulcers reaches 75-80%. A more complication of treatment is more frequent recurrence of the ulcer (in 5-30%), then a long-term maintenance evening dose is chosen to suppress HCl secretion at night on an empty stomach. Smoking reduces the effects of cimetidine.

The main side effect of cimetidine is its antiandrogenic effect and subsequent gynecomastia.

Irreversible H+/K+ ATPase inhibitor - proton pumps. The pump exchanges K+, which travel into cells, for H+, which are secreted into the gastric lumen. Cl- forms HCl. Omeprazole is a lipophilic weakly basic substance that, after absorption, reaches the parietal cell via the bloodstream. Because the binding is irreversible, the enzymatic activity is restored only with the newly formed enzyme, ie after 18 hours. Omeprazole is the most effective inhibitor of HCl secretion. 70% of duodenal ulcers heal within 14 days, 95-100% within 4 weeks. Gastric healing is slower (depending on size and location), but practically all of them heal within 8 weeks. Doses of 20-40 mg daily are used for treatment. Omeprazole is also effective in H2 lytic resistant ulcers , severe reflux oesophagitis and Zollinger-Ellison syndrome. Omeprazole also appears to reduce the incidence of H. pylori. Tolerance of omeprazole is very good, there are no serious drug interactions during treatment. A newer related substance with similar effects is pantoprazole.

Substances which inhibit to eliminate H.pylori

Complex salt of citric acid. In an acidic gastric environment, it precipitates with proteins released by the erosive action of HCl in the ulcer area. The stable complexes thus formed adhere to the base of the ulcer and form a protective layer. It also prevents the activation of pepsinogen, inactivates the finished pepsin chemically. Bismuth salts have a direct toxic effect on H. pylori strains.

They form a protective layer of mucus, have a special affinity for the base of the ulcer, which they cover and protect against the effects of HCl. It binds bile acids and pepsin, stimulates the production of endogenous prostaglandins, and increases mucus production. Co-administration of antacids is not recommended. Ulcer healing follows after 4 weeks of treatment in 80%, after 6 weeks in 90%. Relapse is less common. Side effects: 2.2% constipation (most common), less common: dry mouth, dyspepsia.

They reduce HCl secretion and have a cytoprotective effect. The main use is in preventive administration in patients treated with non-steroidal anti-inflammatory drugs.