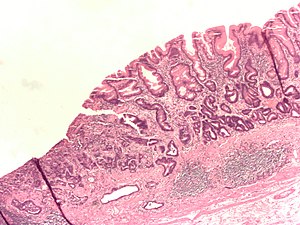 Adenokarcinoma of stomach – HE mount 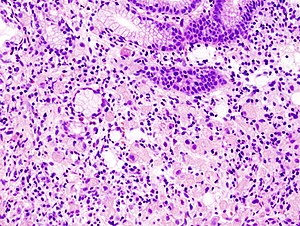 Gastric carcinoma is a cancer of the stomach wall that is currently the fourth leading cause of cancer death in Europe. It is the second most common malignant disease worldwide. Gastric cancer develops through a complex multistage process with several distinct histological and pathophysiological phases. The whole development is influenced by a complex of interactions between bacteria, the environment, the genetic dispositions of the host and molecular mechanisms. Many of the etiologies and pathogenesis of this disease remain unclear, but the underlying context is already known.