Under construction / Forgotten
This article has been translated from WikiSkripta; ready for the editor's review.

Food consists of nutrients, liquids, minerals and vitamins. Individual nutrients (saccharides, fats and protein) are used by the organism as building blocks. The process of digestion is necessary for these substances, usually taken up as complicated organic compounds, to be absorbed by the small intestine.

By digestion we understand the chemical process of dissolution of matter by specific enzymes. Digestive enzymes are produced by gland cells in the oral cavity, the stomach and the exocrine part of the pancreas. The small intestine is important because it facilitates the transport of amino acids, fatty acids and sugars through its mucosa into blood or lymph vessels. This process is called resorption. The mucosa of the small intestine consists mainly of two types of cells:

Multiple mechanisms allow the absorption of nutrients from the lumen of the small intestine into the extracellular fluid, such as diffusion, facilitated diffusion, active transport and pinocytosis.

Cellulose, hemicellulose and pectin are some of indigestible plant polysaccharides. They are not important as a source of nutrients, but rather as a component of fiber. While indigestible by humans, it is being consumed by the bacteria of the colon. It also lowers cholesterol levels in blood and plays a role in the prevention of colon cancer. It influences the regulation of colon functions as well.

The digestion of starch begins in the mouth under the effect of ptyalin, a salivary enzyme. Its activity is diminished by the acidic contents of the stomach, but later continues in the duodenum under the influence of the pancreatic α-amylase. The basic pancreatic juice neutralizes the acidic chyme flowing into the duodenum from the stomach, which allows the pancreatic amylase to finish the cleaving of starch and glycogen into shorter saccharides (maltose, maltotriose, and oligosaccharides like α-dextrin). The resorption of sacccharides concerns only monosaccharides, which means the enzymes included in the brush border of enterocytes must finalize the cleaving of oligosaccharides created there.

The final products of saccharide digestion are single-unit sugars – glucose, galactose, fructose. These monosaccharides are transported into the enterocytes. Glucose and galactose utilize secondary active transport along with Na+ ions by SGLT-1 &-2 transporters. Fructose is taken up through the facilitated diffusion utilized by GLUT-5 transporters. Glucose is taken up from the enterocyte into the tributary venules of the portal vein by the facilitated diffusion of the GLUT-2 transporter. Fructose is mostly transformed into glucose by the way of fructose-6-phosphate and glucose-6-phosphate, though a small part enters the blood stream by the GLUT-2 transporter as well.

Fats are ingested in the form of triacylglycerols (up to 90%), phospholipids and cholesterol esters. Lipids are poorly soluble in water, so triacylglycerols are cleaved by lipases, which are produced by the Ebner glands of the root of the tongue, the gastric glands, and the acinar cells of the pancreas.

The process of digestion of lipids[edit | edit source]

Approximately 10-30% of triacylglycerols are digested in the stomach, where the acidic pH ensures the optimal conditions for the activity of the lingual and gastric lipase. The rest is cleaved by pancreatic lipase in a pH neutral environment of the duodenum and jejunum. For optimal lipase activity, fat emulsification is necessary, which gives the enzymes a larger surface area for the process. In the stomach, fats are emulsified mechanically by the motility of the aboral part of the stomach, in the small intestine by bile acid salts and lecithin. The lipolytic effect of pancreatic lipase is conditioned by the presence of colipase, which as an enzyme of pancreatic juice binds to fat droplets. Digestion of triacylglycerols results in free fatty acids, mono- and diacylglycerols. These products are converted with the participation of bile acid salts into micelles, which are a necessary condition for the normal absorption of fats. 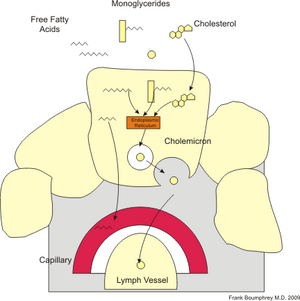 The micelles travel between the microvilli and their contents are dispersed in a slow-moving fluid. At this place the lipids reach high concentrations and thanks to their hydrophobic properties diffuse through the luminal membrane of enterocytes. They accumulate in the vesicles of the smooth endoplasmic reticulum, where they again form lipid molecules. Their surface is covered by phospholipids and β-lipoprotein formed in the ribosomes of enterocytes.This creates chylomicrons (fat droplets), which leave the cell by exocytosis into the basolateral space. Because chylomicrons are too large, they would not pass through the basement membrane into the blood capillaries, and so they enter the lymphatic capillaries and enter the blood with the lymph. Most fats are absorbed in the duodenum and jejunum. The remaining bile acids are absorbed in the terminal ileum, from there they diffuse or are transported by active transport across the luminal membrane and finally pass through the basolateral membrane into the blood.They enter the liver through the portal circulation, where they are excreted into the bile with newly formed bile acids.

The digestion of proteins begins in the stomach under the effect of the pepsin endopeptidase. Pepsin is secreted as an inactive proenzyme by the chief cells of the fundus and the corpus of the stomach. Its precursor is pepsinogen, which is transformed by the hydrochloric acid into pepsin. The acidic gastric environment within 1,8-4 pH is optimal for its activity. This activity is stifled in the small intestine once the contents of the stomach mix with the basic pancreatic juices. Other proteolytic enzymes are introduced in the duodenum among the pancreatic juices. They are responsible for the breaking of polypeptides created by the gastric digestion. These endopeptidases (trypsin, chymotrypsin and elastase) and carboxypeptidases (procarboxypeptidase A & B and inactive forms of the enzymes) cleave inner peptide bonds or single amino acids at the carboxyl ends of the protein chains, respectively. The cleavage into final products (amino acids) takes place either in the intestinal lumen, or in the brush border of the enterocytes, or in the cytoplasm of the mucosal cells.

Amino acids released by digestion are transported from the lumen through the interstitium into the bloodstream by specialized transport systems in both the luminal and the basolateral sides of the membrane. The absorption on the luminal side is done by specialized transporters for different individual types of amino acids. On the basolateral side, the absorption is done by diffusion.

Neutral and acidic amino acids are transported in the mucosal cells by secondarily-active Na+ symports and later they enter the bloodstream passively or tied to a carrier protein.

Basic amino acids (arginin, lysin, ornitin) have their own transport systems. Part of the amino acids is absorbed as dipeptids or tripeptids by secondarily active transport utilizing co-transport with the sodium. This form of absorption is faster. The dipeptides and tripeptides are cleaved into single amino acids by cytoplasmic enzymes of the enterocytes.

A person’s daily intake of water is about 2 liters. Aside from that, approximately 7 liters are excreted into the gastrointestinal tract within saliva, gastric juice, pancreatic juice, bile and intestinal juice. Only 100-200 ml of water is excreted in feces and almost 98% of this amount must be absorbed.

Water moves though the gastrointestinal wall passively in both directions. Absorption takes place mainly in the jejunum and the ileum. The movement of water though the intestine is based on osmosis. The small intestine is relatively permeable to water and the absorbed liquid is isotonic. The colon is less permeable and the absorbed liquid is hypertonic. The effectiveness of absorption may be influenced by its disorders. The presence of osmotically active substances that cannot be absorbed increases the speed at which the intestine’s contents are passed. As a result, not enough time is left for the absorption processes. The unabsorbed matter acts like a laxative, which results in liquid stool. The effectiveness of water absorption is also lowered by increased blood pressure in the portal circulation.

Na+ ions are absorbed by the intestine in its entire length. On the luminal side, the ions enter three ways, always under the effect of the Na+/K+-ATPase:

The stool is scarce on both Na+ and Cl- ions as well as water, but about a third of Ca2+ is excreted in it.

Vitamins are low-molecular organic substances essential in small doses for the correct function of the organism. The body cannot synthesize them (with a few exceptions), so we must take them in through food. They function as a part of metabolism and its regulation.

The fat soluble vitamins (A, D, E, K) enter the enterocytes through diffusion as micelles, after which they become part of chylomicra.

The water soluble vitamins are absorbed in the proximal part of the small intestine. They are absorbed actively through the Na+ symport. Only vitamin B6 enters the intestinal wall through diffusion. Vitamin B12 (cobalamin) must be taken in food. The most important sources of animal cobalamin are liver, kidneys, meat, fish and eggs. In the stomach and the duodenum it bonds with a glycoprotein (intrinsic factor) produced by the parietal cells of the gastric mucosa. Coupled this way it is later absorbed through endocytosis. In the cytoplasm it is uncoupled from intrinsic factor and actively transported through the basolateral membrane into the bloodstream. From here it is moved to the liver bound to a protein.

Calcium is absorbed in all parts of the intestine, but mostly in the jejunum and the ileum. The Ca2+ ions are transported into the cytoplasm bound to specific proteins on the luminal side of the enterocyte. In the cytoplasm they bind to the cytoplasmic calcium-binding protein or they enter the mitochondria. The intake of calcium is modulated by vitamin D and parathormon.

Iron taken in food is absorbed only in small amounts. About 15-20 mg of iron is taken by food every day. An adult absorbs 1 to 1,5 mg a day, pregnant women and children absorb more. Heme iron is the easiest to absorb. Also, Fe2+ ions are absorbed better than Fe3+, because the former doesn’t form non-soluble compounds. In the intestine, iron is bound to transferrin, which binds to a specific receptor on the luminal side of the enterocyte and is transported into the cytoplasm by endocytosis. In the cytoplasm, iron is released and bound to the cytoplasmatic ferritin. Part of the iron supply is sparated (amount essential to the organism) and moved into the bloodstream, where it bins to the plasmatic transferrin. The rest of iron is returned into the contents of the intestine and excreted in stool.