Primary active transport utilizes energy in form of ATP to transport molecules across a membrane against their concentration gradient. Therefore, all groups of ATP-powered pumps contain one or more binding sites for ATP, which are always present on the cytosolic face of the membrane.

Based on the transport mechanism as well as genetic and structural homology, there are considered four classes of ATP-dependent ion pumps:

The P-, F- and V-classes only transport ions, while the ABC superfamily also transports small molecules.

The energy expended by cells to maintain the concentration gradients of some ions across the plasma and intracellular membranes is considerable:

The functional mechanism of these pumps is the phosphorylation of the α (alpha) subunit by the ATP, which will induce a change in its conformation and making transport possible. Example:

Location: is present in cell membranes of most animal cells.


Function: is responsible for maintaining the Na+ and K+ concentration differences across the cell membrane (osmotic stability), for establishing a negative electrical voltage inside the cell (bioelectricity), for secondary active transport and also provides the suitable environment for the metabolic pathways occur.


Mechanism of action:
1- The binding of 3 Na+ and
2- The subsequent phosphorylation by ATP of the cytoplasmic face of the pump induce the protein to undergo a conformational change that
3- Transfers the 3 Na+ across the membrane and releases it on the outside.
4- Then, the binding of 2 K+ on the extracellular surface and
5- The subsequent dephosphorylation return the protein to its original conformation, which
6- Transfers the 2 K+ across the membrane and releases it into the cytosol.[1]

Location: is present in sarcoplasmic reticulum (SERCA) and plasma membranes (PMCA) of many cells.


Function: catalyzes ATP-dependent transport of Ca2+ away from the cytosol, into the SR lumen or out of the cell.


Mechanism of action:
1- Helices 4 and 6 are disrupted in the unphosphorylated state and form the Ca2+-binding site on the cytosolic side of the membrane.
2- ATP binding and hydrolysis cause drastic conformational changes, bringing the nucleotide-binding (N) and phosphorylation (P) domains into close proximity.
3- This change is thought to cause a 90° rotation of the actuator domain (A), which leads to a rearrangement of the transmembrane helices.
4- The rearrangement eliminates the breaks in helices 4 and 6 abolishing the Ca2+-binding sites and releasing the Ca2+ ions on the other side of the membrane into the lumen of the sarcoplasmic reticulum.[2]

Location: stomach and in the distal tubules and cortical collecting ducts of the kidneys.


Function: it is involved in acid secretion in the stomach by catalyzing ATP-dependent transport of H+ out of the gastric parietal cell (toward the stomach lumen) in exchange for K+ entering the cell. In the renal tubules are special intercalated cells that secrete large amounts of H+ from the blood into the urine for the purpose of eliminating excess H+ from the body fluids. 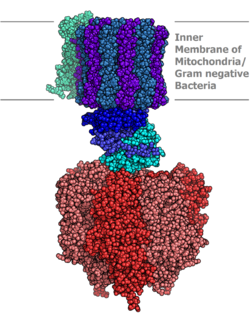 Location: it is present in animal lysosomal and endosomal membranes and plant vacuole membranes.


Function: it is responsible for maintaining a lower pH inside the organelles than in the surrounding cytosol, which is important for the activity of the lysosomal and endosomal enzymes.

It only pumps H+ (proton) and its activity does not involve a phosphoprotein as an intermediate.
Location: is found in bacterial plasma membranes, in mitochondria and chloroplasts.


Function: it has an important role in ATP synthesis, and so can also be called ATP synthase.


Mechanism of action: this pump usually runs in the opposite direction, generating ATP by using the protonmotive force created by the electron transport chain as a source of energy. The general process of creating energy in this way is called oxidative phosphorylation. This process takes place in the mitochondria, where ATP synthase is located in the inner mitochondrial membrane.

It is also known as ATP-binding cassette. Each ABC protein is specific for a single substrate or group of related substrates. All ABC transport proteins contain 4 core domains: 2 transmembrane (T) domains, which form a pathway for solute movement and determine substrate specificity and 2 cytosolic ATP-binding (A) domains It includes more than 100 different transport proteins found in organisms ranging from bacteria to humans.