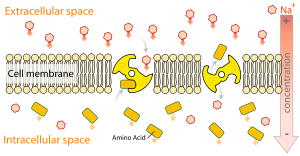 Secondary active transport, is transport of molecules across the cell membrane utilizing energy in other forms than ATP. This energy comes from the electrochemical gradient created by pumping ions out of the cell. This Co-Transport can be either via antiport or symport.

The formation of the electrochemical gradient which enables the co-transport is made by the primary active transport of Na+. Na+ is actively transport out of the cell creating a much higher concentration extracellular than intracellular. This gradient becomes energy as the excess Sodium is constantly trying to diffuse to the interior.

These transporters occur especially through the epithelial cells of the intestinal tract and the renal tubules of the kidneys to enable absorption of these substances into blood.