Helicobacter pylori is a Gram-negative, microaerobic human pathogen, and H. pylori infection is strongly related to many gastroduodenal diseases including chronic active gastritis, peptic ulcer diseases, atrophic gastritis, mucosa-associated lymphoid tissue (MALT) lymphoma, and noncardia gastric cancer (In 1994, H. pylori was recognized, as the only bacteria, as a type I carcinogen, and now it is considered the most common etiologic agent of infection-related cancers). H. pylori infection affects more than half of the adult population worldwide, but the prevalence of H. pylori infection varies widely by geographic area, age, race, and socioeconomic status.

Accurate diagnosis of Helicobacter pylori infection is a crucial part of the effective management of many gastroduodenal diseases. Several invasive and non-invasive diagnostic tests are available for the detection of H. pylori and each test has its usefulness and limitations in different clinical situations. Although none can be considered as a single gold standard in clinical practice, several techniques have been developed to give more reliable results.

Invasive tests are performed via endoscopic biopsy specimens and these tests include histology, culture, rapid urease test as well as molecular methods. Developments of endoscopic equipment also contribute to the real-time diagnosis of H. pylori during endoscopy. 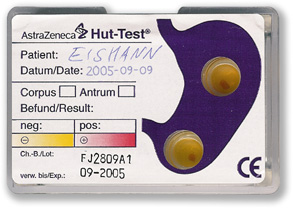 Urea breathing test and stool antigen test are the most widely used non-invasive tests, whereas serology is useful in screening and epidemiological studies. Molecular methods have been used in variable specimens other than gastric mucosa. More than detection of H. pylori infection, several tests are introduced into the evaluation of virulence factors and antibiotic sensitivity of H. pylori, as well as screening precancerous lesions and gastric cancer.

GastroPanel is a first-line non-invasive diagnostic blood test for dyspeptic patients. It gives information on the structure and function of the stomach mucosa, and of the risks caused by a possible abnormal inner lining. Based on the results, it is possible to get information to support the diagnosis of: