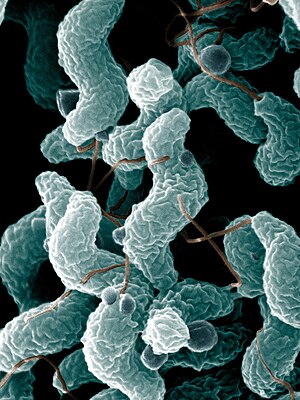 Campylobacter enteritis or campylobacteriosis is a worldwide zoonosis manifesting as an acute diarrheal disease. The causative agent is the bacterium Campylobacter jejuni.

Infection is caused by gram-negative, spiral-shaped microaerophilic bacteria of the family Campylobacteraceae. Most infections are caused by Campylobacter jejuni; other species, including C. coli, also cause infection. C. jejuni and C. coli are carried normally in the intestinal tracts of many domestic and wild animals.

The pathogenic microbe is transmitted to humans directly from animals or indirectly from animal products and water. The most common route of infection is alimentary, ie. by ingesting contaminated unpasteurized milk and milk products, water and insufficiently heat-treated meat - mainly poultry and beef (steaks, steak tartare). Campylobacter penetrates the mucosa of the jejunum, ileum and duodenum and causes enterocolitis. If the microbe enters the bloodstream, a generalized disease develops. Virulence factors are invasion (protein and lipopolysaccharide antigen is anchored in campylobacter membranes) and adenylate cyclase activating enterotoxins.

The infectious dose is thought to be small, typically fewer than 500 organisms.
Campylobacteriosis is a common cause of travelers’ diarrhea (TD). The percentage of bacteria-caused TD due to Campylobacter ranges from 1% to 2% in Mexico to 28% in Thailand.

The geographic distribution of cases is worldwide; risk for infection is higher in the developing world, especially in areas with poor restaurant hygiene and inadequate sanitation.

Incubation period is typically 2–11 days.[1] Than typical clinical signs appear - an increase in temperature and headache. After another 12-24 hours, colic-like abdominal pain occurs, often in the right lower quadrant (right hip syndrome) - appear as appendicitis, bloody diarrhea mixed with leukocytes and mucus and nausea. Most patients do not vomit. These symptoms usually last from two to six days. The main complication is dehydration. Reactive arthritis, Reiter's syndrome or erythema nodosum may develop on an immunopathological basis at intervals of several days to a week. More severe presentations can occur, including bloodstream infection and disease mimicking acute appendicitis or ulcerative colitis.

Diagnosis is based on isolation of the organism from stools by using selective media and reduced oxygen tension. Most laboratories also combine this with incubation at 42° C (107.6° F).


Visualization of motile and curved, spiral or S-shaped rods by stool phase-contrast or darkfield microscopy can provide rapid presumptive evidence for Campylobacter enteritis.

With a mild course, no treatment is needed, the main importance is hydration, or. compensation for mineral losses. Spasmolytics can be given for colic . The disease is generally self-limited and may last up to a week.


Antibiotic therapy may decrease the duration of symptoms if administered early in the course of disease. Because it is generally not possible to distinguish Campylobacteriosis from other etiologies of TD, the use of empiric antibiotics in travelers should follow the guidelines for TD.


It can be very difficult , especially in children.[2][3]

A diet without fats and simple sugars - carrots, rice ... helps to stabilize.

Campylobacter infection can be a trigger for Guillain–Barré syndrome.
Additional information can be found on the Division of Foodborne, Bacterial and Mycotic Diseases’ website: www.cdc.gov/ncidod/dbmd/diseaseinfo/campylobacter_g.htm.