This article has been translated from WikiSkripta; ready for the editor's review.

The formation of tumor tissue is a genetically determined process. Tumor cell proliferation has escaped the control of the Cell Cycle, which is affected by specific genes. According to the proliferation activity, we distinguish two basic types of tumors

The cause of metastasizing is among other things, caused by genetically gained changes in activity of proteolytic enzymes and changes in cell surface adhesion molecules. 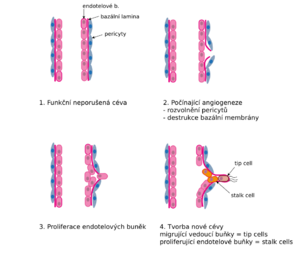 A fundamental feature of both primary tumors and metastases in distant organs, is the ability to induce the formation of their own vascular system - angiogenesis. The production of angiogenic factors is promoted both by tumor cell genes and by the activation of similar genes in neighboring non-tumor cells. Endothelial vascular cell proliferation and new vascularization occur.

These factors affect the formation of a new vascular system:

In a growing tumor occurs

Cooperation between these components leads either to the proliferation of endothelial vascular cells or, conversely, to the inhibition of their proliferation. Among angiogenesis inhibitors is for example included tumor necrosis factor-beta (TNF-β).

The length of the malignant process[edit | edit source]

The genetic causes of malignant transformation are:

Tumor growth may also be promoted by surrounding tissues; for example, inflammation that is accompanied by the production of cytokines, the excess of which may contribute to tumor growth.

The gradual accumulation of mutations in several different genes of the same cell causes a malignant cell reversal. Malignant transformation can be initiated by a single cell, and clonal proliferation of a cell with an accumulated number of mutations (see below) results in tumor formation (hypothesis of clonal tumor origin; confirmed for most tumors). For some types of tumors, there are known mutations of genes specific for them (marker genes). Cumulation of 2-3 mutated genes is common in hematological malignancies; Carcinomas and sarcomas are caused by the accumulation of a number of mutations (4-6). It has recently been confirmed[1] that a tumor can arise from two different mutant clones, where malignant transformation has occured in cells due to different mechanisms by paracrine signalisation ( the tumor is formed by mixing two mutant cell clones ).

Malignant tumors of the same organ can arise in different individuals by accumulating mutations in different genes.

Approximately every third citizen in the Czech republic will develop some form of cancer. The same type of cancer, which occurs sporadically, can have a hereditary incidence (5 %–10 % of cancers). In the case of hereditary occurrence, Genomic Imprinting (manifestation of certain genes depending on whether they were transmitted from the father or the mother) may be applied.

Ataxia telangiectasia – movement disorder, growth retardation, neurological and immunological disorders. Numerous leukemias and lymphomas. Extreme X-ray sensitivity; the use of X-rays for diagnosis is recommended only when necessary.

Bloom syndrome – low birth weight, extremely small stature. A typical rash on the face that worsens due to sunlight. Disposition to malignant tumors.

Xeroderma pigmentosum – extreme sensitivity to sun exposure associated with skin tumors (squamous cell carcinomas of the epithelium, melanomas) at a very early age (75 % of the patients have skin tumors up to the age of eight).

Aging of the organism and tumor incidence[edit | edit source]

Most cancers are diagnosed at an advanced age (eg colon and rectal tumors, breast tumors, prostate tumors). However, there are also certain types of tumors with a specific incidence in childhood and in younger individuals (eg retinoblastoma, Wilms' tumor, leukemia, lymphomas).

The higher incidence of malignancies in aging individuals is related to the endogenous causes that accompany aging. In this regard, tumors can be considered a genetic disease of old cells in which mutations have accumulated during the aging process. The frequency of mutations is affected by both the quality of the environment and endogeneous DNA damage (eg DNA replication errors). The probability of mutations increases with age and the ability to repair damage decreases.

The higher incidence of cancer in the elderly may be due to telomere shortening.Telomere erosion of somatic cell nuclear chromosomes can cause changes in the structure or number of chromosomes that either lead to genetically programmed cell death or can cause malignant transformation.

In older individuals, there is increased DNA damage by free oxygen radicals. During chronological aging, superoxide dismutase activity decreases (participates in the reaction with free oxygen radicals) and as a result, free radicals decompose more slowly. The end result is the acceleration of degenerative changes in the tissues.

In the early stages of cancer, an individual's immune system can recognize and eliminate transformed cells that have different antigenic determinants from normal cells. In particular, T cell-mediated immunity is involved in anti-tumor immunity. Some cytokines show antitumor activity; eg interleukins, interferons, tumor necrosis factor (TNF alfa, TNF beta). NK cells (natural killers) and a category of cells called LAK (heterogeneous population of lymphokine activated cells) are significantly involved in the antitumor response. The activity of both NK and LAK cells is not bound to the presence of MHC molecules. NK cells respond immediately, being the first natural defense system in the early stages of tumor growth.