Genomic imprinting is an epigenetic process where some genes inherited from our parents are not active. Most of our genes have two copies - the first one we get from the mother and the second one from the father. Usually both of them are "turned-on". Often it is not important if you get one copy from each parent or if you get both copies from your mother or your father. Genomic imprinting is an exception. Imprinted genes are functional only when they are inherited from the right parent’s genome.

Most of the genes are not inherited by the rules of the genomic imprinting. The scientists found two main regions of these genes. Their location is:

We are not able to explain why just these genes. The symptoms of diseases which are connected with genomic imprinting are very different according to the affected chromosome (uniparental disomies - see below).

How do we recognize the right parent’s gene?

The parent of origin is marked. The mark is a methyl group which is connected to the DNA. These methyl groups can help us to recognize which genes were inherited from the mother or the father. Methylation can be used as a marker for the control of gene activity too. Imprinted genes show high level of the methylation.

Uniparental disomy occurs when we receive both copies of the gene from one parent. For example:

The mistakes can occur during the formation of reproduction cells (eggs and sperm cells) or later - during early fetal time.

The severity of damage depends on the affected areas. As we have already said, most of the genes are not imprinted. If mistake occurs in these regions, nothing happens. Damages of imprinted genes on chromosomes 11 and 15 lead to few syndromes: 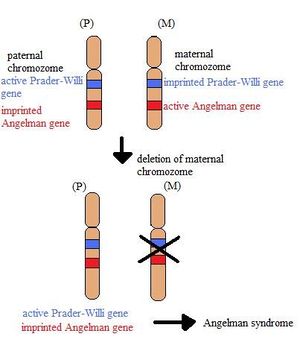