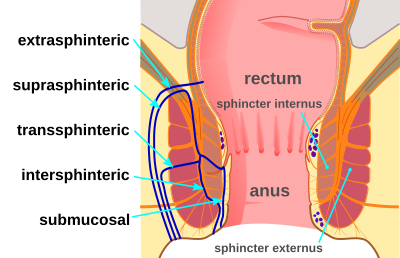 Fistulas can be classified according to their relationship to the rectum - rectal and periproctal (perianal). Furthermore, we divide them into complete and incomplete according to whether they have external and internal orifices (complete) or only one (incomplete, more often external). A complex (complicated) fistula is a fistula that has an inner orifice that extends above the puborectalis muscle or its tract surrounds more than 3/4 of the external sphincter.

According to the anatomical position of the tract, fistulas can be classified as:

Symptoms include secretions, itching, and wetting of the fistula's surroundings as well as contamination of underwear with stool or pus. Pain occurs when the contents stagnate and the drainage stops. Swelling, bleeding, and feelings of fullness and pressure in the rectum may also occur. Subfebrile symptoms may also occur. It is common for affected individuals to experience symptomatic periods interrupted by asymptomatic periods of various lengths of time. An internal fistula may not manifest clinically at all.