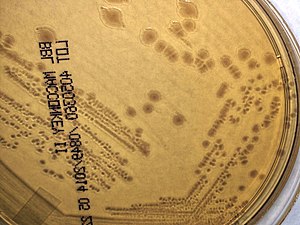 You can find more information on the page Yersinia pestis.

It is undemanding to cultivation, it is cultivated on common soils. It is widespread cosmopolitanly and has been isolated from several animal species such as cats, dogs, pigs, monkeys, and more. Y. pseudotuberculosis is widespread in the environment (feces, water), where it can survive for a long time. The environment itself is contaminated with the faeces of infected animals, especially rodents and birds. In addition to animals, it was also found in water, both in rivers and in alpine streams.

We can distinguish 5 serotypes according to somatic antigen.

The toxin bound in the cell is different from the plague toxin. Virulent strands can cause the septicemic form akin to the plague especially in individuals with a weakened immune system. Gastrointestinal tract diseases such as acute and chronic appendicitis, gastroenteritis, or disorders of mesenteric lymph nodes occur much more often. Infections with Y. pseudotuberculosis were reported all around the world. These infections happen less frequently than infections by Yersinia enterocolitica. Most of the infections are sporadic and arise rarely, e.g., outbreaks in Finland and Japan.

The disease manifests itself in humans with fever, rashes, abdominal pain, and diarrhea. Yersinia pseudotuberculosis has been associated with Kawasaki disease.

Laboratory tests are obtained from stool, urine, or blood tests for bacterial antibodies. Serotyping of an isolated strain. Antibiotics are used for treatment. We must not forget that the patient may be dehydrated due to fever and diarrhea. Rehydration of the patient is necessary.