Figure 55 - different types of X-rays, based on its energy.

X-rays are a form of electromagnetic radiation of a wavelength in the range of 0.01 to 10 nanometers, and energies in the range 100 eV to 100 keV. They were initially discovered by Wilhelm Conrad Röntgen in 1895.

In medical X-ray tubes the target is usually tungsten or a more crack-resistant alloy of rhenium (5%) and tungsten (95%), but sometimes molybdenum for more specialized applications, such as when soft X-rays are needed as in mammography. 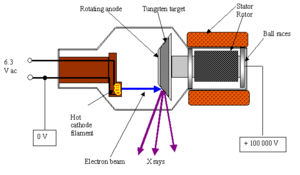 In fact, the energy that is added to an X-ray tube is not completely transformed into an x-ray. Only one percent of energy is / becomes an x-ray and the rest of it is transformed into heat. This is why rotating anode x-ray tubes are used in medical applications. Because of the fact that the x-ray tube is evacuated there is no good conduction of heat. Simply rotating the anode gives more area where this heat can be spread, than in a fixed anode tube.

After we create an X-ray we also have to detect it somehow as they are not visible by the naked eye. X-ray detectors vary in shape and function depending on their purpose. Imaging detectors such as those used for radiography where originally based on photographic plates and later photographic film but are now mostly replaced by various digital detector types such as image plates or flat panel detectors.

Since Röntgen's discovery that X-rays can identify bone structures, X-rays have been used for medical imaging. The first medical use was less than a month after his paper on the subject. These days it is a very simple imaging method that is used frequently in clinical praxis. A radiograph is an X-ray image obtained by placing a part of the patient in front of an X-ray detector and then illuminating it with a short X-ray pulse. Bones contain a lot of calcium, which due to its relatively high atomic number absorbs x-rays efficiently. This reduces the amount of X-rays reaching the detector in the shadow of the bones, making them clearly visible on the radiograph. The lungs and trapped gas also show up clearly because of lower absorption compared to tissue, while differences between tissue types are harder to see. 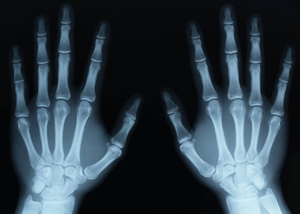 Radiographs are useful in the detection of pathology of the skeletal system as well as for detecting some disease processes in soft tissues. Some notable examples are the very common chest X-ray, which can be used to identify lung diseases such as pneumonia, lung cancer or pulmonary edema, and the abdominal X-ray, which can detect intestinal obstruction, free air (from visceral perforations) and free fluid (in ascites). X-rays may also be used to detect pathology such as gallstones (which are rarely radiopaque) or kidney stones, which are often (but not always) visible. Traditional plain X-rays are less useful in the imaging of soft tissues such as the brain or muscle.

Dental radiography is commonly used in the diagnoses of common oral problems, such as cavities.

In medical diagnostic applications, the low energy (soft) X-rays are unwanted, since they are totally absorbed by the body, increasing the radiation dose without contributing to the image. Hence, a thin metal sheet, often of aluminium, called an X-ray filter, is usually placed over the window of the X-ray tube, absorbing the low energy part in the spectrum. This is called hardening the beam since it shifts the center of the spectrum towards higher energy (or harder) x-rays.

To generate an image of the cardiovascular system, including the arteries and veins (angiography) an initial image is taken of the anatomical region of interest. A second image is then taken of the same region after an iodinated contrast agent has been injected into the blood vessels within this area. These two images are then digitally subtracted, leaving an image of only the iodinated contrast outlining the blood vessels. The radiologist or surgeon then compares the image obtained to normal anatomical images in order to determine if there is any damage or blockage of the vessel. 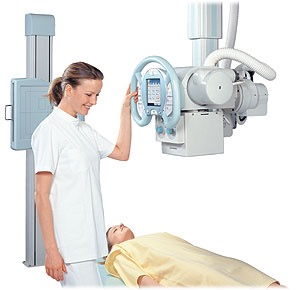 Diagnostic X-rays (primarily from CT scans due to the large dose used) increase the risk of developmental problems and cancer in those exposed.

Next chapter: 6.4 COMPUTED TOMOGRAPHY (CT)
Back to Contents